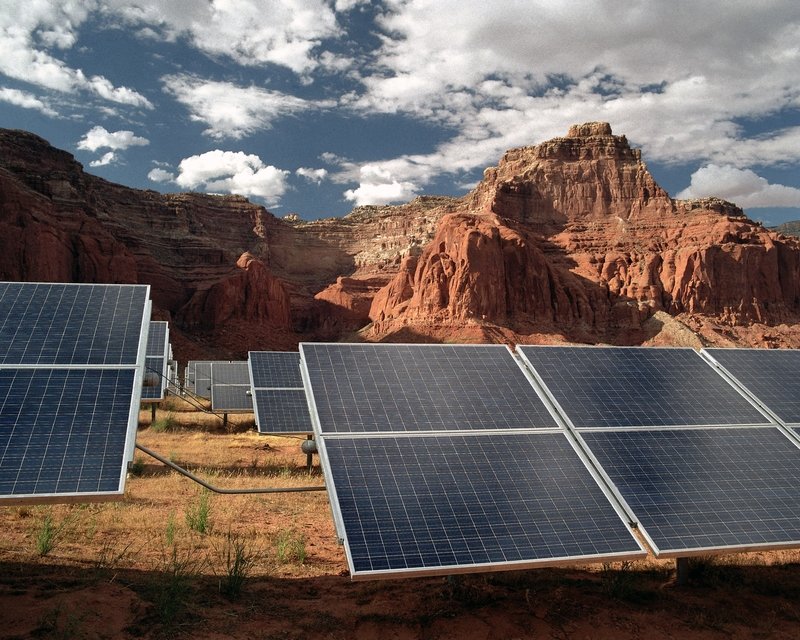 Hopi Tribe has received grant funding and has been selected as a finalist for the Economic Development Administration’s Build Back Better Regional Challenge for impacted coal communities. Hopi’s economy has been impacted by the closure of the Navajo Generating Station coal facility, and this large scale solar project represents an opportunity to shift the tribe’s energy and economic policy.

Native News Online: Can you tell us what's going on at Hopi with the energy supply, especially your plans to move to solar energy?

Carroll Onsae: We have an energy provider on the reservation, however, over the years, Hopi have experienced blackouts and brownouts. To see if Hopi can provide power through their own means, they formed Hopi Utilities Corporation. With the pandemic, there's some grant opportunities that came down. Solar may not be a 100% answer to their power situation and power needs, but maybe a combination of solar and regular power sources.

Native News Online: Is the utilities company owned by the tribe, or is it a cooperative?

Carroll Onsae: No, the current utility company is Arizona Public Service. They've been providing power on the reservation for a lot of years. But we're isolated. We're a reservation within another reservation. So I think Hopi has attempted to, or maybe currently is working with APS to bring up its power resources.

Native News Online: With these grant opportunities, what does the future of solar look like? What's the timeline?

Carroll Onsae: Well, this Economic Development Administration grant that we received goes to communities that have lost assets, revenue streams, or services due to power-plant closures and coal mining activities. Hopi is attempting to apply for funds to help with restoring some of the lost revenue and lost assets. It's not really replacing APS. APS is a partner with Hopi and looking into this development effort we're trying to do. The project is a solar farm that would generate electricity for a large-power user, which would be located right next to the solar farm. We're thinking it might be a data center of some kind.

Native News Online: So if I understand correctly, Hopi did receive the EDA grant? How much did they give the tribe?

Carroll Onsae: Well, there's two phases to this thing. Phase one is a planning phase, for which they gave $500,000. During this phase, the recipients will create or develop proposals. In our case, it will be this project that I just described. If, and this is a big if, we are successful in our submission, then we would be awarded funds to build out.

Native News Online: So you’re initially granted $500,000 to plan something, and then you have to submit your plan, and they will potentially fund that project. Where are you at in that planning stage?

Carroll Onsae: There's a short timeframe in which to submit your proposal. I believe it's by March 15. What we're doing is working with potential partners for this project. We're working with a power supplier for backup power, in case it starts raining and there's no sunlight for a period of time. We're also looking at some potential energy users that would locate on the site. We've identified a location on the reservation, and we are moving through the process of obtaining a land assignment.

Carroll Onsae: Right now, there are several options for the data center. We haven't narrowed it down or received any commitment from these companies. The Hopi tribe would prefer to be 100% owner. However, if the award is not enough to build out to what we want, then we'll have to look for other sources of funds to complete the entire project. That may mean some investment opportunities to help build the structures and the system.

Native News Online: What exactly would the data center do, or who will it be for?

Carroll Onsae: That I don't know yet. We have a consultant helping us with reaching out to these potential partners. These discussions are always under a non-disclosure agreement, so I'm not under authority to divulge any specific information.

Native News Online: Right now the predominant energy source on the reservation is coal, through Arizona Public Services, and the hope is to develop a solar farm that would power a data center that would be used for economic development by the tribe. Consumers would continue to get electricity from Arizona Public Services, and the solar farm would only provide energy for the data center, which would hopefully provide revenue for the tribe.

Carroll Onsae: Right. But there's a long-term vision for this thing. We are also conducting a feasibility study. If HUC, the Hopi Utilities Corporation, can become the primary power provider, either through partnering with Arizona Public Services, purchasing their facilities, or combining solar with the current power source. We haven't reached any conclusions. But depending upon what we find, this particular project could expand to providing power to the reservation end-users, and not just the data center. So this is a beginning for the Hopi tribe to really strategize its economic development situation and its needs. Hopi villages could use that revenue stream for more things, like to improve their water systems

We’re also looking at workforce development. That's to train Hopis either to manage or operate the solar-power and the data-center systems. If there's some spillover from this project to other, smaller economic development projects, that would provide jobs for people on the reservation. It expands to the education of our young Hopi individuals, because this system would be highly technical. It would require science, technology, engineering, and math curricula. This would be one way of keeping talent and intelligence on the reservation.

Native News Online: Is there anything you want to add?

Carroll Onsae: This is an enormous opportunity to rewrite our energy history and our economic development history. The hope is that this will be a starting point, to bring a brighter future for the Hopi tribal members. I think it'll serve the Hopi tribe tremendously to help its self-determination efforts, with benefits that we bring to the Hopi people from its youngest members to its eldest. We're excited.