With the Trump Administration, It’s All About Energy — and Sweeney is Complicit 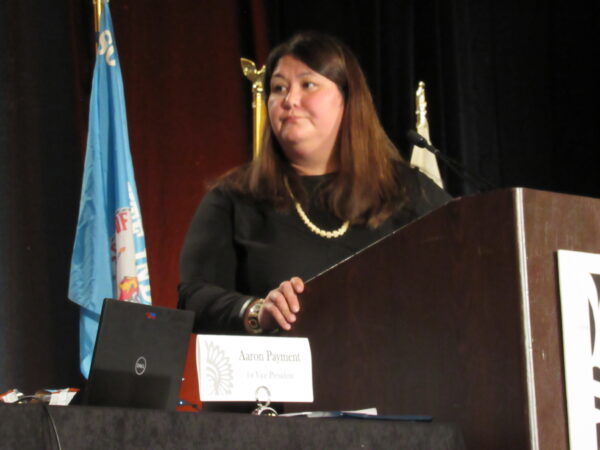 Assistant Secretary of Indian Affairs Tara MacLean Sweeney may be taking the heat, but the problem at the Department of the Interior goes beyond her office.

Last Thursday, five leading American Indian organizations called on Interior Secretary David Bernhardt to remove Sweeney from her post as the nation’s top public official for Indian affairs, citing her failure to fulfill her duties as trustee to the 574 federally recognized tribes.

Nominated by the president of the United States and then confirmed by the U.S. Senate, the Indian Affairs Secretary is charged with assisting the Interior Secretary with the United States’ trust responsibilities to the federally recognized tribes. Even though the Indian Affairs Secretary is a political appointee, the person in that position should be loyal to the tribes, and should work hard to protect the best interests of the tribes, not those of the President.

For the past 21 months, there have been tensions between Sweeney and the tribes. It started when she affixed her signature, as one of her first official duties, to a letter that determined that the Mashpee Wampanoag Tribe trust land was to be taken out of trust by the Trump administration, undoing efforts of the Obama administration.

Sound familiar? Trump has worked aggressively to undo anything Obama had put into place within the federal government.

The next month, Sweeney showed up at the National Congress of American Indians convention in Denver and the tribes were not happy. I was present and remember remarking to several people that there was so much tension in the room, you could cut it with a knife. Tensions became more intense when she tried to defend herself by saying that she had little choice in the matter. However, that didn’t ring true with tribal leaders and they began to question her loyalty.

Because the Trump administration dragged its feet in making political appointments to key positions such as Assistant Secretary of Indian Affairs, Sweeney did not assume her post until August 2018.

Sweeney, an Alaska Native, came to the BIA from the Arctic Slope Regional Corporation. Prior to that she was an oil and gas lobbyist.

With that resume, Sweeney has ties and loyalties to the energy industry. A major goal of the Trump administration has been to increase domestic oil and deregulate the Environmental Protection Agency (EPA).

“Our goal is to reduce the regulatory burden for the right-of-way approval process and sustainably develop their natural resources,” Sweeney said before a Senate Committee on Indian Affairs hearing on April 10, 2019. In that same hearing, Sweeney told the senators that one of Indian Affairs’ economic development focal points is the development of energy and natural resources.

So while Sweeney may be taking the heat these days, the problems with the Trump administration wagging its tongue at unused energy on tribal lands did not start with her.

I remember the first Tuesday in December 2016, one month after Donald Trump won the presidency, I sat down for coffee at Standing Rock with a friend and fellow American Indian journalist who had embedded herself there to cover the biggest American Indian story since the 1973 Wounded Knee occupation by the American Indian Movement. Remarkably, this time she didn’t want to talk about Standing Rock. She wanted to discuss Congressman Markwayne Mullin, a Republican and Cherokee Nation citizen, who co-chaired Trump’s Native American Affairs Coalition during the presidential campaign. Earlier that day, the national press picked up on the fact that Mullin had endorsed privatizing tribal lands to tap into energy products, such as oil, natural gas and even coal.

Mullin later backed away from the issue of privatization of tribal lands, but the tone was set.

Sadly, Sweeney seemingly sits back and does nothing to defend tribal concerns when it comes to energy matters.

In her inaction, she becomes complicit.

The current tribal checkpoint crisis in South Dakota — where Governor Kristi Noem threatened legal action against the Cheyenne River Sioux Tribe and Oglala Sioux Tribe if they did not remove roadside checkpoints — now stinks of oil.

The Republican Noem, a Trump acolyte, last week said the issue is about more than the checkpoints being in place to stop the spread of the coronavirus. She said tribes may want to put up checkpoints in the future. The implication:  Tribes do not want the Keystone XL pipeline coming near their reservations, and the checkpoints could get in the way of the Noem’s oil agenda.

Where is Tara MacLean Sweeney in this fight?

The letter from the five organizations cite four areas that Sweeney failed to meet her trust responsibilities including the reversal of the Mashpee Wampanoag Tribe trust issues; her failure to protect and preserve lands rights of the Tohono O’odham Nation in the recent desecration of unmarked ancestral burial sites; Sweeney’s recent handling of her input into allocation of CARES Act funds to tribes; and the Department of the Interior’s denial of “Alaska Native villages in their statutory and regulatory rights to acquire lands in trust via the Alaska Indian Reorganization Act and its incorporation of the Indian Reorganization Act of 1934.”

While the greed of the Trump administration regarding energy sources did not start with Sweeney, she clearly is complicit in their efforts. She has failed to show loyalty to the tribes she is supposed to serve, and has shown way too much loyalty to her boss, the President. She needs to go.