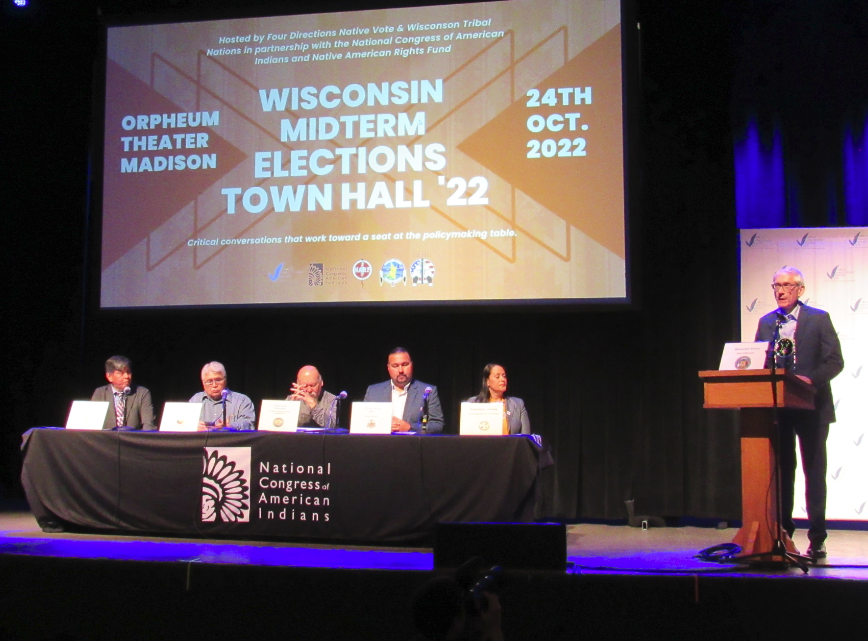 OJ Semans, Sr., co-founder of Four Directions, said the organization chose Wisconsin to hold the forum because it is a battleground state.

“This race in Wisconsin is going to be coming down maybe a couple of thousand votes, If not less, It's going to be that highly contested. And so, it's really important that tribal leaders throughout Wisconsin talk to their members and get out the vote,” Semans said.

Wisconsin Gov. Tony Evers, a Democrat, was the major candidate who showed up in person for the forum. Stockbridge-Munsee Mohican Tribe President Shannon Holsey introduced the governor who has worked closely with Wisconsin tribes during the past four years.

Halsey said: “We know that there is an assault on democracy, and it's very delicate. And when I say democracy is very delicate, I don't mean delicate like a flower. I mean, delicate like a bomb, and we need somebody that is going to strike that balance and bring all different voices together, and come up to a resolution of what we need to do to be as Wisconsin citizens in a unified way to make the state as great. I know what Governor Evers has already done.”

Evers told the crowd he respects the sovereignty of the Wisconsin tribes and has during his time as leader of the state’s government governed himself to ensure the tribes were part of discussions of any state policy that would impact the tribes.

“I really appreciate the opportunity to talk about our relationship with our sovereign tribal nations. The word sovereignty means a lot to me. I have an understanding of what sovereignty is. I always felt that all the tribal nations of Wisconsin were sovereign. As a result of that, we spend a lot of time together. We have monthly phone calls to discuss issues. During the pandemic,we worked together–sometimes daily–to make sure that the people who reside in the tribal nations are kept safe and healthy,” Evers told Wisconsin tribal leaders.

The goal of the forum was to energize the Native vote in Wisconsin and across Indian Country to get out and vote in the midterm elections.

Larry Wright (Ponca), executive director of the National Congress of American Indians, spoke about the impact of the Native vote.

"When we go to the polls and voice our opinions we honor those who came before and made sacrifices precisely so that we can determine our own futures in 2020, that is precisely what Native voters did. The Native vote made a huge impact on that election. Despite the challenges posed by COVID 19 pandemic Indian Country was engaged in local and national voting as evidenced by the fact that turnout in 2020 among Native Americans, voters was the highest it's ever been. Data analyzed by NCAIi even showed that the American Indian and Alaska Native voting percentage in seven states was larger than the voting margin that determined the winner,” Wright said.