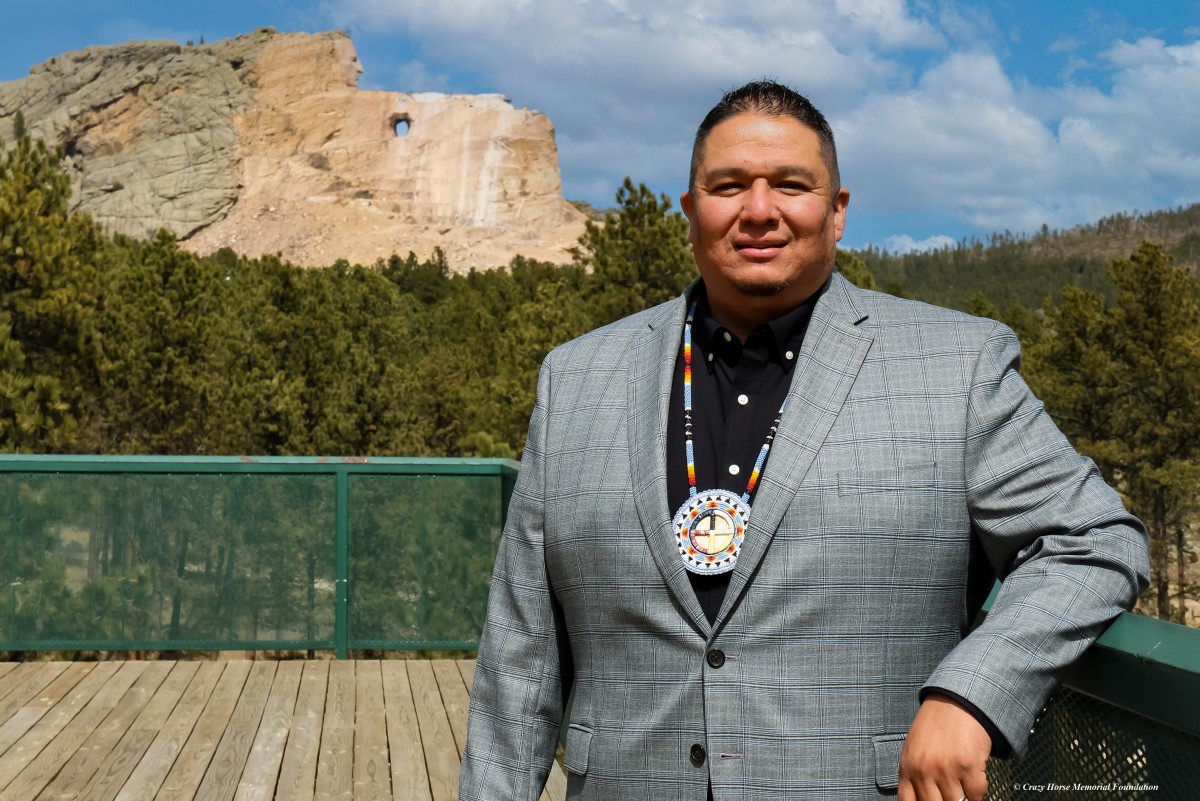 On August 2nd, Whitney Rencountre took the helm of the Crazy Horse Memorial Foundation as its new Chief Executive Officer. Rencountre is Hunkpati Dakota from the Crow Creek Dakota Indian Reservation and is the former Associate Director of the Indian University of North America.

When Rencountre learned of his new position, he was “full of emotion… I was honored, excited, and was just thinking about our ancestors and how much they loved the Black Hills,” Rencountre told Native News Online.

“To be in a capacity to educate people, to inspire people to build bridges among people, and to help the world understand the beauty of our ancestors through a process of healing is what dreams are made of,” he said.

The Crazy Horse Memorial Foundation started off as a mountain carving of the Mniconjou and Oglala Lakota leader Tasunka Witko—Crazy Horse—by Korczak Ziolkowski on May 3, 1947.

The Crazy Horse Memorial Foundation encompasses a campus that includes the Indian Museum of North America, the Native American Educational and Cultural Center, the Indian University of North America, a restaurant, gift shop, and theater highlighting the history of the largest mountain carving in the world.

The organization’s mission is “to protect and preserve the culture, tradition, and living heritage of the North American Indians,” something Rencountre says his entire life has been about. “I’ve dedicated my life to this mission and it has been my family and our communities a lot of hope,” Rencountre told Native News Online.

“I was really excited, and also really proud of him because I got to see all the work he put in to himself and the community before this position,” Jessie Taken Alive-Rencountre, Whitneys wife told Native News Online. “I’ve seen his role as a leader really grow over the years, and he has the ability to bring people together.”

When he did get the job, Taken Alive-Rencountre  said “it just validated the dreams I had,” sharing that she had a dream earlier this year that Whitney became the new CEO of the the Crazy Horse Memorial Foundation.

Taken Alive-Rencountre  is an accomplished author who has published four books and was recognized as the Great Plains Emerging Tribal Writer by South Dakota State University in 2017 for her book, “Peta Shows Misun the Light.”

“As a Dakota person, I think he will do a great job in bringing our perspectives as Native people to the organization,” Taken Alive-Rencountre said of her husband’s future. “People are very excited and proud to have one of our people in that position—we have a voice now.”

“Whitney often speaks of the importance of ‘building bridges’ and is widely known for his ability to establish strong relationships, forge alliances, and connect with advocates, supporters, and volunteers,” Crazy Horse Memorial Foundation board of directors chair, Steve Helmers said in a statement on the foundation’s website. “Further, Whitney honors his heritage as a member of the Crow Creek Hunkpati Dakota Nation through his commitment to family, and to work that promotes respect and healing among people of diverse cultures.”

The Crazy Horse Memorial Foundation does not accept funding from any state or federal government entity, relying entirely on donations and visitors to the largest active mountain-carving in the world.