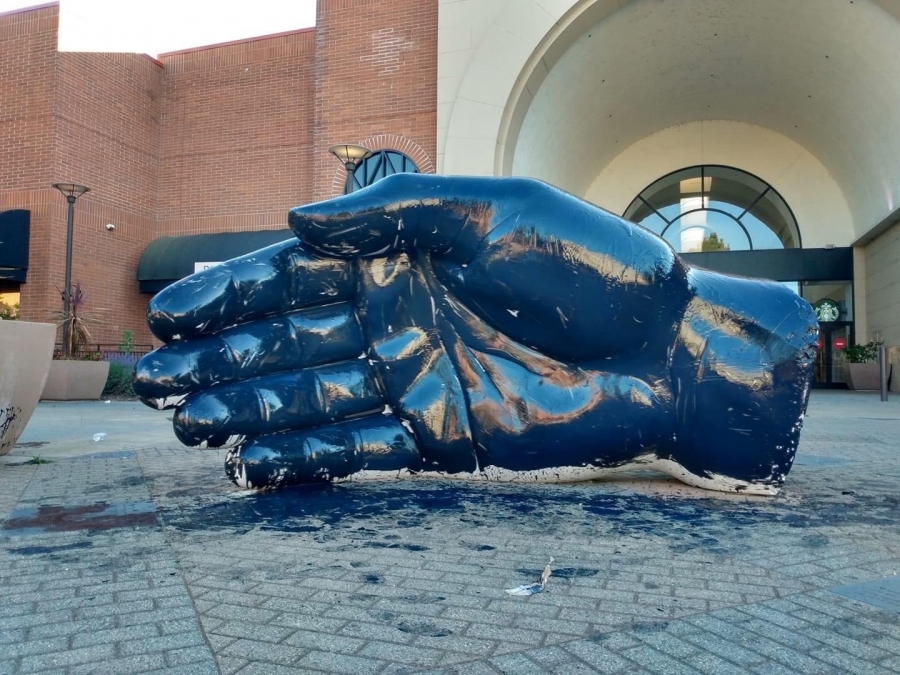 SANTA ROSA, Calif. — A sculpture of a white hand in Santa Rosa, Calif. has been repeatedly painted black in solidarity with the Black Lives Matter movement and the protests that followed after George Floyd was killed by Minnesota police in late May, despite the fact that the monument partially honors California’s Indigenous people.

Located in the Santa Rosa Plaza, the 7½-ton hand statue happens to be white, but was not created to represent white people. It’s whiteness stems from the fact it was carved from Carrara Italian Marble, out of the same quarry in Italy where Michelangelo pulled his work, a material which artist Larry Kirkland said he favored when he created this multicultural themed public art piece in 1996.

Kirkland is an internationally known artist. He’s best known for his universally themed environmental design, civil rights and civic-minded public art works located around the world, like “PASSAGE” at the National Center for Civil and Human Rights in Atlanta, Ga., the American Veterans Disabled for Life Memorial in Washington, D.C. and the Civil Rights Garden in Atlantic City, N.J.

According to Kirkland, the sculpture “Agraria” was commissioned as a “testament to the countless hands from all these cultures that have worked the soil and built the communities of Sonoma County.” The piece rests on a brick plaza embedded with granite plaques with multicultural images and texts taken from the history, peoples and cultures of the region, including a dedication to the first peoples of that land, the Pomo people.

“The tiles reference a variety of cultures, I uncovered as much history as I could,” Kirkland said. “Obviously the people who were doing the damage had no idea what the intention was.”

In a KCBS Radio interview, Santa Rosa Police Chief Rainer Navarro said his department believes the vandalism done during a youth-led Black Lives Matters protest was probably planned. “Somebody was carrying around a lot of buckets of paint to be able to do that,” he said.

It is unclear if those who committed the act of vandalism or if the Santa Rosa residents who continue to advocate for the defacement of the sculpture knew the piece was in fact a tribute to both the first peoples and to all races who placed their hands in the region’s soil. In the same radio interview, a Santa Rosa resident said she believed it made “the piece more relevant and advances the message of the Black Lives Matter protest.”

“Agraria” acknowledges the Pomo; the Indigenous Pomo peoples are among some of the cultures to whom plaques throughout the plaza are dedicated to. There are more than 20 Pomo Indian tribes and rancherias in Northern California. The term “Pomo” was created by academics and early settlers to describe “people with similarities in languages and religions,” said Ramón Billy, tribal historic preservation officer for the Hopland Band of Pomo Indians.

“Pomo represents multiple communities with a varied cultural history, an ongoing circle we are part of,” Billy said. Sho-Ka-Wah, which translates to “east of the river” in the Central Pomo language, is the name citizens of the Hopland Band of Pomo Indians use for themselves.

Although Billy’s people have been stewarding the land “since the beginning of time,” their agriculture practices in the 18th and 19th centuries were not voluntary. “Our people were enslaved by the Spaniards, the unsettlers, when they needed ranch workers, they’d raid and take our Sonoma and Mendocino villagers,” he said.

Because the sculpture is a tribute to all cultures who had worked the region with their hands, Kirkland thought perhaps the situation could be rectified by a multicultural approach.

“Maybe they could craft some form of public engagement,” said Kirkland, who noted that the sculpture’s future is up to the owners of the plaza and the city because although privately owned, it was commissioned through a public art and private development ordinance. “I’m curious what kind of thoughtful process will happen with the owners and the city. Hopefully they make it a thoughtful process and inclusive as they can be,” he said.

The Art in Public Places Committee was designated by the Santa Rosa City Council to advise the council and staff on the implementation of the Public Art Policy. The Public Art in Private Development Ordinance states that any “removal, relocation, or replacement of the public art must be consistent with the California Preservation of Works of Art Act and the Federal Visual Artists' Rights Act and any other relevant law.”

In response to the white hand sculpture being painted black, Billy stressed his disdain toward pigmentocracy, a term used to describe the hierarchy system among those with different skin tones regardless of race or social standing.

“There should be better treatment toward those who have no justice. That’s why we have no peace,” he said.