The 2019 western Badland only saw a limited theatrical release, but the six-shooter flick featuring Native American film legend Wes Studi has since found a second life on Netflix.

Released late last year to little buzz, the old-school style indie-western (which stars the likes of Kevin Makely, Mira Sorvino, Jeff Fahey, Trace Adkins and Bruce Dern) has now reached the Top 10 list on the popular streaming service. Watch the trailer here. Makley, who both produced and starred in Badland, said he was surprised by the support it received from at-home viewers. “It’s unreal,” Makely told the Albuquerque Journal late last week. “When it came out to Netflix, there wasn’t any advertising. The fact that it has organically grown throughout the entire country and peaked at No. 3, it’s mind-blowing. I have so much gratitude, and I still don’t know how to process it.” In the film, detective Matthias Breecher (Makley) is hired to track down the worst of the Confederate war criminals. As he roams the Old West, he is further tested when he meets a determined, mysterious pioneer woman. Upon its release in fall 2019, a Variety review by Joe Leydon called Badland “a solidly crafted piece of work that, despite its leisurely pacing, manages to infuse a respectable amount of fresh vigor into clichés and conventions common to shoot-’em-ups set during the post-Civil War era.” Studi, 72, who portrays Harlan Red in Badland, is also set to star in a string of other upcoming projects While still in pre-production—and on-hold due to the COVID-10 pandemic—his future workload includes spots in these films: Into the Fire, Mountain Summer, Candles, Duke City, Nothing, Arizona, Terra Infirmaand The Pipeline. 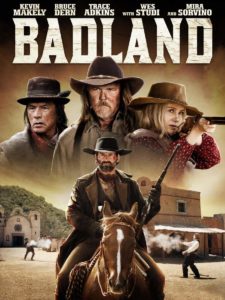 While he’s enjoyed Hollywood success since the 1980s, in a candid 2018 NPR interview, Studi recalled his humble upbringing in the Cherokee Nation of eastern Oklahoma, where he was born and raised in the Nofire Hollow valley.

“In the beginning, we were pretty much subsistence farmers and hunters," he told NPR’s Steve Inskeep. “As a child, I remember going into town by wagon one time and it was an all-day journey. “We didn’t have electricity, but we did have relatives who lived above and beyond the hollow that we lived in,” he added. “They were one of the first families in the area, in the Cherokee Nation, to have electricity. And that was the first time I ever saw television, was when I was maybe 4 years old or thereabouts … That was the first that we ever encountered electricity and television and what we consider, you know, part of the modern world these days.”