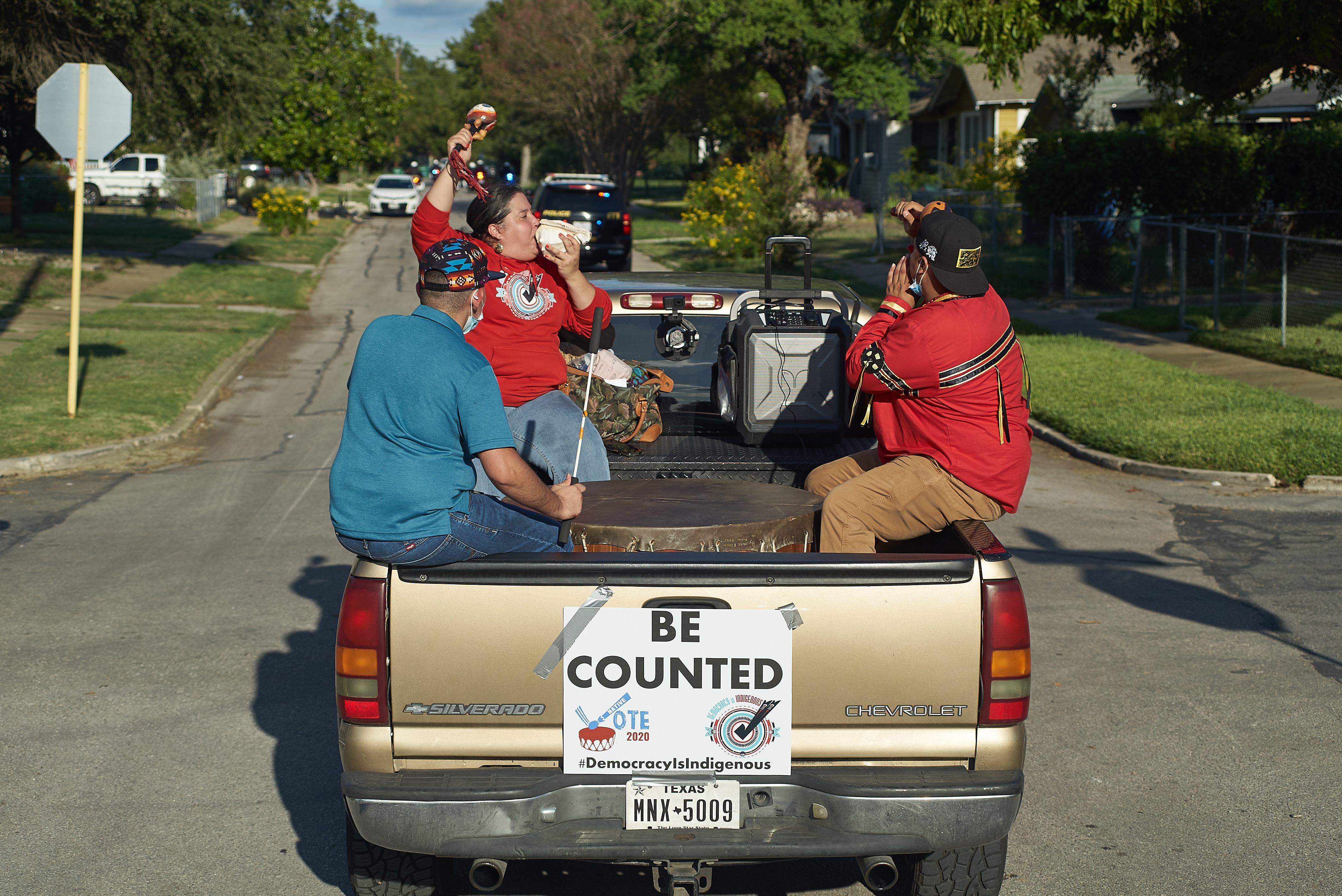 A video depicting cars waving Trump flags surrounding a Biden bus in Texas made the rounds online last week, and even appeared on the president’s Twitter feed. Voting rights activists say incidents like these are some of the biggest factors suppressing Native votes in the Lone Star state, which has a history of voter intimidation and suppression. Just last week, the Texas Supreme Court held that Gov. Greg Abbott could order counties to supply only one ballot drop box apiece, even though some counties can take hours to drive across.

Young people are voting in Texas in record numbers because “everyone is really anxious to have their vote heard,” David Donatti, attorney for the ACLU of Texas, said. “Lots of people want to get their vote heard, and limiting people's options in that way disproportionately impacts communities of color.” The ACLU lost its case against Abbott on the ballot box issue.

“Native Americans in Texas have the same uphill challenges to voting as they do in many other places,” San Antonio-based voting rights activist Jennifer K. Falcon (Fort Peck Assiniboine Sioux Tribal Nation) said. “Texas has historically been a state that has suppressed the vote of Black, Indigenous and people of color, and even poor and vulnerable communities.”

Although more than 100,000 Native people call Texas home, including three federally recognized tribes and many state-recognized Tribes, neither major political party has a Native American caucus. “There's intimidation even coming from the processes,” said Juan Mancias, Tribal Chair for the Carrizo/Comecrudo Tribe of Texas and former Democratic county chairman. The attitude, according to Mancias, translates to “‘why do you want to continue being Native? You're an American.’ They don't realize that we were here before they became American.”

This lack of representation, both in the caucuses and in the candidates running for office, creates a chilling effect for Native votes, according to Mancias. He added that many Texans don’t even know there are still Native people living in the state, meaning their vote is often not protected.

“We are the invisible population,” said Ramon Juan Vasquez, executive director of American Indians in Texas at the Spanish Colonial Missions (Tap Pilam Coahuiltecan). Because of this, he said voter suppression is just as prevalent among Native voters as it is for other marginalized groups. Vasquez has organized voter registration drives throughout the San Antonio area to “lift up the profile of the American Indians, not only in Bexar County, but in other counties and in the state of Texas,” he said.

Another major issue plaguing the elections in Texas this year is voter intimidation and harassment, which Donatti said the ACLU has responded to via its hotline, and has “so far been able to identify and remedy any instance of voter harassment, often by working directly with the county,” he said. “There are really clear rules about what people can and can't do around the polls.”

Even before one arrives at the polls, however, voter intimidation can be a problem for people trying to cast their ballot. Both Falcon and Mancias have seen instances of militias in San Antonio dressed to intimidate voters, and “Pro-Trump trains,” or caravans, parading through cities. (A recent study released by the Armed Conflict Location & Event Data Project puts Texas at “moderate risk” for increased militia activity surrounding the election.)

“That is, in a way, kind of like voter suppression,” Falcon said. “There is an anxiousness right now in Texas about what's going to happen with these militias. Regardless of what happens, if there's a Biden win, there's anxiousness around them being unable to accept that, and Trump not leaving power. I think that they've really been emboldened during this time.”

However, some Native people in Texas say voting has been relatively easy. Christi Sullivan, director of media and communications for the Alabama-Coushatta Tribe of Texas, said that the reservation has had a ballot box on-site for as long as she has lived in the area, and that voter turnout this year has been high in her community. Robert Soto, vice chairman of the Lipan Apache Tribe of Texas, said that although his tribe doesn’t have a reservation, the ballot box isn’t far from where many tribal members live.

For others, the reduced number of ballot boxes, along with the heightened threat of intimidation at the polls, may still prevent some from casting their vote. But Donatti sees another lesson. “If people's vote didn't matter, they wouldn't be trying so hard to suppress it,” he said. “In Texas and elsewhere, different groups have tried to put up every single obstacle imaginable to people actually voting, and having their votes counted.”

But despite all of this, Donatti remains undeterred in his work with the ACLU. “All those barriers are surmountable,” he said. “That's why we're seeing the voter turnout that we're seeing. And I'm really excited about it. I haven't been heartened by democracy in a while.”