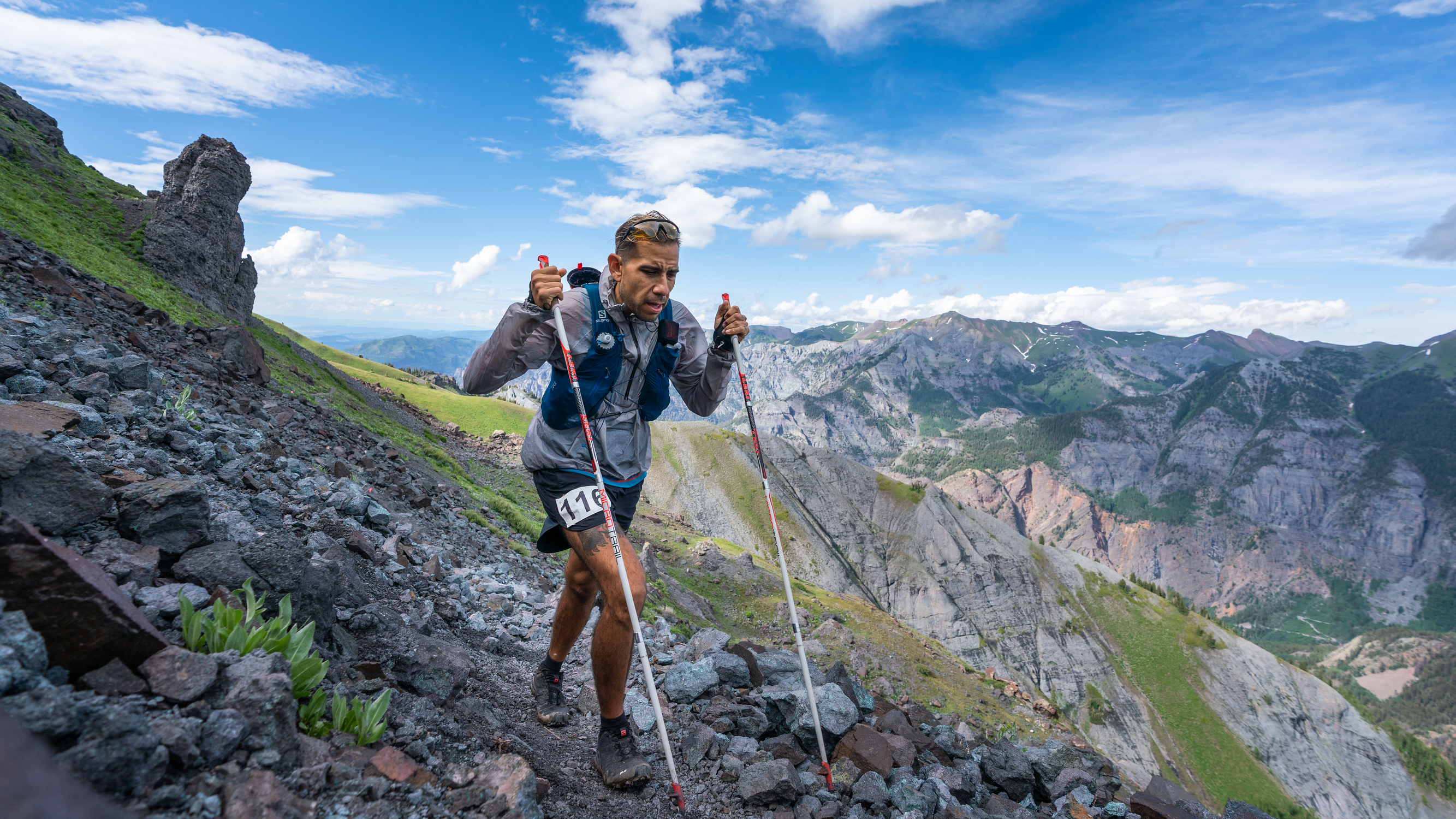 This weekend, renowned painter, muralist, and ultrarunner Yatika Starr Fields (Osage, Cherokee, and Muskogee Creek) is running in the Western States Endurance Run. The 100-mile race, which will begin at 5 a.m. on Saturday, June 25, takes place on the Western States Trail through the Sierra Nevada Mountains in California. This popular trail runs along with the homelands of the Southeastern Pomo, Ohlone, Washoe, and the Nisenan. These elaborate trails were once used for trade with nearby Native peoples, including the Miwok, the Maidu, and the Patwin.

Runners have 30 hours to complete the 100-mile journey from Olympic Valley to the small town of Auburn. The course includes 18,000 feet of elevation gain and 23,000 feet of descent. Most of the runners are trying to complete the race in 24 hours to earn the prized silver belt buckle.

An ultramarathon is defined as anything longer than the standard 26.2-mile marathon. Running those distances might have  some positive effects on health,but there are numerous  obstacles, especially environmental dangers. Last year, 21 runners died during an ultramarathon in China after freezing rain and strong winds. That tragedy led to China suspending ultramarathons.

Ultramarathon runners must be mentally tough. Health research suggests long-distance running is one of the most stressful activities for the human body. Ultrarunning causes high levels of the stress hormone cortisol. The long-term effects of its physical and psychological stress are unknown.

Ultramarathons require constant fueling through hydration and calories. During the Western States Endurance Run, temperatures are expected to be near 100°F. In such conditions, runners can lose three to four pints of fluid per hour. If they only replenish water and not sodium, they’re risking hyponatremia. This is a condition in which someone consumes too much fluid and throws off the body’s sodium balance, which in extreme cases can cause  seizures or death.

Sleep deprivation can lead to cognitive performance deficits and hallucinations during the marathon. The hallucinations generally occur at night, when runners’ headlamps are the primary source of light on the trails. Many ultramarathoners struggle with stress on the central nervous system, involving some sleepless nights following such enormous physical efforts.

Gastrointestinal problems are also common. Ultramarathons generally require runners to eat real food during the race, with soup, quesadillas, sandwiches, chips, pickles, bananas, candy, and pretzels all popular. Unfortunately, the constant bouncing up and down of the stomach increases the likelihood of vomiting and/or diarrhea. To help remedy stomach issues, many runners rely on concentrated sports drinks and energy gels. Yatika will depend on these gels throughout the race, consuming about 300 calories per hour.

GU Energy Labs, a California-based manufacturer of energy gels, is an official sponsor of the race and is also sponsoring Yatika’s individual entry.

Yatika’s long-distance running started with just doing one mile on the treadmill. He has since completed 30 ultramarathons, including a 100-mile race in Colorado and a 91-mile course in the French Alps. He has been training for this race for six months, working with coach Patrick Reagan, incorporating strength-training regimens, weight-vest training, hamstring-strength workouts, heat training in the sauna, and treadmill-incline workouts.

“This race is very demanding in that it takes strength in the canyons from miles 30-60, with temperatures usually reaching around 105 degrees Fahrenheit,” Yatika told Native News Online. “There are over 18,000 feet of climbing, with a descent of 23,000 feet. The race is demanding with heat and steady fueling for all aspects of your body’s conditioning.”

He plans to be very conservative for the first 30 miles, to help him finish in less than 24 hours. “I’ve broken down the course into parts,” he says. There are aid stations dotting the course, he adds, with crews and volunteers offering relief in the forms of help, water and ice, and more.

Prayer is also a part of it.. “Movement through running to me is a reminder of who we are and our true inherent spirits. I grew up attending our Osage dances and ceremonies in Oklahoma at an early age, where I feel that’s where the first connections of prayer and movement came to be present,” he says. “There’s a similar dynamic in running for me that ties and intersects with that of prayer in the ceremony. It is a form of ceremony for me.”

Yatika found running later in life, and says it has enabled him to live a healthier life and given him time to reflect. “I think of a lot when running these longer distances,” he says. “It helps break up time over 30 hours, in a race and also keeps your mind, body, and spirit engaged with something deep and personal. I pray for the many that can’t. I pray for the well-being of my family and friends, along with the communities I am culturally a part of.

“I think about the ones that have passed on that got me here. I know I won’t be able to run and have these opportunities like this forever, and take the moment to appreciate it, yet pay my respect and homage. It’s a prayer and celebration, it’s sadness and rejoicing, it’s sunrise and sunset with the sound of the wind. These are all the things that appear and come about in the 100-mile distance.”

Yatika will have two Native pacers running alongside him during specific sections of the race: Craig Curly (Navajo), a professional runner for the Mizuno sports-equipment company, and ultrarunner Dr. Lydia Jennings (Huichol and Pascua Yaqui), who was featured in Patagonia’s film Run to be Visible.

Yatika is running in partnership with the advocacy group Rising Hearts in support of its Running on Native Lands Initiative. This initiative works to make land acknowledgments a standard practice at race events, and encourages partners to give back to those communities from which the land is borrowed. The Western States Endurance Run will offer a land acknowledgment for the first time at this year’s race. 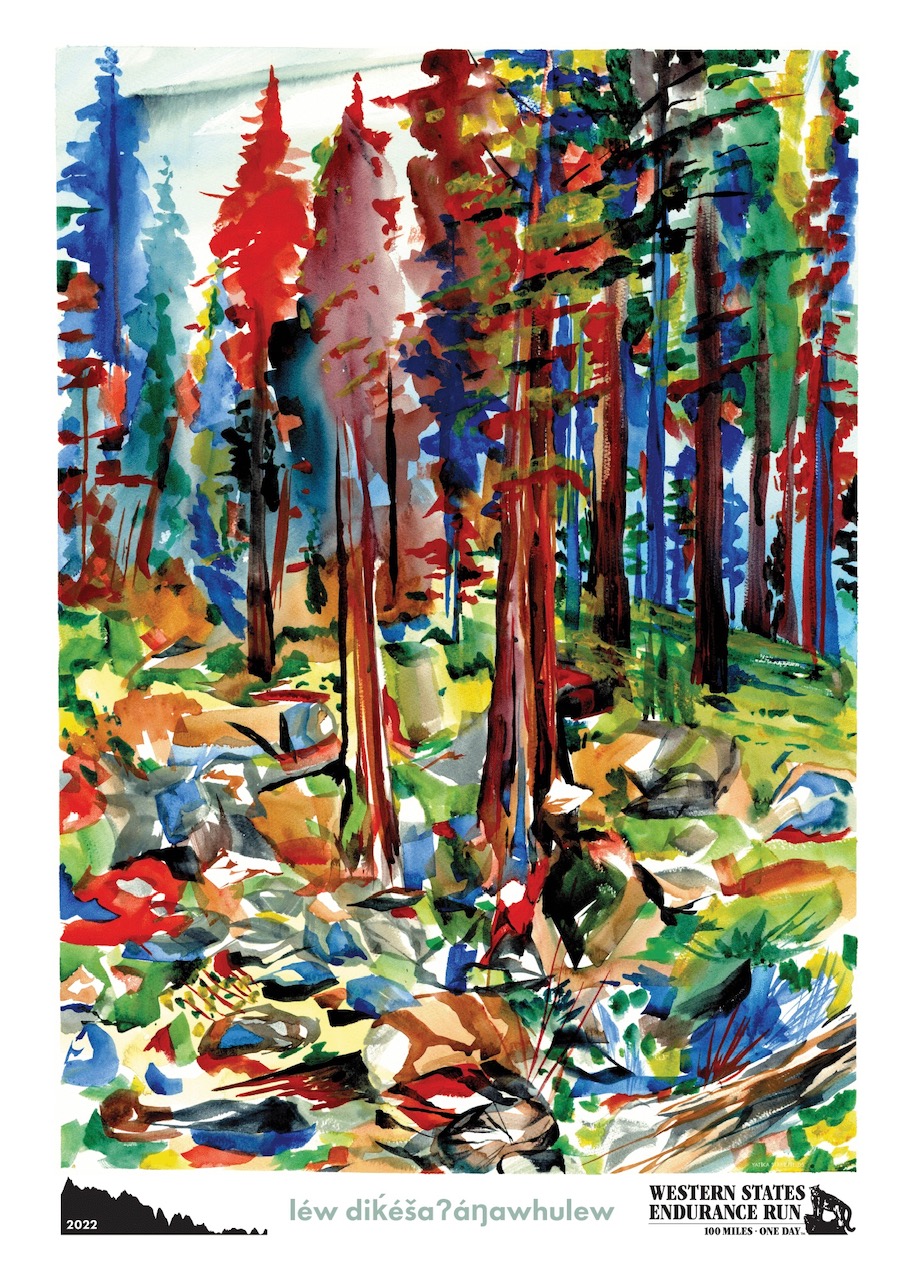 Herman Filmore (Washoe), culture and language resources director for the tribe, will deliver the land acknowledgment.

“We feel it is very important to have this land acknowledgment take place. We see this as a first step in what we hope is an ongoing and developing relationship with local Indigenous groups who inhabited for thousands of years Olympic Valley and the rest of the land where the Western States trail traverses,” said Diana Fitzpatrick, president of the Western States Endurance Run’s board of directors said. “We want to honor and respect their role as the original stewards of the land and their continuing presence and importance today. This is an educational and important moment for us all, and we feel extremely honored to have Herman share his words with us.”

Yatika also created the first poster for the Western States Endurance Run, inspired by the lands along the course. Proceeds from its sales will go back to the Washoe community and to the Western States Trail Foundation for Environmental Stewardship.

You can follow Yatika’s progress over the weekend (Bib 78) on ultralive.net and watch the race day live cast on YouTube.