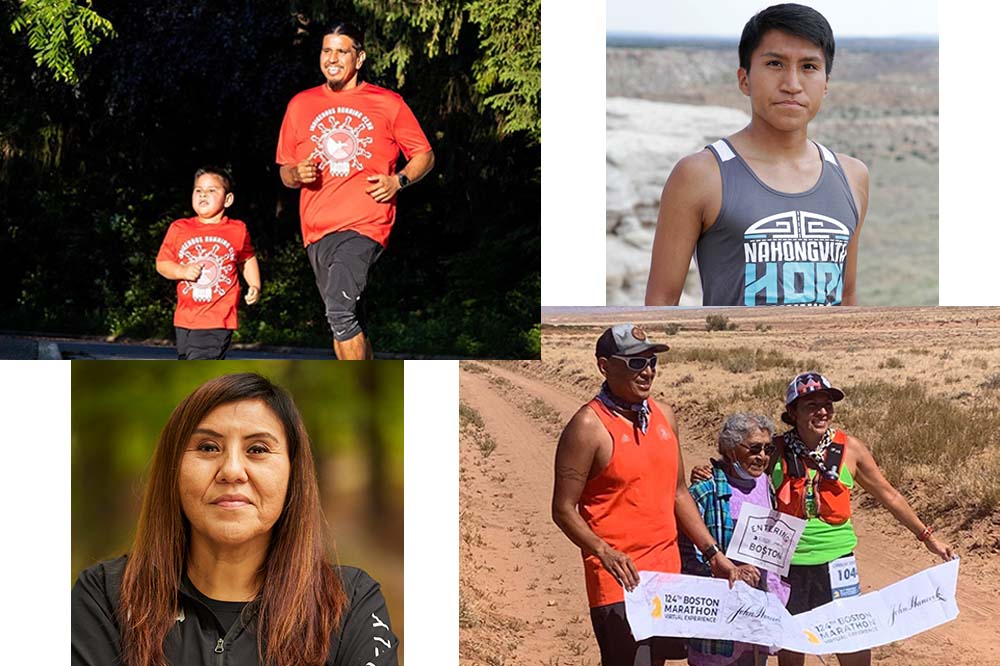 After two turbulent years, the 126th Boston Marathon returns to its traditional start on the third Monday in April, and Native runners from across Indian Country will be competing.

Much of the early history of the Boston Marathon has strong ties to Indian Country. Native runners would take on the Boston Marathon with aspirations of getting into the Olympic marathon. Many Native runners have had success at the race, with five Native runners medaling in the marathon’s history: Bill Davis (Mohawk), Tom Longboat (Onondaga), Andrew Sockalexis (Penobscot), Ellison Brown (Narragansett), and Patti Lyons Catalano (Micmac). Iconic Native performances at the Boston Marathon have shaped race: Perhaps the most iconic – and challenging – section of the course, “Heartbreak Hill,” is named after Narragansett tribal member Ellison “Tarzan” Brown’s legendary victory in 1936. It was here Brown, condescendingly challenged by local favorite John Kelley, passed the Irish American to win the race–thus “Breaking Kelley's heart” at this section of the race.

Monday's marathon course traverses the homelands of the Mashpee Wampanoag, the Massachusett, and the Pawtucket people, beginning in what is now Hopkinton, Mass. and finishing on Boylston Street in Boston. Marathoners run east towards the sunrise – a morning tradition for the Navajo and other Indigenous peoples. In a region of the country that has long heralded the colonial, settler history, last year’s race was held on Indigenous Peoples’ Day. After many called for the marathon to be rescheduled, the Boston Athletic Association’s (B.A.A.) chairman apologized and began the marathon by reading a land acknowledgment statement. In addition, the B.A.A. featured a mural at Copley Square Park that highlighted previous Indigenous runners – completed by artists Yatika Star Fields (Osage, Cherokee and Muskogee Creek) and Robert Peters (Mashpee Wampanoag).

Citizens representing 122 countries are in the field of runners. Among those from around the globe include Native runners representing various Tribal Nations from across North America. These runners carry on a rich tradition of long-distance running in the Native community.

Native News Online caught up with a few of these runners to celebrate their stories. 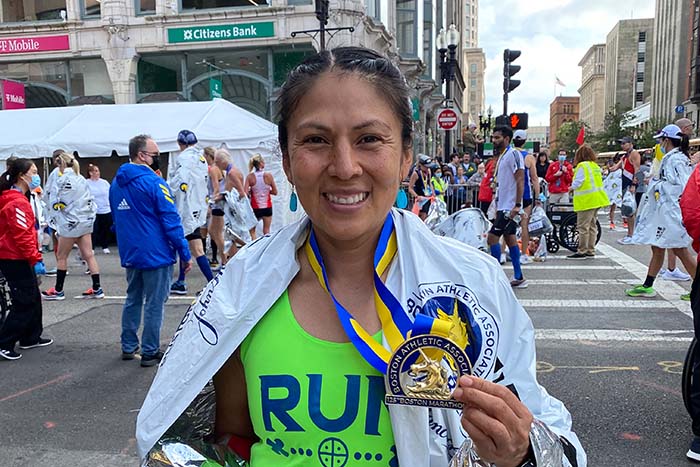 Caroline Sekaquaptewa, Hopi – TEMPE, Arizona. Caroline grew up running the high-country desert trails that weave the Hopi mesas. On the Hopi reservation, running is part of the culture. “I am proud to be a Hopi woman and I feel I carry the strength of Hopi through running. I have been taught from a young age that running is prayer,” Caroline explained.  “We pray as we run, and that belief has been part of Hopi runners for centuries.” The Boston Marathon represents a goal she once thought impossible to reach. Now, Caroline is running her ninth Boston Marathon. She was recently featured in a Brooks Running commercial with a two-time Olympian and winner of the 2018 Boston Marathon, Des Linden. “As a mom, grandma, teacher, Hopi woman, there are many roles and responsibilities that I juggle during training,” Caroline said. “Boston symbolizes, ‘Yes, you can do hard things!’” In addition to qualifying for her ninth Boston Marathon, Caroline is raising funds for Hopi Relief. This non-profit has provided food, supplies, and other resources for Hopi communities during the pandemic and continues today. “This part of Boston is very meaningful to me and my family, to be able to help others in any way we can.” 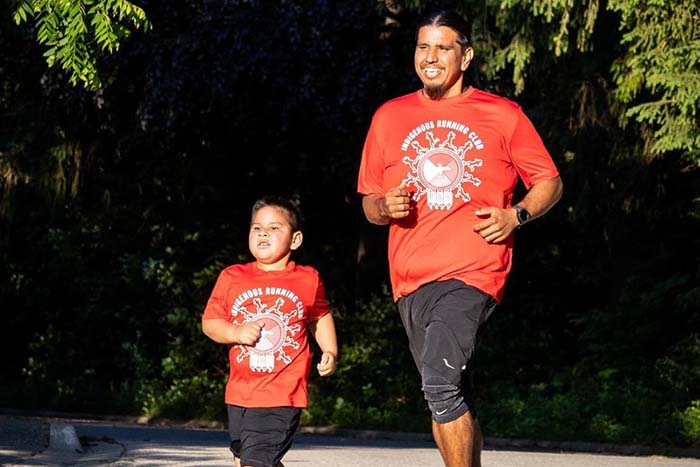 Joel Kennedy, Oneida Nation – LONDON, Alberta. Joel’s running journey began in 2016 to improve his health. At the start of his journey, Joel couldn’t walk for more than 10 minutes. He is now a marathoner, an ultramarathoner, and approximately 150lbs lighter. Wanting to bring together a community of runners, he started the Indigenous Running Club. Running has served as a conduit for Joel to grow as an Indigenous person. As part of the Oneida Nation and Bear Clan, Joel has learned about mental, emotional, and spiritual connections with himself and everything around him, all of creation. “Living in the city, there are times where it's hard to find places to ground yourself to the land, but running has connected me more than I could have imagined,” Joel said. Joel is a charity runner raising funds for Peer Health Exchange. 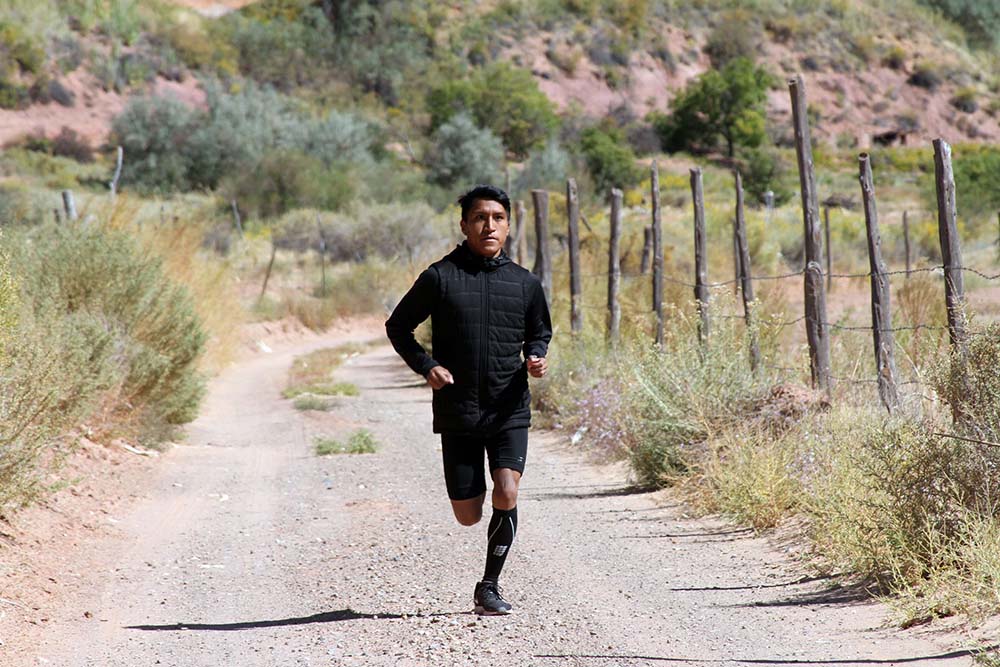 Kyle Sumatzkuku, Hopi – TUBA CITY, Arizona. Known as Running Fox in his community, Kyle grew up running and training in the altitude of Arizona. In Hopi culture, running is necessary for the Hopi way of life. Today, Kyle is one of the fastest Native runners in the country. He placed a remarkable 48th overall at Boston last year. Running provides Kyle with a vehicle for daily prayer and healing. “I run for my ancestors. I run to honor their hopes and prayers. I run on behalf of all Indigenous ancestors and people across the globe. I run for the positive aspiration our ancestors desired for us all,” Kyle explained. “They would have wanted us all to continue down a path of protecting the earth. Protecting the environment. Protecting sacred sites. Protecting our Indigenous cultures and our tribal communities.” Kyle feels the blessings in Boston and shares those blessings in prayer with family, friends, and relatives back home on Hopi. “I pray for our people. I pray for all the runners. I pray for all those who are not able to run and for those who might be suffering from ailments. I consider all living beings in my prayers when I run. That is the Hopi way of being.” 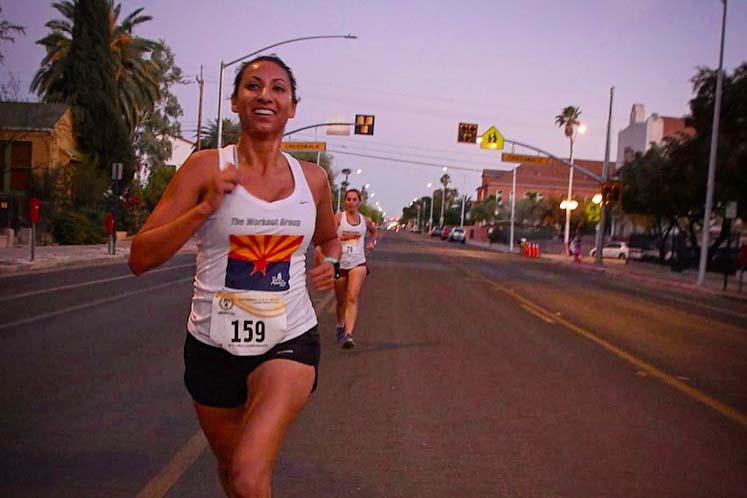 Lydia Jennings, Ph.D., Huichol (Wixaritari) and Pascua Yaqui (Yoeme) Nations – TUCSON, Arizona. As a soil scientist, Dr. Jennings studies the destructive outcomes mining has had on Indigenous peoples in the US. After completing her doctorate in soil microbiology, her doctoral graduation was canceled in 2020 because of the pandemic. Dr. Jennings decided to celebrate her milestone by dedicating a 50-mile run along the Arizona Trail to 50 Indigenous scientists. This event was documented in Patagonia’s Film, “Run to be Visible.” Running provides her unique insight into her community, her ancestors and exposes her to landscapes affected by mining. “This sport has helped me understand my environment, and in turn, my studies have helped me decode the stories of the lands I run,” Dr. Jennings explains. Dr. Jennings is running the Boston Marathon for the Wings of America program. In tandem with B.A.A. and Harvard’s Native American Program, the Wings of America’s “Pursuit” Program brings several Indigenous students to run the Boston Marathon. 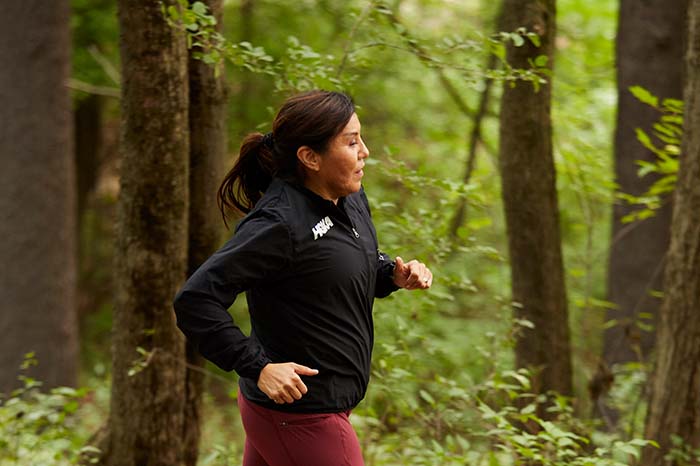 Verna Volker, Navajo Nation – MINNEAPOLIS, Minnesota. Verna began running in 2009 to improve her health. Being a Navajo woman has shaped her running career in various ways. “Growing up, I remember hearing one of the teachings of the Navajos,” Verna explained. “One would rise early at dawn to run, you run towards the east to greet the Creator and say your prayers for harmony in your life. I never really understood that teaching until I became a runner.” In 2018, Verna created an online community, Native Women Running, to magnify the visibility of Native runners and to serve as a place for inspiration and positivity. As part of the 50th anniversary of women being allowed entry to the race, Verna was selected to be one of eight women appointed to the “Boston Marathon Honorary Team.” As the lone Native representative, it means that much more. Verna is running on behalf of Wings of America, a native youth organization that empowers native youth and the community through running. On a personal level, she is running this race for the agonizing Missing and Murdered Indigenous Women and Girls emergency. These runners are often recognizable by the haunting red hand-painted across their mouths, and evince solidarity for women and girls silenced by abduction or death. Verna is dedicating this year’s races to her mother, who passed away on November 22, 2021. “Running has been my healing as someone who has lost her parents and three siblings,” Verna said.