FARGO, N.D. — Minutes after a jury returned a partial guilty verdict for an incident that happened two years ago on the Turtle Mountain Indian Reservation in north central North Dakota, the convicted man died by apparent suicide on Monday, May 17. The jury had just been escorted out of the courtroom. 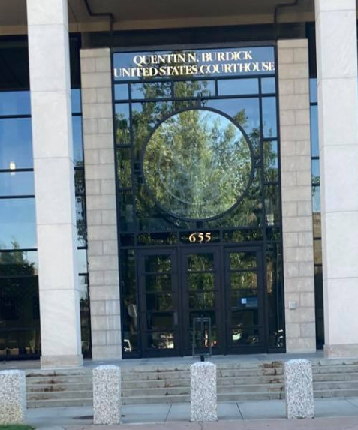 Jeffrey Sahl Ferris, 54, of Belcourt, N.D., was not identified initially, but his case was the only one scheduled in the Quentin N. Burdick U.S. Courthouse in Fargo.

According to the United States Marshals Service, Ferris slit his throat with an object that appeared to be a pen or a plastic shank. Sources speaking to Native News Online on condition on anonymity confirmed that Ferris grabbed an envelope opener after U.S. District Judge Peter Welte denied Ferris’s request to be released for 24 hours before returning to jail.

Ferris was initially charged with terrorizing in the Rolette County District Court in May 2020 for the 2019 incident, but his case was dismissed. He was then later charged faced federal charges for which he was convicted by the jury today.

Judge Welte presided over Ferris’ trial, in which Ferris was found guilty of the use of a firearm in the presence of a minor.

The incident that led to Ferris being charged began with him chasing several youth near an abandoned house in the proximity of his home. He chased them away with his vehicle at high rates of speed, all while in possession of a 9mm handgun.

While Ferris pursued the youth, one minor crashed on a dirt bike. Ferris got out of his vehicle, pointed his firearm at the youth while the youth was still on the ground and threatened to kill if the youth ever came near the location again.

Ferris was a former emergency medical technician (EMT) for the Belcourt community of Turtle Mountain. He was not an enrolled member of the Turtle Mountain Band of Chippewa Indians, but was a descendant.

According to several people familiar with the case, Ferris was facing a minimum of seven years for the use of a firearm in the presence of a minor. All of the victims of the case are minors and their identities are protected by law.

More information on the incident will become available on Tuesday, May 18.

--
EDITOR’S NOTE: This story has been updated from an earlier version.