Tributes for long-term Rep. Don Young (R-AK), who served as Alaska’s congressman for almost 50 years came in over the weekend. Rep. Young, 88, passed away on Friday with his wife Anne at his side. 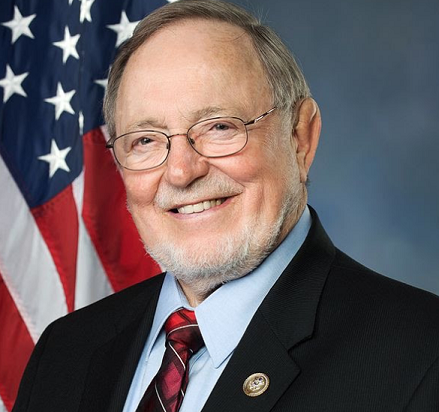 Tribues for Congressman Don Young, the longest-serving Republican in House history and a longtime supporter of Native rights, came in over the weekend. His long tenure representing the only Alaska congressional seat that spanned from 1973 until death. He was the dean of the House of Represenatives at the time of his death.

“I knew Don Young for a long time. He always stayed true to who he was and the people of Alaska he represented. Tough. Loyal. A consensus builder.

He was larger than life, but always focused on Alaskans’ everyday lives. As Dean of the House, he was the longest-serving House Republican in history—but cherished photos of his legislation being signed into law by ten presidents, Republicans and Democrats.

There is no doubt that few legislators have left a greater mark on their state. Don’s legacy lives on in the infrastructure projects he delighted in steering across Alaska. In the opportunities he advanced for his constituents. In the enhanced protections for Native tribes he championed. His legacy will continue in the America he loved.

Jill and I send our prayers to his wife Anne, to his daughters and the entire Young family, and to the people of Alaska.

“I am terribly sad to hear of my dear friend Congressman Don Young’s passing.

Early on as a freshman in the House, Mr. Young showed up to my office to introduce himself as the Ranking Member on the subcommittee I was set to chair. He eventually became one of my most valued friends and mentors.

His staff was equally as kind and helpful to my staff and we eventually worked on many good things together for our country. I credit him with helping me get legislation passed, for supporting me through my confirmation, and for showing me what public service really meant.

As Dean of the House, Mr. Young taught all of us how to love the people and the states that we represent. Everything he did, every day, was for Alaska and its people, whom he loved dearly. He leaves us a tremendous legacy of bipartisanship in service of the greater good.

I will miss him immensely. His leadership and guidance will be with me always. I keep his wife Anne in my heart, as well as his family, friends, and colleagues.”

Statement by Rep. Tom Cole (R-OK), who is a Chickasaw Nation tribal citizen

“It was with great sorrow and sadness that I learned of the passing of the ‘Dean of the House,’ Representative Don Young of Alaska.

Like every other Member of Congress in both chambers, I have spent my entire career in the House serving with Don Young. To me, Don Young was no casual acquaintance or passing colleague. He was a mentor, a friend and, in many ways, a role model.

Don Young loved the House. Even though he was a statewide elected official, he never aspired to serve in any other office. In 2004, I recall visiting his office to discuss a road project in my district. At the time, Oklahoma had an open Senate seat. Before we got down to business, Don said, ‘Tom you’re not here to tell me you are running for the Senate, are you?’ I said ‘no.’ He immediately declared, ‘Good! We have sent a lot of good people from the House to the Senate in my time. Unfortunately, they all turned into Senators!’

Don’s first wife was a Native Alaskan. No one in the House did more to advance the cause of Indigenous peoples than Don. He was knowledgeable about their issues and sympathetic to their cause. He was a fierce defender of tribal sovereignty, treaty rights and the federal trust responsibility.

As the representative of one of America’s greatest energy states and its last frontier, Don mirrored the views of most Oklahomans on oil and gas and infrastructure. For that reason, we often found ourselves as natural allies on these critical issues.

Don was a natural ‘insider’ when it came to legislating. He knew how to horse trade and get things done for his state. Frankly, we often did business over a stiff drink and a good cigar. He was a frequent visitor to both my personal and Capitol office because he knew he was always free to smoke a good cigar. If you made a deal with Don Young, you could take it to the bank. And if you were in a legislative bar fight together, you knew he had your back and would stay with you until the last punch was thrown.

Don was the current Dean of the House and the longest serving Republican in the history of Congress. He was a giant legislatively and an imposing physical presence in the halls of Congress. Everyone knew his favorite seat on the floor of the House and no one dared to sit in it other than an ignorant freshman — and that person only did it once.

But beneath the bluster, the bravado and the swagger, Don Young was a kind and decent man, a wise and thoughtful counselor to all who would listen and a firm friend to anyone who made the effort to get to know him. He could be intimidating when he wanted to be. But his bark was always worse than his bite.

I will miss Don Young in many ways — as a legislative ally, a congressional institutionalist, a source of wisdom and history and a master strategist. But mostly, I will miss him as a friend. We will not see his like again in the House.

I extend my deepest sympathy to Don’s beloved wife Ann, his family, friends, loved ones and the people of Alaska. We have all lost a man who will never be forgotten and cannot be replaced.”

“I was greatly saddened to learn of the passing of the Dean of the House, Congressional Native American Caucus Vice Chair, and U.S. Representative from Alaska Don Young. Representative Young was a force in the Halls of Congress and never hid his love for the House, the people of Alaska, or his country. He wasn’t afraid to speak his mind and worked hard to bring people to the table.

As a leader on the House Natural Resources Committee, House Committee on Transportation and Infrastructure, and the Congressional Native American Caucus, Representative Young advocated for the people of Alaska and worked relentlessly to honor the federal trust responsibility to American Indians and Alaska Natives. In our work together with the Native American Caucus, I saw his dedication and advocacy on advance appropriations for Indian programs and addressing the impacts of boarding schools.

Don Young was a true public servant that worked to better the lives of Alaskans and listened to and amplified the voices of Tribal Nations. As Co-Chair of the Congressional Native American Caucus, I am grateful for his service. We honor his legacy and keep his wife Anne, his family, staff, and the people of Alaska in our hearts.”