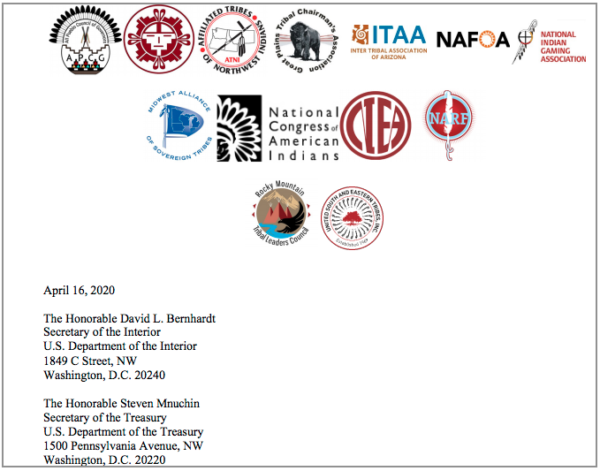 WASHINGTON — Tribal leaders and Indian Country advocates are calling on federal agencies to ensure that an $8 billion Coronavirus Relief Fund (CRF) is paid only to Tribal governments and not for-profit corporations. They’re also demanding that Assistant Secretary for Indian Affairs Tara Sweeney recuse herself from the process.

In an extraordinary letter signed by every major Inter-tribal organization in the lower 48 states, more than a dozen national and regional tribal organizations urge the U.S. Department of Treasury to disburse CRF funds “directly and exclusively” to Tribal governments. The letter urges the Treasury not to disburse CRF funds to regional or village Alaska Native Corporations (ANCs), which are owned by shareholders.

Collectively, the 13 organizations represent almost every federally recognized tribe in the lower portion of the United States. The letter in itself is historic in that the 13 organizations have never sent a joint letter to voice collective concerns on any issue impacting Indian Country.

At issue is the Coronavirus Aid, Relief, and Economic Security (CARES) Act provision that designated $8 billion to American Indians tribes to respond to the COVID-19 pandemic and continue to provide essential government services.

Earlier this week, the Treasury decided, after consulting with the Department of Interior, that shareholder-owned ANCs would be eligible to apply for some of the billions earmarked for tribes in the CARES Act.  The decision was denounced by tribal leaders, who claimed Congress intended the funds to go to federally recognized tribes, including Alaska Native tribes, rather than for-profit corporations.

In yesterday’s letter, which is addressed to Interior Secretary David L. Bernhardt and Treasury Secretary Steven Mnuchin, the 13 inter-tribal organizations write:  “The undersigned organizations feel obligated to communicate to Secretary Mnuchin the gravity of this decision. This is not a one-off decision that the Treasury can make with minimal unintended consequences.”

The letter explains that recognizing ANC boards of directors as similar to tribal governing bodies “completely misrepresents the breadth and meaning of tribal governance. This is categorically incorrect and diminishes the stature of federally recognized tribal governments and our sacred government-to-government, nation-to-nation, sovereign-to-sovereign relationship.”

The letter also accuses the DOI of failing to protect tribal interests and failing to properly communicate the legal nuances and issues to the Treasury.

“It is regrettable that Treasury is in this tenuous situation, but we must implore you to make the right decision, and not to make a decision that could alter or undermine the relationship the United States has with tribal governments,” the letter said.

The letter also demands that Sweeney recuse herself from “all actions and decision-making related to ANCs, including the CARES Act funds.”

Sweeney, an Alaska Native and former executive at the state’s largest ANC, has come under fire this week after some tribal leaders accused her of diverting emergency Tribal Government resources to state-chartered, for-profit corporations owned by Alaska Native shareholders, including Sweeney and her family.

A spokesperson for the DOI denied the allegations, calling them “completely false.”