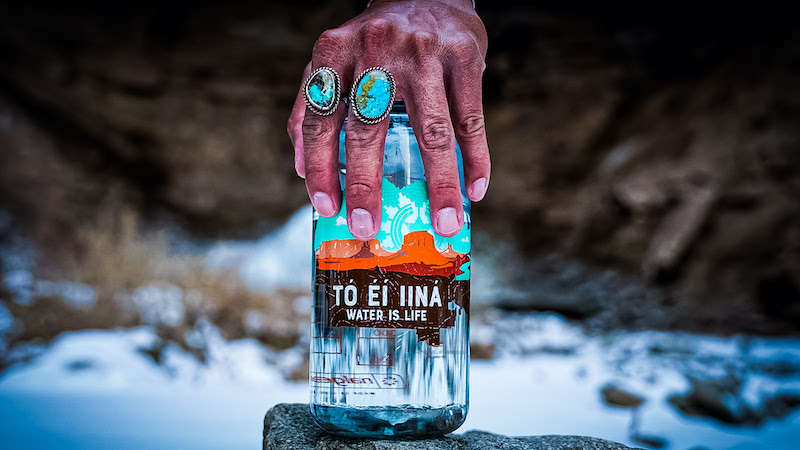 Over the course of the last few years, members of the Navajo Nation have taken it upon themselves to intervene where infrastructure has waned on the Rez, particularly when it comes to water.

In an effort to raise funds for the Navajo Water Project, which brings running water to homes without access to water or sewer lines, Diné artist Jaden Redhair and the Nalgene Water Fund (NWF) created the “Tó éí iiná” (Water is Life) water bottle.

Redhair’s distinguishable design incorporated elements of Navajo basketry, Monument Valley landscape and an outline of tribal territory. With each sale, NWF donates $5 to combat the water crisis on the Navajo Nation reservation, which spans 27,000 square miles over three Southwestern states. Launched in late November 2020, the “Tó éí iiná” bottle raised over $12,000 in the first month of sales alone and has been a best-seller ever since.

Navajo Nation, which is home to nearly 250,000 Navajo citizens, was hit particularly hard during the Covid-19 pandemic and is still working its way towards recovery. More than 30 percent of Navajo families had to find alternatives to bring clean water to their homes.

“Some people have to drive 30 minutes to an hour and a half just to get water, but for me when I was younger, it was just something that we do. It wasn’t until I got a little older that I was like, ‘Hey, people don’t need to be doing that,’” Redhair said. 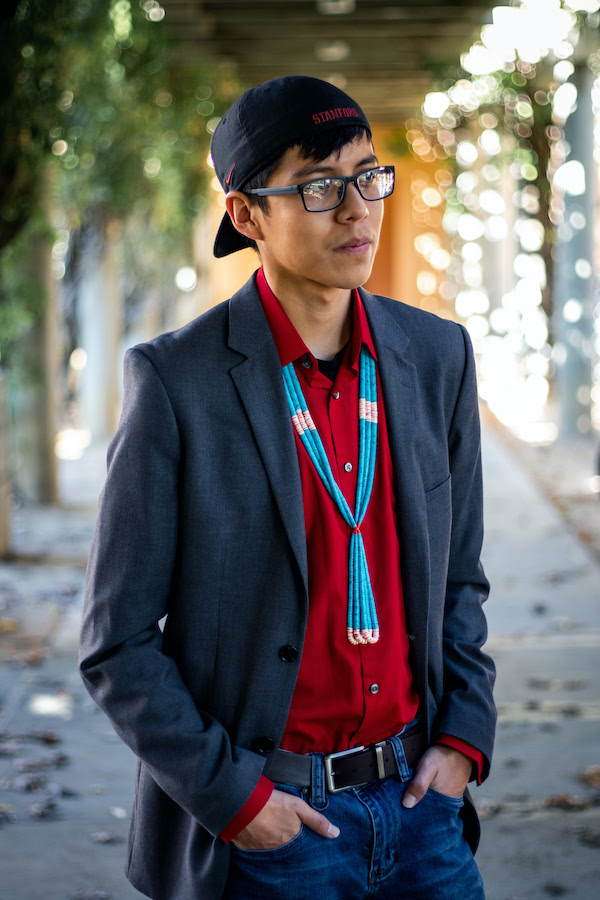 Jaden Redhair, 21-yr-old Diné artist and engineering student. (Photo/Courtesy of Nalgene)Having grown up on the reservation, Redhair understands the problems his tribe faces each day and wants to make a difference. His father taught him graphic design during high school and has worked on public health advocacy by designing posters with tips and recipes for creating healthy habits. Inspired by Marvel’s “Iron Man,” Redhair found a new affinity for engineering and is combining his love of art and science to make impactful change. The 21-year-old Stanford University student is working to obtain a degree in electrical engineering and eventually plans to apply that knowledge to strengthen his reservation’s infrastructure.

“After college (I’m not) wondering where my major is going to take me, it’s more so of a problem of what am I going to start with?” Redhair said.

The water accessibility problem isn’t only limited to reservations and requires more wide-scale action by other governing bodies as the American Society on Civil Engineers (ASCE) recently found.

ASCE’s 2021 Infrastructure Report Card gave the country an overall C-minus grade and called attention to specific categories, such as drinking water. Every day, the US loses an estimated 6 billion gallons of treated water — the equivalent of or 9,000 swimming pools worth — due to breaking water mains. Reviewing decades’ worth of data, the report found a significant decline in the federal government’s spending in the water sector. Since the 1980s, around two-thirds of public spending for capital investment in water infrastructure was made by local and state governments. Another analysis estimated the funding needs for drinking water infrastructure in New Mexico to be $1.4 billion and $9.1 billion in Arizona, both states with a large number of reservations.

Another concern is the need for more water sector workers as the next five years projects approximately 11 percent of these workers will retire or transfer within each year. Communities with more than 3,300 residents are expected to have emergency response plans and many need to be updated. Through America’s Water Infrastructure Act of 2018, federal and local governments have opportunities to create a sustainable water sector workforce. The report provides recommended solutions that could greatly benefit lower-income and vulnerable communities by increasing recruitment support, conducting revenue forecasting models and investing in affordable programs, to name a few.

Some brands such as Nalgene, which utilizes reusable plastic products and healthy community initiatives, have taken on partial responsibility to provide various resource support.

“People really take clean water for granted. I just assumed there weren’t water issues here (in the US),” admitted Nalgene’s marketing director Eric Hansen, who assumed water accessibility was only an international concern. “Then we realized we can do something domestically.”

In 2019, the company created NWF to partner with grassroots nonprofits to raise funds and build awareness for US communities with limited access to clean water. Last fall, NWF recognized the needs of two distinct areas of the country and contributed funds to community-led programs in FIint, Mich. (The Flint Community Lab) and Navajo Nation (Navajo Water Project). These long-term projects are meant to build relationships, provide resources and empower community members to find solutions to water access issues.

NWF’s goal is to build this network of community collaboration by adding a new partner each year, Hansen said.

“We’ll continue to explore which communities will most benefit and work with people within the communities. There’s a broader and better connection point. This model supercharges the (partnership) model,” Hansen claimed.

“Nowadays it seems a lot easier for people to be fluid in the job market and work in different sectors. I think it should be encouraged to keep moving, keep growing in (infrastructure) jobs. The more we get comfortable being able to move from place to place will definitely help the Navajo Nation a lot in terms of getting more people to combat issues and get fresh eyes on things,” Redhair claimed.

If you'd like to support the Nalgene Water Fund and purchase the “Tó éí iiná” bottle,  you can find it here.