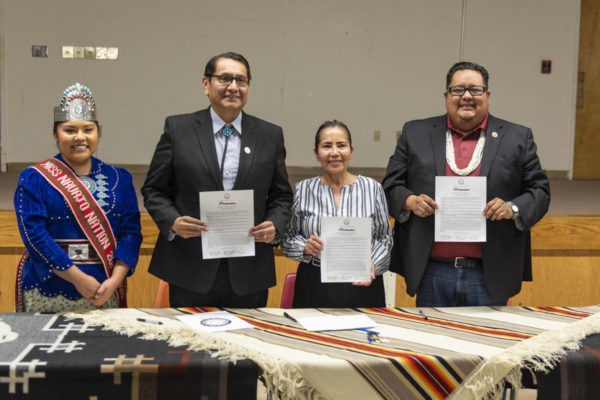 The unique partnership is important to counter the lack of enthusiasm American Indians and Alaska Natives have historically displayed in disclosing information to the federal government. During the 2010 Census, the Native population was undercounted by almost five percent, according to estimates. The undercount numbers in Alaska were worse.

“NCAI is proud to partner with two of the largest Native-focused organizations in the U.S. to combine and leverage resources, reach, and relationships so that we can combat another undercount,” CEO Kevin Allis said. “This partnership with NUIFC and NARF demonstrates strength in Indian Country and we are hopeful that our strategic and concerted efforts will result in an accurate count of Native people.”

“This partnership is historic and represents the first time that both our reservation and urban based Native community tribes and organizations will be resourced to do this critically important work,” said Janeen Comenote (Quinault), executive director of the NUIFC.

Added John Echohawk, executive director of NARF, “A complete count of all Native peoples is paramount to protecting their civil rights for the next decade. An accurate Census count is essential to securing fair representation and critical resources for Tribes and Native communities. We stand united with our partners at NCAI and NUIFC in working together to ensure Native people and Indian Country count in 2020.”

On top of resistance by the Native population to disclose numbers to the federal government, there are several other factors that contribute to the Census undercount. They include: a high percentage of young children, geographic isolation, language barriers, unequal educational opportunities, poverty, high rates of homelessness and housing instability, and non-traditional mailing addresses that exclude them from Census mailings.

The Census has committed efforts and resources to online programing and employment. This is a major problem for many Indian communities, due to the pronounced digital divide in Indian Country created by a lack of broadband access. This places completion of the 2020 Census online beyond the reach of many Native people.

Jointly, the three organizations feel the consequences of the 2010 the undercount manifested itself in the form of unjust policies based on flawed data, a shortfall of resources, and a lack of representation in the decision-making process.

Another undercount in this year’s Census will be devastating for Native people, which is why these three national organizations are standing together to guarantee that Indian Country is counted accurately in all 50 states both on and off the reservation.

As  Census 2020 unfolds, this coalition will provide informational materials, technical assistance, resources to Indian reservation and urban communities, and a coordinated digital message to enhance the AI/AN Census efforts.