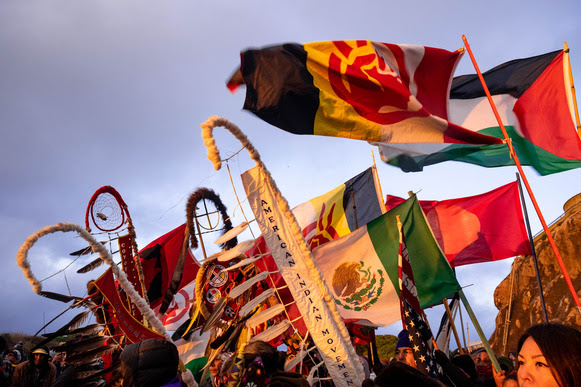 The IITC said in a statement released on Monday:

“IITC condemns the recent threat of forced displacement of Palestinian residents of the Sheikh Jarah neighborhood and the violent raid by Israeli security forces on the Al Aqsa Mosque in occupied East Jerusalem are the most recent examples, sparking the current wave of violence including an unprecedented level of Israeli aerial, naval and ground attacks on Gaza, claiming the lives of at least 192 Palestinians, including 58 children. 10 people have been killed in Israel, including two children, by Palestinian armed groups’ missiles launched from Gaza.

IITC has a longstanding history of support for the Palestinian people. We consider the ongoing and current violence occurring in Israel and occupied Palestine to be a direct result of the rights of Palestinians not being respected and protected, in particular their right to self-determination under international law, including the continued proliferation of illegal Israeli settlements in the West Bank,"

IITC calls upon Israel and all States to fully implement their international human rights and humanitarian law obligations, starting with the Universal Declaration of Human Rights’ affirmation that “recognition of the inherent dignity and of the equal and inalienable rights of all members of the human family is the foundation of freedom, justice, and peace in the world”. IITC calls on Israel to respect its obligations under the Geneva Convention including the prohibition against the targeting of civilians, and on the Biden Administration in the United States to take serious measures to hold Israel accountable for its human rights violations. We also call on the U.S. Administration and Congress to support the United Nations resolution for an immediate cease-fire and to suspend sending any military aid or equipment to Israel that is being used to violate the human rights of the Palestinian People, their families, and children.

“As a mother and grandmother, I am horrified to see weapons of war killing innocent children, babies, while those who have the greatest powers in the world watch and do nothing,” IITC Board member Lisa Bellanger, Leech Lake Ojibwe/Dakota, said in the statement.