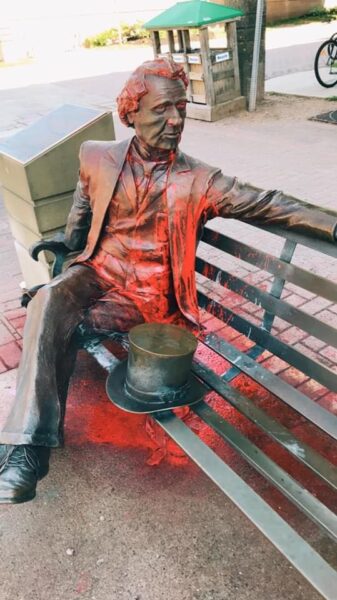 CHARLOTTETOWN, Prince Edward Island — Organizers for a Healing Walk for Justice found out Friday that the statue of John A. MacDonald, Canada’s first Prime Minister, was doused with red paint Thursday night. The statue was on the path of the organized walk, which aimed to bring attention to the recent killing of two Indigenous people by law enforcement in the Canadian Province of Prince Edward Island.

“We just wanted to show our respect and walk in peace for our fallen brothers and sisters,” said Richard Pellissier-Lush, emcee of the Healing Walk for Justice.

But those who came out to show their support heard of the vandalism to the statue of John A. MacDonald prior to walking. 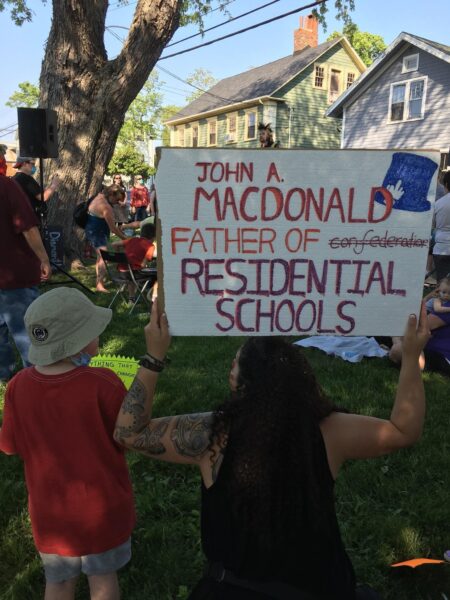 Protestors want statue of John A. MacDonald taken down.

“When I found out the statue was vandalized, I was happy,” said Healing for Justice Walk Organizer and Abegweit First Nation Member Wyonna Bernard. “We have wanted that statue gone as long as it’s been up.”

“He didn’t want one Indian left in Canada, but people celebrate him and it’s a slap in the face, to me,” Bernard said.

"There were rumors in the community saying it was us who did it,” Pellissier-Lush said. “But we had zero involvement.”

“I don’t condone vandalism, but I also don't stand for symbols of racism and hate,” said Organizer and Abegweit First Nation Member Sarah Lynn Bernard. “Our walk today was organized, peaceful, and from speaking with other organizers, we know the vandalism didn’t come from someone participating in our event.”

The Healing Walk for Justice came after a week where two Indigenous people, Chantel Moore and Rodney Levi, were killed by law enforcement in a span of eight days.

Moore, 26, was killed by an Edmundston Police Force officer during a wellness check in the early hours of June 4. Moore was a Tla-o-qui-aht/Nuu-chah-nulth woman from British Columbia. Judith Sayers, President of the Nuu-chah-nulth Tribal Council published a statement that said: “She was well loved by a very large family and many friends. And a nation mourns.

Levi, 48, was shot by a Royal Canadian Mounted Police (RCMP) Officer who was responding to a call for an unwanted person at a local church. The church, Boom Road Pentecostal Church, issued a statement about it Sunday that said Levi attended church, was loved by the congregation and will be missed.

“We recognize this is a deep loss to the Metepenagiag Mi’kmaq First Nation Community,” Boom Road Pentecostal Church said in the statement. “We are praying for his family, his friends, and the Mi’kmaq people.”

In an interview with the Canadian Broadcasting Corporation, Prince Edward Island Premier Dennis King said of the vandalism of the statue, “This is a difficult issue all across the country and all across the world, and I'm certainly interested in having a thorough discussion as to how we can best, as Prince Edward Island, represent the history of who we are, of how we've gotten to where we are, and not trying to sugar-coat and pick just parts of it.”

MacDonald was Canada’s first Prime Minister and is known for introducing the most damaging elements of Canadian Indigenous policy including residential schools that separated children from their families in effort to Christianize them.

One author, James Daschuk, said of MacDonald in his bestselling book Clearing the Plains, “Macdonald basically had Indigenous people locked down so tightly that they became irrelevant after 1885.”

First Nation leaders are calling for an Indigenous-led team to head the investigation into the deaths of Moore and Levi.

Ron Tremblay, Wolastoq Grand Council chief and elder, was heartbroken when he found out Saturday the BEI would be investigating Levi's death.

“We need our own Indigenous council to go investigate these murders because our people need to be a part of this,” Tremblay said to the National Post.