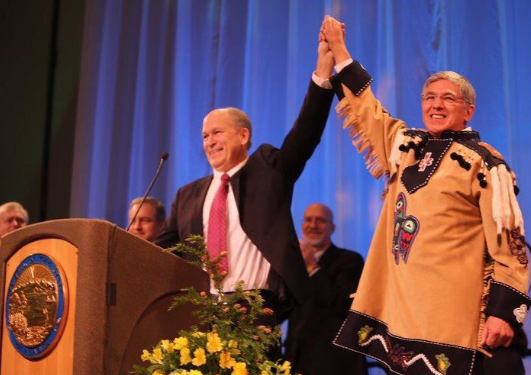 JUNEAU, Alaska — The state of Alaska is mourning the passing of Bryon Mallott, a tribal citizen of the Central Council Tlingit and Haida Indian Tribes of Alaska, who served as the state’s lieutenant governor from 2014 to 2018. Mallott died unexpectedly on Friday after suffering a major heart attack on Thursday. He was 77.

Mallott, a Democrat, served as lieutenant governor, under former Gov. Bill Walker, who was an Independent.

“Today I lost a dear friend, Byron Mallott, whose love for Alaska and Alaskans knew no bounds. We started out as rivals and soon became close friends. I will miss him greatly,” Walker posted on his Twitter account.

Highly regarded among Native Alaskans, Mallott served in many political and business positions during a career that spanned several decades.

“I am honored to have known him as a great friend who gave us hope in charting our futures. He continued to accept invitations to our Alaska Tribal Leader Summits for years. He came and spoke from his heart. May he Rest in Peace. We will miss him, but his words will live forever,” said Mike Williams, chief of the Yupiit Nation in Akiak, Alaska.

“Byron Mallott was a highly impactful Native leader in Alaska. Strong, methodical, a beautiful orator who would never be rushed. He knew his people and he represented Alaska Natives and Alaskans very well over the course of his career. He was also an ambassador throughout Alaska, to the Nation, and to the international community. His impact knew no bounds and I was privileged to call him a friend. He was an elder, but he treated me as an equal and he taught me so much about politics and policy. He will be dearly missed, and I pray for his beautiful family who will miss him immeasurably,” commented Thiele told Native News Online.

Allyson London, a fellow Tlingit citizen, who served as Miss Alaska USA during 2017, admires Mallott for his advocacy for Alaska Natives.

“Byron was a leader for Tlingit and Alaska Native people. I’ll remember him as a great example of someone who lived his life in service to others. I admire him because he worked hard to make a difference in our communities in Alaska and be an advocate for his people,” says London.

In business, Mallott served as president of Sealaska Corp., Southeast Alaska’s regional Native corporation. He was also the director of the state-owned corporation that runs the Alaska Permanent Fund and served on the board of directors of Alaska Air Group.