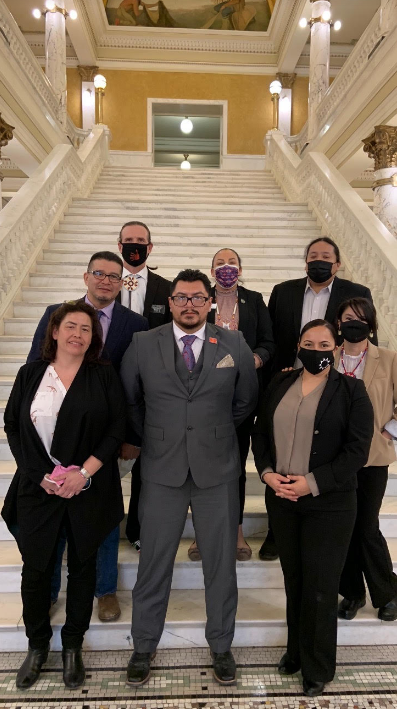 PIERRE, S.D.— On Wednesday, February 17, 2021, a South Dakota state senator introduced a resolution to the Senate Military and Veterans Affairs Committee seeking to rescind the Medals of Honor given to United States soldiers for the involvement and participation in the Wounded Knee Massacre of 1890. Senate Resolution 701 was introduced by fourth-term state senator Troy Heinert, a Sicangu Lakota of the Rosebud Sioux Tribe representing District 26, which includes Blule, Buffalo, Jones, Lyman, Mellette, and Todd County on the Rosebud Indian Reservation.

It passed the Senate Military and Veterans Affairs Committee unanimously on Wednesday, February 17 and moved for a full vote in the South Dakota Senate, also passing unanimously—35-0.

On December 29, 1890, the 7th Cavalry aimed to disarm the members of a Lakota encampment where a scuffle ensued between the parties. An unknown rifle discharged, which instantly exploded to an overreaction by the 7th Cavalry with four Hotchkiss 1.65 inch M-1875 Mountain Guns.

According to many written historical accounts, on the morning of Dec. 29, 1890, nearly 400 Lakota, mostly women and children (two-thirds by some accounts), were gunned down by members of the U.S. Army 7th Cavalry. Subsequently, 20 soldiers were presented with the Medal of Honor – the highest U.S. military decoration.

“The pain from that day is still relevant for many families,” said South Dakota State Senator Troy Heinert to Native News Online. “Without addressing the Medals of Honor, that wound remains open.”

Some estimates place the number of dead as high as 300.

“The Wounded Knee massacre is also one of many examples of Historical Trauma” said Dr. Stephanie Big Crow to the Senate Military and Veterans Affairs Committee on Wednesday, February 17. “Historical trauma is defined here as the ‘collective experience of violence perpetrated against Indigenous Peoples in the process of colonizing the Americas resulting in an unresolved humanitarian crisis for reservation communities.’ That is to say, that this massacre not only caused a trauma on my ancestors but continues to this day to be relived as part of a terrifying and painful history.”

“Those medals are a constant reminder of what our country’s policy was to our ancestors,” Heinart said.

“WHEREAS, to date, the Medal of Honor has been bestowed only 3,522 times, including 126 instances for World War I, 145 instances for the Korean War, 23 instances throughout the Global War on Terror, and 20 times for the Wounded Knee massacre; and WHEREAS, no action has been taken at the federal level to correct this injustice:

NOW, THEREFORE, BE IT RESOLVED, by the Senate of the Ninety-Sixth Legislature of the State of South Dakota, that the Senate hereby requests that efforts be made to investigate each Medal of Honor awarded to the United States Army members who acted at Wounded Knee Creek, Pine Ridge Agency, South Dakota on December 29, 1890; and BE IT FURTHER RESOLVED, that the Senate requests support in this effort from Senators John Thune and Mike Rounds, and Representative Dusty Johnson, with support from President Biden, the Commander in Chief, to do so; and BE IT FURTHER RESOLVED, that it is requested that upon congressional passage the name of each person awarded a Medal of Honor for the acts noted above be removed from the Medal of Honor Roll enabled under section 1134a of title 10 of the United States Code.

Previously, Senate Resolution 701 was introduced in the South Dakota State Legislature in 2020, but failed to pass in the Senate Military and Veterans Affairs Committee.

“I was extremely pleased that SR 701 was unanimously passed by the SD Senate. 130 years was a long time to wait to try and achieve justice for our ancestors, but we are a resilient people and will not stop until we right this terrible wrong,” said Senator Heinert to Native News Online.

The resolution is the official position of the legislative body making official motions to support the process to request the assistance of South Dakota's congressional delegation--United States Senators John Thune and Mike Rounds and US Representative Dusty Johnson--to remove the Medals of Honor for the participants of the Wounded Knee Massacre of 1890.