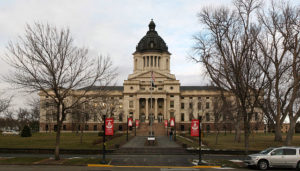 PIERRE, S.D. — South Dakota’s legislature considered two laws involving tribal IDs over the past week, rejecting a voter registration measure and advancing a proposed law that would require businesses to accept tribal IDs as proof of age and identity.

Last week, the Republican-controlled House defeated a proposed amendment to a voter registration bill that would have allowed Native Americans to use their tribal IDs when registering to vote. Claiming that the secretary of state wouldn’t be able to verify information on the tribal-issued IDs, Republicans voted down the measure.

House Democrats criticized the rejection on the voter registration matter.

“The way our voting system is set up does disenfranchise in particular Native American voters,” Rep. Ryan Cwach, a Democrat, told the Associated Press.

Then yesterday, a Senate committee gave its support to a proposed law that would require businesses to accept IDs issued by tribes as proof of age and identity.

Democratic Sen. Troy Heinert introduced the bill after several tribal members told him that some businesses weren’t accepting their tribal IDs.  South Dakota already has a law that requires banks to accept tribal IDs. Heinert’s new measure, which passed committee and will move to a vote by the full Senate, will help clarify that tribal IDs can be accepted for all business transactions.

In 2011, the state of South Dakota first enacted a law to make the tribal ID a recognized form of identification. In recent years, South Dakota tribes have improved their IDs with holographics and other security features. Federal agencies recognize tribal IDs, which can be used for passing through airport security or to verify identity during elections.