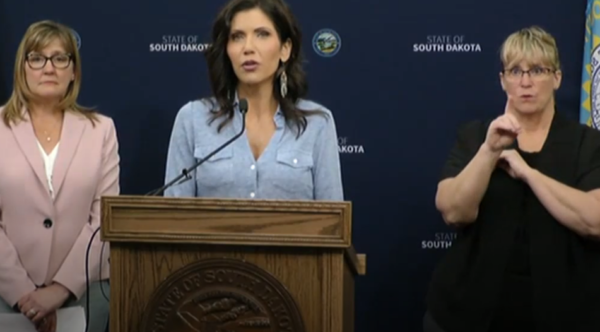 PIERRE, S.D. — South Dakota Governor Kristi Noem has turned to the federal government for help in her ongoing showdown with the Cheyenne River Sioux Tribe and the Oglala Sioux Tribes over roadside checkpoints.

At a press conference Wednesday afternoon, Noem said she asked the South Dakota Attorney General to investigate the “unlawful” checkpoints the tribes set up to protect citizens on their reservations from the coronavirus.

"That investigation, while it is still ongoing, has produced both affidavits and video recordings of these unlawful checkpoints that are in place," Noem said, though she did not elaborate on the contents of the material.

Noem said information from the investigation has been sent to the White House, Department of Justice, the Interior Department and South Dakota's congressional delegation.

By asking the federal government to intercede, Noem is escalating the dispute, which began two weeks ago when she threatened legal action against the tribes for setting up checkpoints at the entrances and exits to their reservations.

The two tribes say Noem has not done enough to stop the spread of the coronavirus in the state. South Dakota is one of a small handful of states that never issued a “stay-at-home” during the COVID-19 pandemic.

There have been 4,177 confirmed positive cases of COVID-19 and 46 deaths from the disease as of Wednesday afternoon, according to the South Dakota Dept. of Health. There are currently 1,108 people sick with the disease, according to the health department.
In response to Noem’s legal threats, leaders of the Cheyenne River Sioux and Oglala Sioux maintain that tribal sovereignty allows them to self-govern and make their own laws for their reservations.

On Monday, the American Civil Liberties Union (ACLU) of South Dakota announced it would provide support for the tribes in the checkpoint battle with Noem.

The perplexed governor says she asked for their assistance to resolve the situation.

Even though Noem threatened to take legal action, she said Wednesday she had not begun any litigation.

"The state is committed to slowing down the spread of COVID-19 and committed to protecting the public health of our tribes and every single citizen in the state,” Noem said.

This is a developing story and will be updated.