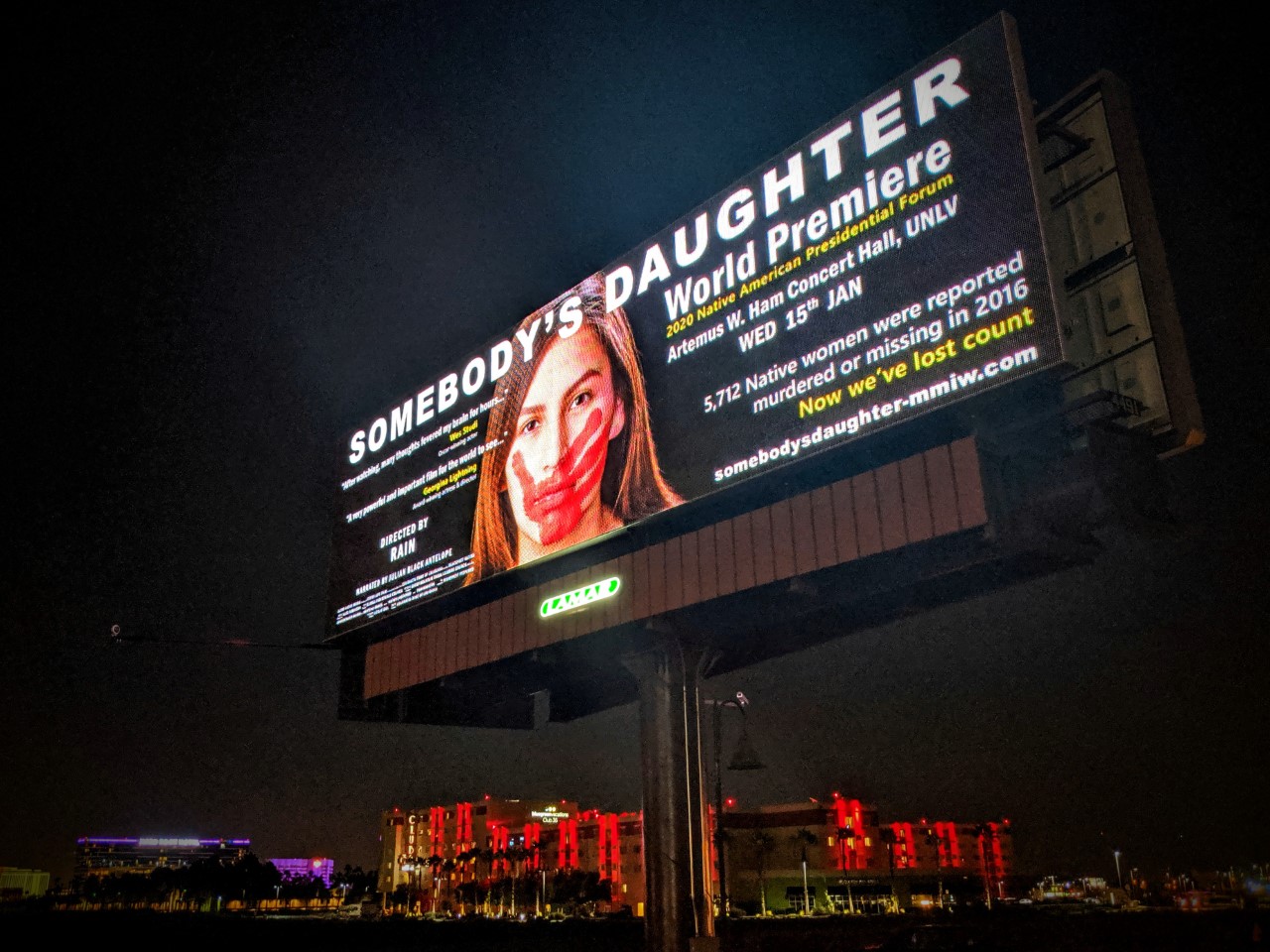 LAS VEGAS — Women trilled. Others cried. Some sat in contemplative silence before they applauded. All were inspired by the MMIW documentary, Somebody’s Daughter, which premiered at the Four Directions and Nevada Tribes' Native American Presidential 2020 Forum in Las Vegas and provided the stand-out moment of the event.

“I deeply appreciated watching the film,” said independent presidential candidate Mark Charles. “It is very powerful and helps people understand at a very systemic level that these tragedies are not being investigated.” 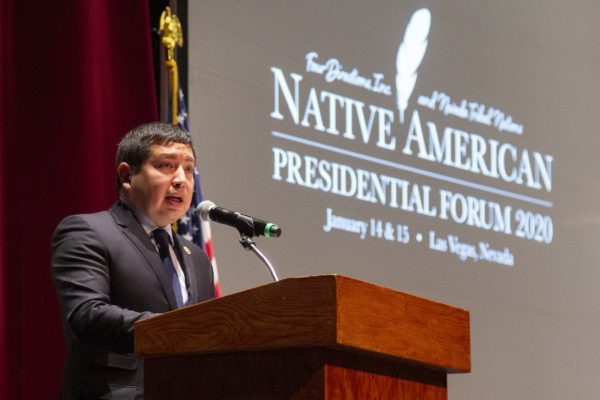 Chairman David Sickey of the Coushatta Tribe of Louisiana introduced Somebody’s Daughter. Sickey’s words moved the audience, as he spoke of the devastation wrought by the MMIW crisis.

“In the state that surrounds our nation, the Coushatta Tribe of Louisiana, our people are categorized by coroners and the Louisiana Department of Health and Vital Statistics as ‘other’ – it is as if we do not exist, and that somehow our women and children are invisible. There is no accurate accounting of MMIW victims in the State of Louisiana. Sadly, this situation will be familiar to many of you throughout Indian Country,” said Sickey.

The Coushatta Tribe is the Executive Producer of Somebody’s Daughter and Chairman Sickey dedicated the premiere to Congressman John Lewis in his fight against stage IV pancreatic cancer, and to Selina Not Afraid and her family. Congressman Lewis supports the film.

“I ask you now to take a moment to send your prayers to Selina Not Afraid and her family. Selina went missing from a rest stop on I-90 just outside Hardin two weeks ago. Her family has searched for her every waking hour since,” Sickey continued.

Hardin, Montana, bordering the Crow Reservation on Interstate 90, is an area of high vulnerability for indigenous women and girls that is highlighted in Somebody’s Daughter. The heart wrenching cases of Hanna Harris, Ashley Loring Heavy Runner, Jermain Charlo and Shacaiah Blue Harding are also told through the experiences of family members. Mindful that the indigenous murder rate is not just impacting women and children, the documentary relays the disappearance of Hub Williamson through the raw emotion of his mother, Rachel.

Chairman Sickey quoted actor Wes Studi, who supports the documentary and its purpose to raise awareness and bring about meaningful and comprehensive federal legislation to address the crisis. “After watching Somebody’s Daughter many thoughts fevered my brain for hours,” wrote Studi. “There is no comfort in watching Somebody’s Daughter, but the search for a solution begins with first knowing a crisis exists,” continued Studi, the only Native American actor to receive an Oscar.

“After this documentary has been screened throughout the halls of authority, those legislators will know this crisis exists. Violence does not discriminate, and neither should our laws,” added Sickey.

Chairman Sickey provided a status update on where the campaign for federal legislation now rests. “The film outlines the federal legislation we seek,” he explained, and emphasized that “no federal laws exist to protect our women and children, our Two Spirit relatives, from the myriad dangers and impacts of this crisis. But we are getting closer: Congressman John Lewis – the ‘Conscience of the US Congress’ - has committed to introducing legislation in the House based upon the proposed acts mentioned in the film; in the Senate, Senator Steve Daines is working on the Senate version. Senator Jon Tester, Congresswoman Deb Haaland and House Natural Resources Chairman, Raul Grijalva, are all standing with us,” Sickey confirmed.

Somebody’s Daughter is both hauntingly beautiful and emotionally devastating and should be recognized as one of the most important documentaries made on not only MMIW, but also on Indian Country in the twenty-first century.

The victims’ and their families’ stories are told through the lens of the legal jurisdictional maze and socio-economic bondage that constricts Indian Country. For the first time on screen, tribal leaders reveal the devastating roles of drug cartels and gangs in the MMIW crisis.

Mayor Pete Buttigieg followed the documentary and committed to “empower a commission” in partnership with the Global Indigenous Council, Four Directions and other organizations actively engaged in addressing the MMIW crisis. Buttigieg affirmed that he would support legislation that includes an Oliphant case fix, which Congressman John Lewis is pursuing.

Senator Elizabeth Warren and Congresswoman Tulsi Gabbard joined the forum by livestream and maintained their previously stated positions on MMIW. Both via video and in a written statement, Vice President Joe Biden provided a forthright summation on the MMIW tragedy, calling it “a stain on our past and present.”

“What’s happening to indigenous women on reservations and across the United States is unconscionable and outrageous.” Last October, VP Biden was the only 2020 candidate to send a representative to the first-ever MMIW tribunal held in the United States.

“As president, I will take a comprehensive approach, one that closes the data gap, increases funding and supports tribes in building their own programs, expands tribal authority, grows coordination among law enforcement agencies and provides additional resources to tribal enforcement, and expands access to culturally sensitive resources for victims and survivors,” assured Biden, adopting the positions advocated for by the Global Indigenous Council, Rocky Mountain Tribal Leaders Council and Great Plains Tribal Chairman’s Association.

During his appearance at the forum, independent candidate Mark Charles from the Navajo Nation continued his now customary impressive oratory coupled with historical acumen. Charles, whose presidential platform includes nominating an indigenous secretary of state and having “Native Nations lead the process of reforming immigration law,” doesn’t offer soundbites but education and shows the path from the past to the present and the continuing legacy of colonial domination. Charles explained that he wrapped his tsiiyéél with red yarn “to remind myself of Missing and Murdered Indigenous Women and Girls.” 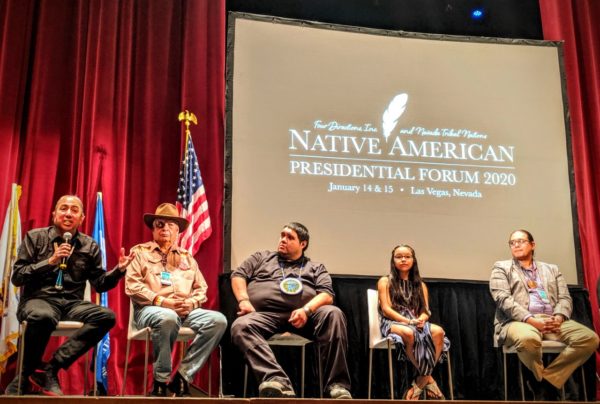 “At the last debate, several candidates said they would propose new laws to ensure that this demographic was protected. But when your Declaration of Independence calls Natives ‘savages’ and your Constitution never mentions women, don’t act surprised when your indigenous women go missing and no-one cares. This is a foundational problem,” Charles asserted.

Tom Steyer, fresh from the CNN debate where he eruditely sidestepped the Warren-Sanders spat, was the only top-tier Democratic candidate to appear at the forum in person. Steyer’s campaign has blanketed Las Vegas in billboards, some that alternate with Somebody’s Daughter on huge digital displays around the Strip. Somebody’s Daughter director, Rain, gave Steyer an MMIW pin prior to his appearance. “It’s going to be hard for me to get through this,” Steyer said with emotion, as he attached the pin before taking the stage. 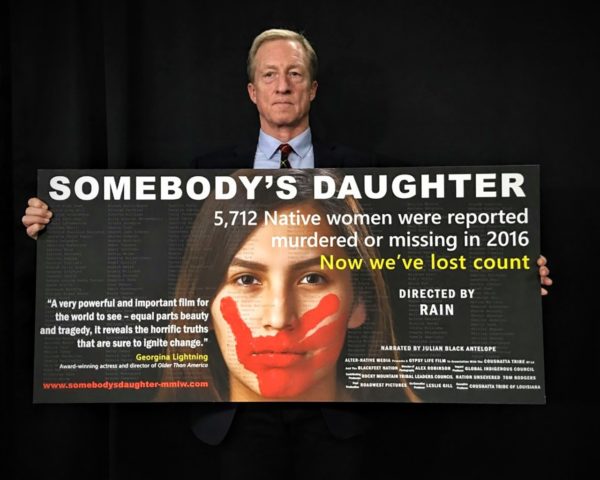 When asked by Councilman Mark Pollock of the Blackfeet Nation if supporting the Reduce, Return and Recover Act - the proposed MMIW legislation tribal leaders advocate for in the film, would be a priority if he was president, Steyer, who is surging in the polls in Nevada, replied, “Yes. I would of course support that specifically.”

“This documentary belongs to us all and in one voice and with one heart we say to the missing and we say to those taken from us – we will not forget you,” concluded Chairman Sickey.