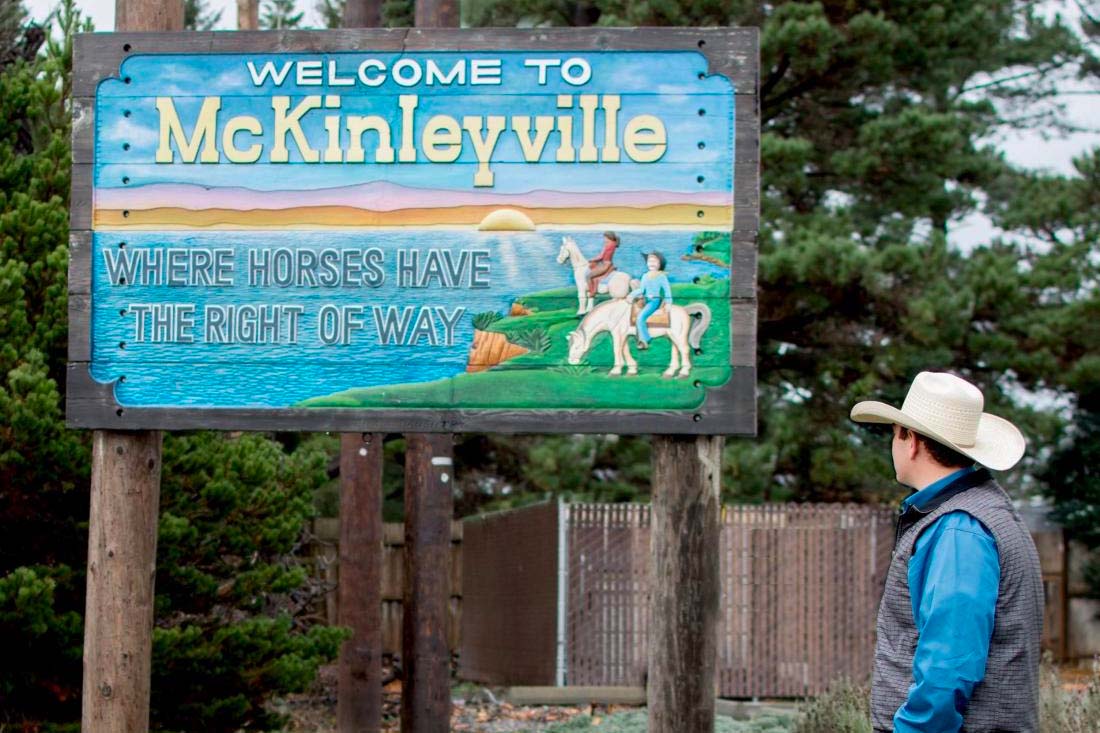 MCKINLEYVILLE, Calif. — The founding of Jamestown was more than 400 years ago, yet people in America are just now realizing they’re on Indian land. Idle at home, many are bound and determined to use this time to right some wrongs, but they forgot to check in with the first peoples of the lands upon which they protest.

Due to COVID-19, record unemployment and California’s strict business closures and gathering bans have afforded people a unique window of time and opportunity to reflect on the places they reside. Simultaneously, people indigenous to these lands and their allies currently have time to hit the streets to educate and demonstrate against centuries-old inequities and injustices.

Social media and news feeds are filled with Natives who now have time to hold protests and host informative Zoom webinars while millions of people are self-isolating at home watching these stories unfold. Articulating key arguments regarding lands and rights that Indigenous people have reiterated since the founding of Jamestown, Native Americans have a captive audience and they know it.

All this to say: some West Coasters have taken it upon themselves in recent weeks to “help” California tribes –– the same tribes who have a long history of being unwilling recipients of various helping hands.

Between 1769 and about 1823, four forts (presidios) and 21 missions were founded along the California coast. Father Junipero Serra, the founder of the California Mission system, didn’t ask the mission Indians if they needed help either.

“In Native/Indigenous cultural ways it is customary that persons who visit or plan events within tribal lands first follow Indigenous protocols and request approval from the people on whose lands it is taking place. We encourage unity, collaboration, and respect for Indigenous protocols,” the Kanap Kuahan Coalition in Southern California said in a July 4 statement.

Their statement was motivated by a non-sanctioned protest organized by an unknown group to remove the statue of Father Serra from Presidio Park, which is located on a hill in San Diego. Father Serra had raised a cross to establish the first western Spanish settlement in the mission system including Mission San Diego and he subsequently enslaved and inflicted other hardships on California Indians.

While Kanap Kuahan does support the removal of statues of Columbus, Serra, and other symbols of colonialism and genocide, the press release included a list of reasons the organization did not endorse or support the protest –– the main reason being the event was “planned without consultation or approval of Kumeyaay Nations.” 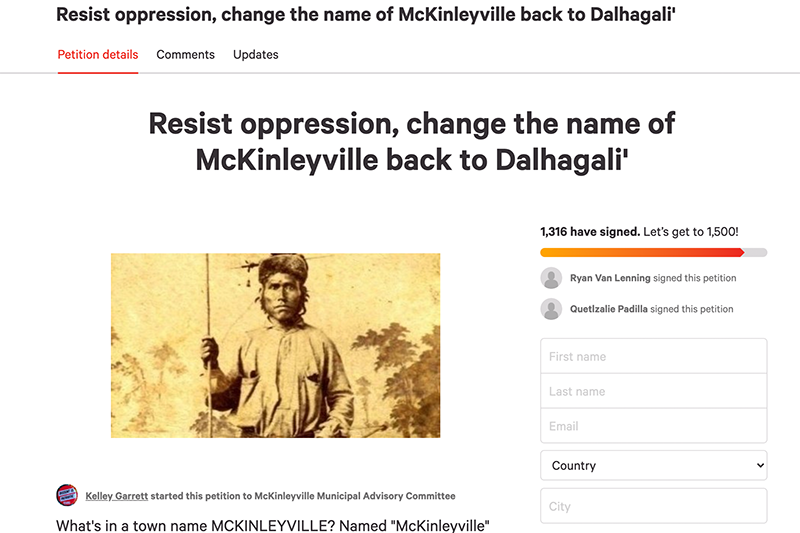 The petition to change the name of McKinleyville. Screenshot via Change.org.

Coincidentally, that same day on July 4, the Mad River Union in Northern California published an article with the headline “Should McKinleyville be renamed Dalhagali’?” and highlighted a petition created by a non-Native resident. More than 1,300 people have signed the petition on change.org, which urges citizens to change the name of the Northern California town of McKinleyville to “Dalhagali’” because, among other things, “the history of thousands of years of continuous habitation of this place by the indigenous Wiyot people has been completely erased from the landscape and consciousness of most current town dwellers.”

There are people of Wiyot ancestry enrolled in rancherias throughout coastal Northern California. According to the U.S. census, 161 people identify with the Wiyot Table Bluff Reservation which is located 25 miles south of McKinleyville, an unincorporated town of about 15,000 Native and non-Native residents and the northernmost point of traditional Wiyot territory.

McKinleyville was named after President William McKinley, who had taken office as the Dawes Commission was dismantling the Five Civilized Tribes. Simply put, McKinley was good at stealing land. Even if the name were to be changed, the town would still sit on unceded Wiyot land.

“We the undersigned would ask that the McKinleyville Municipal Advisory Committee, as representative of community voice and interests, undertake to make recommendation to the County Board of Supervisors to place a referendum on the next ballot –– allowing the community the opportunity to vote on a town name change,” the circulating petition “The Wiyot called this place Dalhagali’” said.

This turned out to be news to the Wiyot Tribe, who was not consulted on the matter.

“I got some flak for that and rightfully so,” said McKinleyville resident Kelley Garrett, who created the petition.

Garrett, who serves as director of the McKinleyville Pop-up Museum, a traveling exhibition of local history, explained that “Dalhagali’” is the possible pre-colonization Wiyot place name, which she sourced off an inset map poster created by the McKinleyville Community Services District. “I had been thinking about the name change for a while since the removal of the McKinleyville statue,” she said.

Wiyot Chair and Tribal Historic Preservation Officer Theodore Hernandez explained that, in 2018, there was a similar online petition advocating for the removal of the William McKinley statue in Arcata (just south of McKinleyville), but because the people of Arcata had taken the petition to the city, the Arcata City Council requested a government-to-government consultation with the Wiyot Tribal Council regarding the tribe’s position. The tribe then decided to take action and unanimously voted for the statue’s removal.

The Wiyot Council debated the McKinleyville name change petition at a July 13 council meeting, and in a 4-1 vote the council ultimately decided against taking action.

Prior to the Wiyot Council’s decision, Garrett told Native News Online that she began her campaign to rename the town on an impulse, and eventually reached out to the tribe for their input. She said she was willing to delete the petition if the tribe disagreed with her effort, but even after the tribe’s decision on the matter the petition remains online.

Chair Hernandez said the tribe discussed the matter briefly, but noted that because it was an online petition, and anyone interested in the name change could sign it, the Wiyot Tribe had no official comment on the effort to change the name of McKinleyville to Dalhagali'.

“The tribe took no official government action,” he said.

“While it is a good protocol to contact the tribe and inform the tribe on emerging social issues, the tribe does not always take official action on them,” he added. “In this case, the tribe might take an official stance on the McKinleyville name change issue if there was an official government action taking place.”

As a federally recognized tribe, Hernandez explained, when it comes to projects pertaining to the protection of their cultural and sacred sites, there is a more formal council decision process which may result in a memorandum of agreement or a programmatic agreement with federal agencies.

Last year, in an act that went beyond most symbolic gestures, the city of Eureka returned about 200 acres of Wiyot land, part of the tribe’s Tulawat village, that was stolen after the 1860 massacre of more than 200 Wiyot people by white settlers. The land transfer will enable the Wiyots to continue their annual "world renewal ceremony" and preserve sacred sites.

“Damage to culturally and religiously significant sites is more than injury to the land, it breaks the spiritual and cultural connection the Wiyot people have had to this place since time immemorial. It will forever impair the ability of the tribe to pass on cultural knowledge to future generations. Once the damage is done, none of this can be repaired. Damage inflicts suffering on the entire Wiyot people, at a time when the historical trauma from the genocide at Tuluwat and elsewhere is still with us,” said Hernandez.

As for Garrett’s active petition, Hernandez added: “The Tribe has no official comment on the petition for the name change in McKinleyville.”

Update, Aug. 7, 2020: On Aug. 7, 2020, after this story was published, Kelley Garrett closed her change.org petition to change the town name of McKinleyville to Dalhagali'.