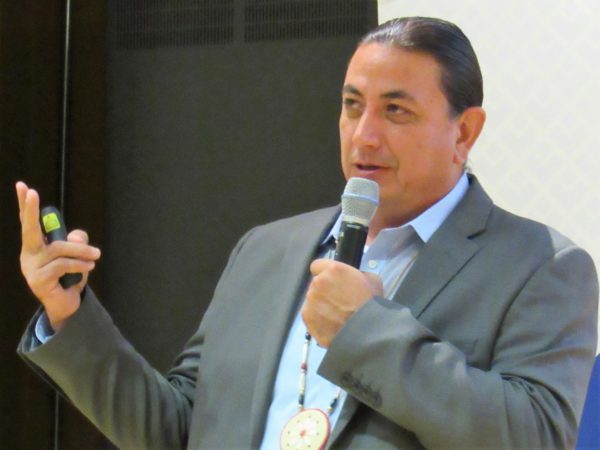 PAUL, Minn. — On Tuesday, the Bush Foundation, based in St. Paul Minnesota, named six American Indians to its roster of 2020 Bush Fellows.

The list of 2020 Bush Fellows includes 24 visionary leaders who are working to shape better futures for their communities from North Dakota, South Dakota and Minnesota.The foundation picked the 24 fellows out of 746 applications.

The fellowship provides recipients up to $100,000 to pursue advanced education, networking opportunities, workshops and training over 12 to 24 months.

“The Bush Foundation believes that strong and equitable leaders are necessary for our communities to be places where every person can thrive,” said Bush Foundation Leadership Programs Director Anita Patel. “These 24 Fellows have demonstrated tremendous capacity to lead change, and we believe in their potential to make an even greater difference.”

David Archambault II, Cannon Ball, North Dakota — David Archambault II has a vision of sustainability and self-determination for the people of Standing Rock. He wants to inspire his reservation with new business models and practices that reverse cycles of generational poverty and government dependence. Archambault believes the people of his Native nation can build their own homes, produce their own food and generate their own power, as their ancestors did for many generations. To advance his ideas and lead this necessary change, he will pursue greater knowledge of innovative systems for housing, food security and renewable energy production, building and modeling what he learns for the tribal citizens of Standing Rock.

Valeriah Big, Eagle Rapid City, South Dakota — Valeriah Big Eagle believes that an equitable education can heal. As one of the first Ihanktonwan women to pursue a doctoral degree, she wants to inspire and empower fellow Native Americans to seek higher education to heal themselves and their communities. She is studying practices in higher education that support Indigenous students and seeks to influence programming and public policy initiatives to improve their graduation rates. She aspires to one day lead a college or university. Big Eagle is in the process of completing her Ed.D., seeking leadership training and becoming more deeply engaged in professional networks to learn how to best influence change.

Joseph Brings Plenty, Eagle Butte, South Dakota — Joseph Brings Plenty believes culture can help the children on the Cheyenne River Reservation find a better way of life. Deeply committed to living on the reservation, he knows that when people learn about where they come from, they start to care more about who they are. Brings Plenty sees that culturally based programs, including a highly successful boxing program he created, help young people empower themselves, their relatives, their community and their nation. To be the strongest role model possible for the next generations, he will obtain a bachelor’s degree and seek greater knowledge of Lakota cultural practices and the Lakota language.

Amanda Carlow, Pine Ridge, South Dakota — Amanda Carlow is witness to the power of the Lakota language. She sees transformation in young people when they learn the language of their ancestors. A leader of the movement to revitalize the language within her Oglala Lakota Tribe, she began speaking Lakota as a youth basketball coach and saw the excitement and interest it sparked. She wants to build a broader effort to increase the self-esteem, self-identity and pride of youth through a Lakota language immersion track at Pine Ridge School. To lead this large-scale change for the reservation, Carlow plans to increase her knowledge through a Ph.D. program in Indigenous language and culture.

Dr. Meghan Curry O’Connell, Elk Point, South Dakota — Dr. Meghan Curry O’Connell wants South Dakota to become a leader in universal access to affordable, high-quality health care. She observes that many people, especially Indigenous people, live long distances from the care they need in this geographically large, sparsely populated state. In her work as a family physician in rural and underserved communities, she has learned first-hand that systemic change is needed to address disparities in and barriers to quality health care. To generate innovative and strategic solutions, she needs to expand her knowledge of finance, health systems, government policy and health law, and to develop persuasive communication skills.

Beau White, Kyle, South Dakota — Beau White is passionate about building Native interest in science, technology, engineering and math (STEM). A proud tribal citizen of the Oglala Lakota Nation, he is one of the first people from the Pine Ridge Indian Reservation to graduate college with an engineering degree. During a challenging childhood, an exposure to the sciences ignited his lifelong passion for STEM. To become a leader who can create new STEM pathways for younger generations, White will study other Native communities that have embraced science. He will also pursue advanced degrees in engineering management to help Pine Ridge solve its infrastructure problems with talent from within the reservation.