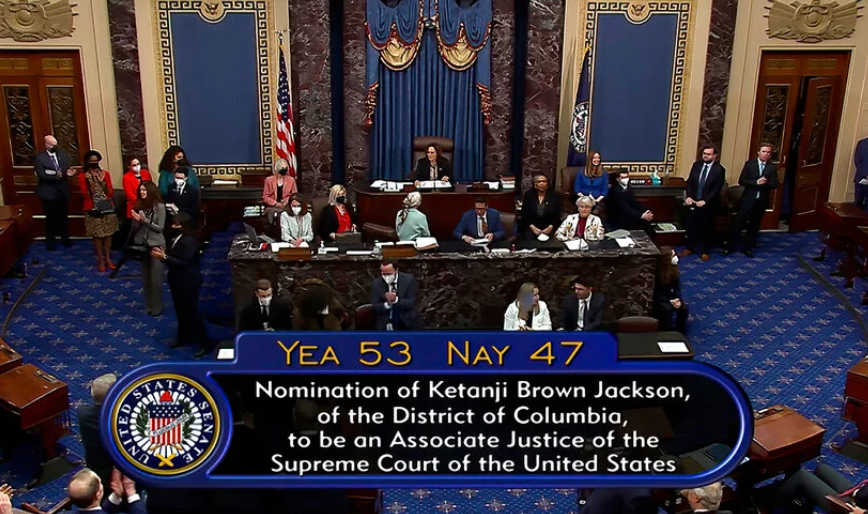 In a historic vote on Thursday, the U.S. Senate confirmed Judge Ketanji Brown Jackson to become the first Black woman to become an associate justice of the U.S. Supreme Court. Jackson will assume the seat of retiring Associate Justice Stephen Beyers.

During her confirmation hearings

In nominating Judge Jackson, President Joe Biden fulfilled a campaign promise to nominate a Black woman to the Supreme Court, if the opportunity arose during his presidency.

“It’s long overdue that a Black woman serve on the Supreme Court and Judge Ketanji Brown Jackson is an incredibly qualified nominee with strong professional and lived experience, character, integrity, and dedication to upholding the Constitution and rule of law,” President Biden said in statement released by the White House on the day he nominated her on Feb. 25, 2022.

“The historic confirmation of Justice Ketanji Brown Jackson is a testament to her qualifications and integrity she has displayed throughout her career. As the first Black woman, and only the third Black person, to serve on the nation’s highest court, her confirmation represents an important step toward a bench that reflects the diversity that makes our country so special. We also extend our congratulations to President Biden for his historic nomination of Justice Jackson and his commitment to choosing a nominee who will interpret the law with integrity and fairness, as well as to the United States Senate for its timely confirmation of such a well-qualified nominee.”

When Judge Jackson takes the oath to become an associate justice, it will mark the first time in the 232 years of history, the U.S. Supreme Court will not have a white man majority. She is the sixth woman justice of the nation’s highest court. She will join three current women on the bench, who will become her co-workers: Justice Elena Kagan, Sonia Sotomayor, and Amy Coney Barrett.

“While Justice Jackson has limited experience in federal Indian law, she has expressly acknowledged the 'sovereign-to-sovereign relationship' between the United States and Indian tribes and 'special trust relationship between Indian tribes and the federal government,’” the organizations said in the letter.