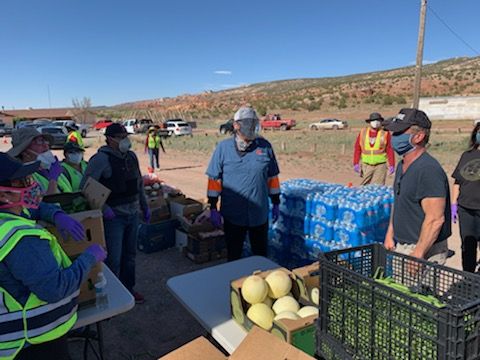 CHINLE, Ariz. — Add Sean Penn to the list of celebrities helping the Navajo Nation in its fight against COVID-19.

The actor, representing his disaster relief non-profit Community Organized Relief Effort, was in Nazlini, Arizona today (Friday) to observe the situation for himself. He met there with President Jonathan Nez, who was helping with food distribution to the community.

He noted CORE performed 45,000 tests in his home city of Los Angeles and “we’re hoping to do the same thing here.”

Nez said the tests will be prioritized for first responders “so they can know immediately if they’ve been infected and need to isolate.”

Meanwhile, another high-level visitor, Dr. Alex Eastman from the Department of Homeland Security, was in Chinle checking out the new COVID-19 ward being built by the Army Corps of Engineers inside the Chinle Community Center.

Eastman, the department’s chief medical officer, said he’s part of a “small, agile team” that includes representatives of DHS, the Federal Emergency Management Agency and the Department of Health and Human Services that is visiting “the hottest spots in the country” for COVID and making sure they have what they need to respond to the pandemic.

In the Nation’s case, he identified medical staff, medical resources and food as the greatest needs and promised help is on the way.

Nez said the arrival of such aid would not only help with healing from the virus but also help heal the relationship between the Nation and the federal government, which, he said, has been strained since the feds still haven’t come forward with their promised $8 billion in aid to Native American tribes.

He also said he had learned a few things from Eastman, including that it’s possible to get emergency supplies like PPE without waiting for the application paperwork to be processed.

For Eastman’s part, he said the Nation is blessed with “good leadership” and he was impressed with the efforts that have been put in place to stem the spread of the virus.

One federal agency, the U.S. Army Corps of Engineers, was still hard at work on the Chinle overflow hospital but planned to be finished and hand over the keys at midnight, said Lt. Col. Robin Scott, deputy commander for the Corps’ Albuquerque District.

The facility has 50 cubicles with piped-in oxygen, internet access and a call button that will buzz a nurse’s station in the building, Scott pointed out. Medical personnel will enter the building through one door and exit through another to avoid contaminating staff who are just arriving for their shift.

“We’re also happy to report we’re going to leave the building with a new cooling system,” Scott said. “I understand it’s like a sauna in here during basketball games.”

Nez said two patients are already in line to be transferred from the Chinle Comprehensive Health Facility as soon as the building is finished, and more will be transferred in from Kayenta and Tuba City.

Eastman said so far the hospitals on the reservation have not exceeded their capacity, but the extra beds will be ready if needed. Between the 50 beds in Chinle, another 60 at Miyamura High School in Gallup and another 40 in Shiprock, the Nation should be able to handle even a substantial surge in cases, he said.

Nez added that the Tuba City Health Care Center, which is treating a high volume of COVID patients, has reported a 30 percent decrease in the number of emergency room visits since the high a few weeks ago.

“So what we’re seeing is a shift from Western Agency, which was the epicenter, to Apache, McKinley and San Juan counties,” he said.

Nez said he and his staff distributed food to 400 Navajo families Friday, including a shipment of fresh produce donated by Santa Cruz County, Arizona.

Donate
Free Newsletter
About The Author
Author: Cindy YurthEmail: This email address is being protected from spambots. You need JavaScript enabled to view it.