“Say Her Name” Host Juliet Hayes: “We’re Not Going to Fall for the Divide and Conquer Syndrome – Indigenous Women are a Sisterhood 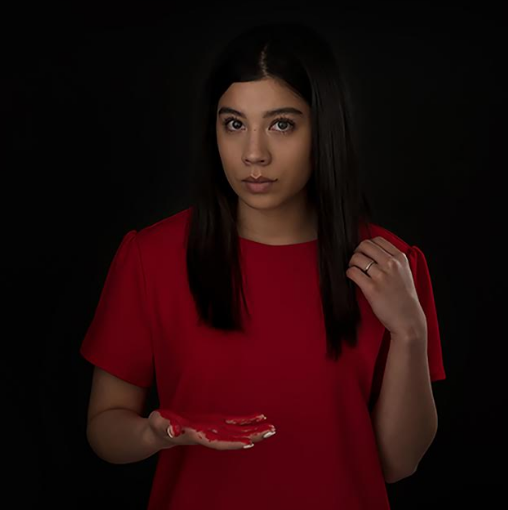 LAKE CHARLES, La. — Twenty-three-year-old Coushatta tribal member Juliet Hayes went from undergraduate student to documentary film presenter literally over a weekend. Hayes is receiving excellent reviews for her debut in the recently completed Say Her Name, one of the most impactful Murdered and Missing Indigenous Women and Girls documentaries ever made. Hayes spoke exclusively to Native News Online about Say Her Name and her experiences in Big Horn County, Mont., an epicenter of the MMIWG crisis.

How did it feel going from undergraduate studies into your debut film in a matter of hours?

It was a bit of a whirlwind. However, I was so honored to have this opportunity presented to me and I wanted to take full advantage of it.

What does the MMIWG crisis and movement mean to you?

The MMIWG crisis is unimaginable and my heart breaks for the families that have lost their loved ones. This film, Say Her Name, is going to demand the attention needed to create change. I am so grateful to play such a small role in this movement that is going to bring justice for our people.

Extractive industry and its “man camps” have a huge part in the MMIWG crisis. You come from a state that is a stronghold for multinational oil and gas companies. What are those companies doing to address MMIWG?

The surrounding regional economies are heavily influenced by boom-and-bust trends. For Indigenous women and girls, of course, their vulnerabilities are heightened when these “man camps” choose to invade areas in our state. This is common to Indigenous communities everywhere extractive industry operates. The Governor of Louisiana, John Bel Edwards, just signed an Executive Order that established a Missing and Murdered Indigenous Women and Girls Task Force. This is the first policy statement to be made that offers protection to Indigenous women and girls in Louisiana. This is a historic moment for the Coushatta Tribe and our chairman, David Sickey, who led this effort. This executive order includes these critical articles:

“Consideration of how temporary habitations that house workers, referred to as ‘man camps,’ can be most effectively policed and monitored, and if existing zoning ordinances need to be amended to achieve that end.”

“Recommendations to ensure that all non-resident workers who have been previously convicted of sex crimes in any jurisdiction register as sex offenders with the requisite authority in the State of Louisiana.”

How did you feel when you were shooting Say Her Name in a notorious border town like Hardin?

I immediately realized that the people in Hardin wanted nothing to do with me or the production of this film. At one point while filming, we were followed around town by at least three Big Horn County Sherriff’s units. I have never received a more unwelcoming greeting in my 23 years of life. It was very clear to me that no one was going to help me out in any way – and they didn’t. I was completely disregarded by a captain at the Big Horn County Sheriff’s Office and scolded and lied to at the Big Horn County Attorney’s office.

In the film, you don’t take “no” for an answer from law enforcement and go into the offices of the Big Horn County Sheriff’s Department and Big Horn County Attorney. What is your impression of their commitment to solving and prosecuting this 50 some MMIP cases in the county?

The Big Horn County Sheriff’s Department and Big Horn County Attorney’s office appear to lack any interest and show zero commitment when it comes to solving these cases. There is no sense of urgency from either of these entities nor is there any responsiveness. The families of these victims are the people doing all of the investigative work and trying to come up with answers – because they are getting completely stonewalled from the sheriff’s department and county attorney’s office.

Somebody’s Daughter was the first film to expose the connection between drug cartels that produce methamphetamine, gangs that distribute it, and human trafficking. In summary, the meth comes into Indigenous communities and Indigenous women and girls are trafficked out. This is happening in Big Horn County. There are witnesses. But there are no arrests or prosecutions.

Kaysera Stops Pretty Places grandmother, Yolanda Fraser, took you to the location where Kaysera’s body was found. How did that feel, and having seen it, what do you think of law enforcement’s theory of how long her body had been there?

There is absolutely no way that Kaysera’s body laid in that yard for five days in plain sight, just steps away from one of the busiest roads in Bighorn County. It’s absolutely ridiculous that law enforcement could come up with such a theory in the first place. I wholeheartedly believe that Kaysera was murdered, and her body was placed there intentionally.

Did any tribal people in Montana ask why an Indigenous woman from Louisiana was presenting a story about Bighorn County?

Absolutely not. Everybody I interacted with on the Northern Cheyenne Nation, the Crow Nation, and the Indigenous people in Billings were all really welcoming and supportive. We’re not going to fall for the divide and conquer syndrome. Indigenous women are a sisterhood. We are all impacted by MMIWG. None of us are immune from this, and all of us can be part of the solution.

The Northern Cheyenne Tribe, which is credited as an impact producer on Say Her Name. Can you speak to that?

President Fisher and the Northern Cheyenne tribal administration were incredibly supportive, kind, and patient. President Fisher permitted us to basically convert part of the tribal offices into a studio for a day, and all of the administrative staff were so helpful and accommodating. Without the tribe’s help, I don’t think that we could have made the filming deadline.

How different are the Crow and Northern Cheyenne nations to the Coushatta Nation?

The Crow and Northern Cheyenne nations are underfunded and lack the basic resources needed to live from day to day. Poverty is very evident and it’s heart-breaking that our Indigenous brothers and sisters are forced to live this way. Grants and funding need to be made available to them on both a state and federal level.

Have you thought about the possibility that people may now look at you as a spokesperson for MMIWG?

Organizations such as National Indigenous Women’s Resource Center, Sovereign Bodies, House of the Moon, and so many others have worked tirelessly toward creating change for the MMIWG crisis – long before I presented this film. However, I would be honored to work alongside any of these organizations if it meant we were protecting our women and girls from this tragedy and putting a stop to MMIWG. I worked with a director who is the strongest advocate I know for elevating the voices of Indigenous women and MMIWG victims’ families. Rain is totally committed to Indigenous women being the spokespeople for this issue and leading the movement for change.

What do you hope Say Her Name achieves?

The situation in Big Horn County cries out for US Attorney General Merrick Garland to initiate a thorough investigation. Hardin is the county seat of Bighorn County, with a population of about 3,500. In Hardin, at least half of the MMIWG cases remain unsolved. 86% of MMIP cases in Montana remain unsolved. Not to mention, Big Horn county has the highest per capita rates of MMIWG cases in the U.S. This crisis has been ignored for far too long and we refuse to put up with the dismissal any longer.

The full film is now available to watch online and is free of charge.

Readers can interact with Juliet during Native News Online’s “Say Her Name Special Event” this Thursday, May 13, at 7 pm EDT (Livestreamed on Facebook).