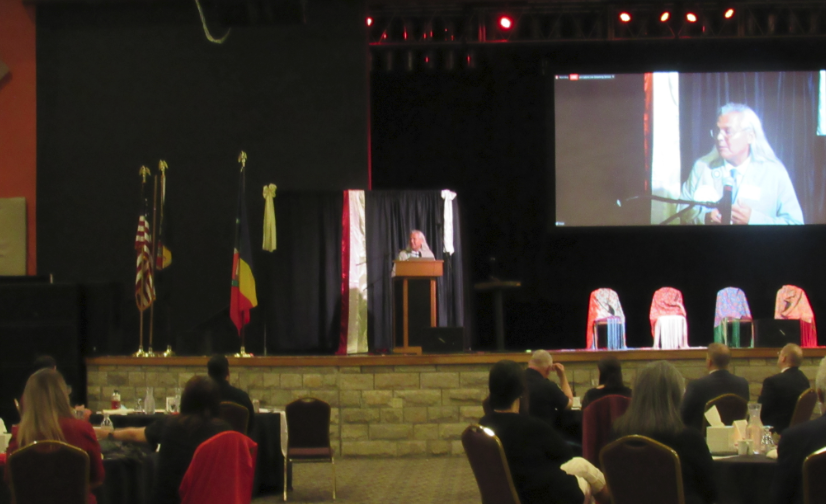 The plans unveiled Tuesday were the final products of work that began late last October.

In her introductory remarks, Chairperson Gravelle provided an overview of the murdered and missing Indigenous persons crisis across Indian Country.

“Native women face rates of murder that are ten times higher than the national average, and murder is the third leading cause of death for Native women,” Chairperson Gravelle said. “Of these statistics, 40 percent of Native women victims are also victims of human sex trafficking, even though we only make up ten percent of the overall population in the United States.

Included in the program were videos of U.S. Dept. of the Interior Secretary Deb Haaland, U.S. Sen. Gary Peters (D-MI), Michigan Gov. Gretchen Whitmer and Michigan Attorney General Dana Nessel. All of these government dignitaries echoed the theme on the importance of law enforcement agencies to work together in a coordinated effort.

“The plans you have been discussing today will have an impact for generations to come and can help families find their loved ones, solve cases and prevent our people from going missing without a trace,” Interior Secretary Deb Haaland said in her video message. “Everyone deserves to feel safe in their communities, but the missing and murdered Indigenous peoples’ crisis is one that Native communities have had to face since the dawn of colonization. For too long, this issue has been swept under the rug with the lack of urgency, attention and funding.”

The intention of the tribal community response plans is to have tribes have in place the plan to improve the handling of emergent missing person cases by outlining how tribal governments, law enforcement, and other partners can best work together to respond to such cases.

“Our overarching purpose was to articulate a MMIP Tribal Community Response Plan. While there was a great volume of work done to draft our response plan, I see it as a beginning to hone our skills to prevent, rescue and recover our victims,” Sault Ste. Marie Tribal Chairperson Aaron Payment said. “Our Victims Services teams helped write the plan to ensure we are caring for victims and their families.”

The goal of the tribal response plans is to collectively utilize all available resources within a victim-centered, trauma-informed and cultural-honoring response between tribal government services, including law enforcement.

Both plans of the two tribes included language about sensitivity relating to missing and murdered Indigenous person cases.

U.S. Attorney by the U.S. District Court for the Western District of Michigan Andrew Birge said the plans developed by the two tribes will serve as a model for other tribal and non-tribal communities.

Michigan is among the first of six pilot-program states developing community response plans, in accordance with the U.S. Attorney General’s Missing and Murdered Indigenous Persons Initiative and the President’s Operation Lady Justice Task Force. Importantly, these plans likewise further the goals of the recent Savanna’s Act legislation. The other states are Oklahoma, Montana, Minnesota, Alaska and Oregon.

Tuesday’s unveiling coincided with a month-long awareness campaign about missing and murdered Indigenous persons. Across the street from the Kewadin Casino, the Advocacy Resource Center is hosting a REDress Campaign, a powerful public display, with red dresses hung to commemorate all “Missing Sisters” across Indian Country and to honor their memory.

The REDress campaign originated in Canada by Jaime Black of the Metis aboriginal group.