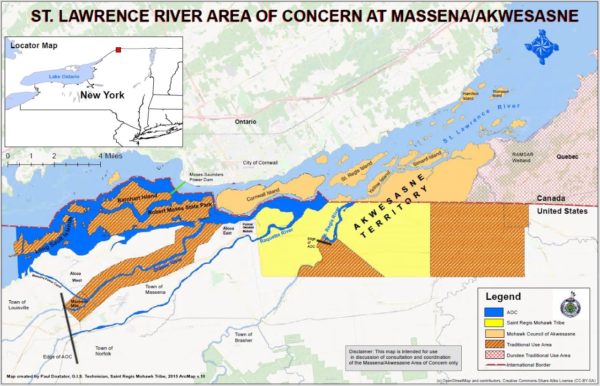 The agreement is a first-of-its-kind across the United States portion of the Great Lakes and provides a roadmap for coordinating studies and restoring natural and cultural resource uses between the two government agencies, while recognizing their unique jurisdictions and shared interests, according to a news release distributed on Wednesday, January 22, 2020.

The work to finalize this cooperative agreement took several months.

“The formalization of this agreement is the culmination of a new, exciting, and historic partnership between the Saint Regis Mohawk Tribal Council and New York State,” said DEC Commissioner Basil Seggos.

Areas of Concern are geographic areas around the Great Lakes that are environmentally degraded.

In 1987, the Great Lakes Water Quality Agreement designated 43 AOCs in order to focus restoration work on these areas. The Massena area of the St. Lawrence River was originally listed as an AOC because of elevated levels of heavy metals and PCBs in sediments, wildlife, and water samples collected in the lower Grasse, Raquette, and St. Regis rivers. Significant progress is being made in remediating and restoring these waters, but more work remains.

The agreement also includes the formal renaming of this unique location from the “St. Lawrence River at Massena” to the “St. Lawrence River Area of Concern at Massena/Akwesasne” to identify the efforts of the Mohawk governments at Akwesasne to protect and enhance the water quality of territorial waterways. A new map has been developed that captures the extent of the Akwesasne Territory and identifies traditional use areas within the Area of Concern.