Rocky Boy Reservation Celebrates the Return of the Buffalo 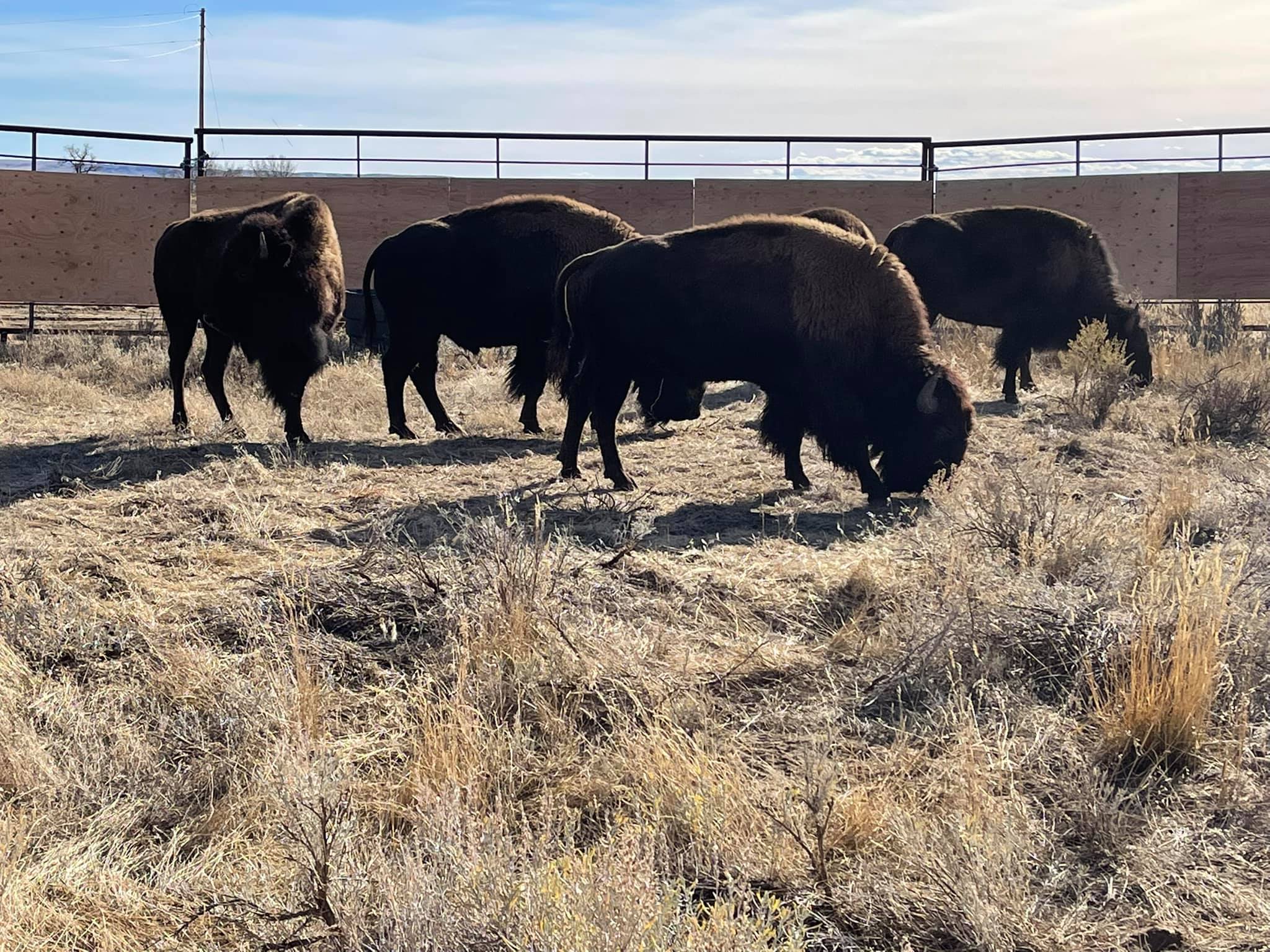 No buffalo have roamed north-central Montana’s Rocky Boy Reservation since the 1990s. And the palpable absence of the animals left a hole in the health and harmony of its Chippewa Cree residents.

“The buffalo is one of the main dudes in our biggest ceremony. We offer ourselves to him in that setting,” said Jason Belcourt, Rocky Boy Sustainability Coordinator, and head of the Rocky Boy Buffalo Project. “When we have that ceremony, I look around and there's no buffalo. How can we have a ceremony if there's no buffalo? Are our prayers even being heard?”

Now that the buffalo are back, those prayers are primed to be amplified and answered.

Rocky Boy is getting a major dose of buffalo medicine via the arrival of 11 animals  supplied by the American Prairie Reserve and the Confederated Salish and Kootenai Tribes of the Flathead Reservation (CSKT). The new residents will occupy 1200 acres surrounded by 7.1 miles of fencing.

All 11 new buffalo will be honored with a day of events including guest speakers, traditional singing and dancing and a pipe ceremony.

“This is an historic event. When they come home, they're going to be bringing something good with them. They're going to be bringing in spirituality and an identity with them. So we know who we are and where we came from,” Belcourt said. “And by knowing that, maybe we won't be susceptible to so many social ills that plague our Indian reservation lands, like alcoholism and suicide.”

The return is the result of more than two years of planning, grant-writing, fundraising and fence-raising carried out by Belcourt, his seven-member board, contractors, and more community members eager to be involved in the process.

“The buffalo picked each and every one of us to pick this fight on his behalf,” Belcourt said. “He’s making a boom and he’s coming back.”

It’s a boom resonating throughout Indian Country. A major movement is afoot to replenish reservations with buffalo for cultural and food sovereignty purposes.

The Rocky Boy return comes at a pivotal time, as the Senate Indian Affairs Committee works to pass The Indian Buffalo Management Act. According to congress.gov, the Act would establish “a permanent program within the Department of the Interior to develop and promote tribal ownership and management of buffalo and buffalo habitat on Indian lands.”

Rocky Boy’s Montana neighbors, including the Flathead, Crow, Northern Cheyenne, Fort Peck and Fort Belknap reservations, are among the reservations with the biggest buffalo populations. Other entities leading the way and working in tandem to bring buffalo back are Yellowstone National Park and the American Prairie Reserve in Malta, Montana. The breakthrough organization formed about 30 years ago and is now known as the Intertribal Buffalo Council. The federally recognized council has 69 tribes in19 states as members, with a total herd of more than 20,000 buffalo.

Belcourt connected with the American Prairie Reserve and a mutually beneficial partnership was born.

“It fits nicely in with our goals of furthering conservation of the species and fits in great with the tribe’s goals of returning bison to their lands,” said Scott Heidebrink, Senior Bison Restoration Manager at the American Prairie Reserve. “In talking with Jason and, working with his team, we could see the excitement and the meaning it has to bring something like this back to them. I foresee them being very successful over the next few years as their program grows.”

The American Prairie Reserve had already worked with other reservations on buffalo conservation, but Heidebrink said the Rocky Boy collaboration was an entirely different animal.

“The unique thing about Rocky Boy is that they're starting at ground zero and when we started working with Fort Peck and Fort Belknap, they already had established herds,” Heidebrink said. “The hardest step about bison restoration is getting those first bison on the ground, because there's a knowledge gap, there's a management gap, and it's expensive.“

Recognizing the initial challenges, Belcourt and his board approached the reintroduction cautiously.

“We told them we were looking for a small herd because we wanted to reintroduce ourselves to the buffalo to make sure that we could take care of them and be sure we're doing it right,” Belcourt said.

After Belcourt and his board secured two bulls and four cows from the American Prairie herd, they had no idea that more buffalo were in store.

Belcourt soon received a call from the Confederated Salish and Kootenai Tribes’ bison program, offering five more animals. The board wondered if they had the resources to make it work.

“It was decided, yes, we do,” Belcourt said.  “It was a gift from the tribal neighbors and we better not turn down that gift.”

CSKT’s McDonald said it made perfect sense for his tribe’s conservation program to partner with the Chippewa Cree.

“They definitely are peoples that utilized buffalo in the past historically, so it’s good to have that brought back to them and anyone who has buffalo as a part of their culture and food sovereignty,” he said. “Any time we can increase the buffalo population in North America, that’s a good thing. ”

The public is invited to join in the celebration for the new buffalo, which begins at 9 a.m. at the new Chippewa Cree Tribal Buffalo Pasture, about a mile from Box Elder, Montana. For more details, visit the Rocky Boy Buffalo Project Facebook page.