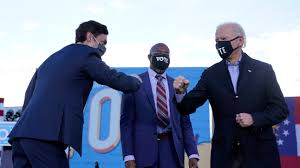 ATLANTA — Americans woke up Wednesday morning to the news Reverend Raphael Warnock was elected to the U.S. Senate. Warnock beat incumbent Sen. Kelly Loeffler in Georgia’s runoff election. With Warnock’s victory, the Democrats gained one seat in the Senate and inch closer to control of the Senate.

In the other race in yesterday’s election between Democrat Jon Ossoff and incumbent Sen. David Perdue, Ossoff led by a razor-thin margin of some 12,000 votes Wednesday morning. The race was too close to call with 98 percent of the vote in.

The remaining unaccounted votes are in heavily Democrat areas. If Ossoff holds on to his lead and wins the remaining undetermined Senate seat, the control of the Senate will flip to Democratic control. In that case, the Senate will be 50-50 and with incoming Vice President Kamala Harris, a Democrat, will cast votes when needed to advance the Biden administration’s agenda.

Warnock becomes the first Black senator from Georgia. He is currently pastor of Ebenezer Baptist Church in Atlanta where the Reverend Dr. Martin Luther King, Jr. pastored during the 1960s.

The Warnock-Loeffler race was called Wednesday, close to 2 a.m. – EST.

Before the race was called, Warnock in a livestream, thanked his supporters and said he would represent all citizens of Georgia, not only those who voted for him.

"We were told that we couldn't win this election, but tonight, we proved that with hope, hard work, and the people by our side, anything is possible," Warnock said. "So, Georgia, I am honored by the faith that you have shown in me. And I promise you this tonight: I am going to the Senate to work for all of Georgia."

With the control of the Senate at stake, the runoff races drew much national attention. On Monday President Trump and President-elect Biden were in Georgia to campaign for the respective candidates from their party.