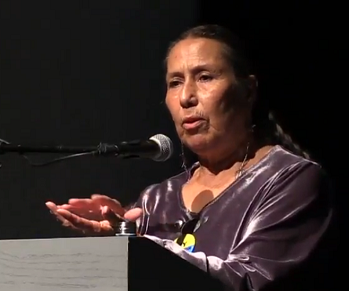 In recognition of the state’s American Indian Day, Martin’s theater is hosting “Be the Change. Become the Solution,” an event dedicated to the Murdered and Missing Indigenous Women & Relatives (MMIWR) crisis.

Central to the American Indian Day program are screenings of the critically acclaimed MMIWR documentaries Somebody’s Daughter (1492-) and Say Her Name, written and directed by award-winning filmmaker Rain.

Rain dedicated Say Her Name to his aunt, the credit reading, “In honor of Casey Camp-Horinek who continues the revered tradition of Indigenous warrior women.” The filmmaker will join his aunt for the keynote address.

“It’s always an honor to speak on the same stage as my nephew,” said Camp-Horinek.

Camp-Horinek has an extensive filmography, dating back to the 1988 movie, The Trial of Standing Bear. She subsequently appeared in Geronimo, Lakota Woman, DreamKeeper and Barking Water. Camp-Horinek most recently played Grandma in the groundbreaking hit series, Reservation Dogs.

In the upcoming Avatar: The Last Airbender, Camp-Horinek has the role Gran Gran. She is also one of three principal contributors to The Doctrine of Recovery documentary, appearing alongside Crystle Lightning (Trickster/ Yellowstone) and Juliet Hayes (Say Her Name). Directed by Rain, The Doctrine of Recovery is scheduled for release in summer 2022.

“This event will serve as a pilot for a series of community conversations we are planning to launch with art and culture luminaries,” said Guillermo Tilley, General Manager of George R.R. Martin’s Jean Cocteau Cinema. Martin is the author of the A Song of Ice and Fire novels, which were adapted into the worldwide entertainment phenomena Game of Thrones.

Proceeds from the MMIWR event at Martin’s Jean Cocteau Cinema are being donated to support the House of the Moon (HOM) Indigenous Women’s Empowerment and Self-Defense Facilitator Training Program. Camp-Horinek is one of the program’s founders.

“House of Moon felt like the expansion of our women’s teachings in a way that must have been gifted in dream and ceremony. To be among women of different nations and locations, yet gathered through the sacredness of fire, air, water, and earth, proved to be an experience of empowerment only Wakonda could have guided,” Camp-Horinek reflected, upon the completion of HOM’s pilot program in 2021.

A hereditary Drumkeeper, Casey Camp-Horinek co-authored the Indigenous Women’s Treaty to Protect Mother Earth and has traveled globally to gather signatures and bring awareness “to the peril facing humanity due to climate change.”

“We must stop lateral violence among women. We need to remind each other just how powerful we are, and what strength we were given just by being born female,” she begins. “We can create life. We are part of a natural cycle. Our partners, our menfolk, they have to be brought into this empowerment as well. So many times, if we turn upon each other, that impacts them. They feel it,” Camp-Horinek continues.

“We risk the whole family system breaking down when we turn upon each other. When that happens, you see tragedies like the Missing and Murdered Indigenous Women and Girls in our communities. You see the desecration of the buying and selling of all the things that we consider to be sacred – whether it’s our very bodies or our spiritual essence. Whether it’s giving up land to buy into corporate greed, to permitt oil and gas to be drilled on your traditional lands. When that happens, there is confusion. They call those resources. We call them sources of life. Remove that ‘re.’ These are finite sources of life inside our Mother, the Earth. They were placed within Her body by the Great Mystery. That is where they belong. Our one Mother is having to take drastic steps right now, as you or I would, if we were having our vital organs torn apart. She will endure. The question is, will we?” asks the Ponca Elder and Environmental Ambassador.

Casey Camp-Horinek has been at the forefront of the Indigenous rights movement for some 50 years, and she has campaigned for environmental justice on tribal lands throughout the Western Hemisphere.

Her stature as a defender of Mother Earth against what she describes as “the fossil fuel regime” was displayed for the world to see at COP 26 in Glasgow, Scotland, last November. One of the central venues for the UN Climate Change Conference was illuminated with her image and wisdom.

“Since they got here, the colonizers have used and abused. I never thought I’d see anybody buying water when I was young. Their way of buying and selling the sacred, their crazy schemes like carbon capture and carbon trading, are unnatural. Their disconnect from our Mother, the Earth, is leading to humans becoming like lemmings and jumping off a cliff,” Camp-Horinek warns.

“Our species is in danger. We must, as Indigenous people, teach our ways that have informed us for millennia. We must do this so that others can understand and save themselves, and by doing so, save our species and save all of our generations to come,” she implores.

American Indian Day was designated by the New Mexico State Legislature to honor the late Senator John Pinto who passed in 2019. His daughter, Senator Shannon D. Pinto, now holds that seat and is working to see the passage of SB 12, a comprehensive MMIWR bill that, among many articles, would see the state declare the MMIWR crisis a state of emergency.

Senator Shannon Pinto is among the sponsors of the MMIWR speakers and march that begins in Santa Fe’s historic Plaza at 9 a.m. on Friday, February 4th and continues to the State Legislature, before progressing to the Jean Cocteau Cinema for the screenings of Somebody’s Daughter (1492-) and Say Her Name, with the keynote addresses by Casey Camp-Horinek and Rain scheduled to begin at 2 pm. Tickets for the event are $5 and can be purchased at shorturl.at/lADK4