Last Friday was a milestone for Rep. Tom Cole (Chickasaw), who represents Oklahoma’s 4th congressional district because on that day he became the longest serving Native American in history to serve the U.S. House of Representatives. 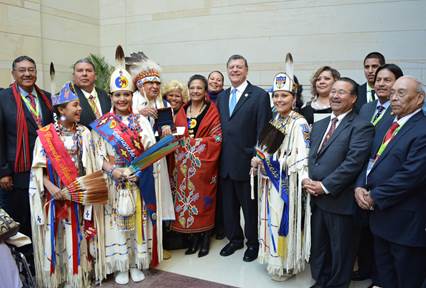 The previous record was also held by an Oklahoman and member of the Chickasaw Nation, former Rep. Charles David Carter, who served in the House for a total of 7,048 days from 1907 to 1927.

“I am honored to reach the milestone of becoming the longest serving Native American in the history of the House,” Cole said. “When I entered Congress, I knew tribal issues would be an area I would focus on a great deal in light of my personal heritage and having observed the unique role of tribes in my community. It is indeed a special heritage that I was brought up to appreciate and treasure, and I have always been inspired by numerous family members who worked hard to preserve it and advance the interests of our tribe.”

Cole says he was most inspired by his late mother, Helen Cole, who not only taught him to know and understand what it meant to be tribal but also sparked my interest in politics.

“I am proud of my record as a champion for Indian Country. In addition to authoring, sponsoring and supporting numerous pieces of legislation, I have embraced my role as a resource for my colleagues, helping them understand tribal sovereignty, the federal government’s trust responsibility and how we can and should work in a bipartisan way to solve some of the issues facing tribes. While numerous strides have been made, there is still more work to do. In the days ahead, I remain committed to furthering, highlighting and elevating these important issues.”

Cole has served as co-Chair of the Congressional Native American Caucus since 2009.

Throughout his current tenure in the House, he has sponsored 24 tribal bills and cosponsored more than 200 – including the Chickasaw National Recreation Area Land Exchange Act of 2004 (signed into law on October 30, 2004), the Stigler Act Amendments of 2018 (signed into law on December 31, 2018), the Indian Healthcare Improvement Act, the Indian Country Economic Development Act and the Native Language Immersion Student Achievement Act. He has championed Carcieri Fix legislation since it was first introduced in 2009, and he has either sponsored or cosponsored it every subsequent Congress. Cole has also been a strong advocate for reauthorization of the Violence Against Women Act (VAWA) and the inclusion of important provisions relating to tribal authority to address violent crimes against Native women and children.