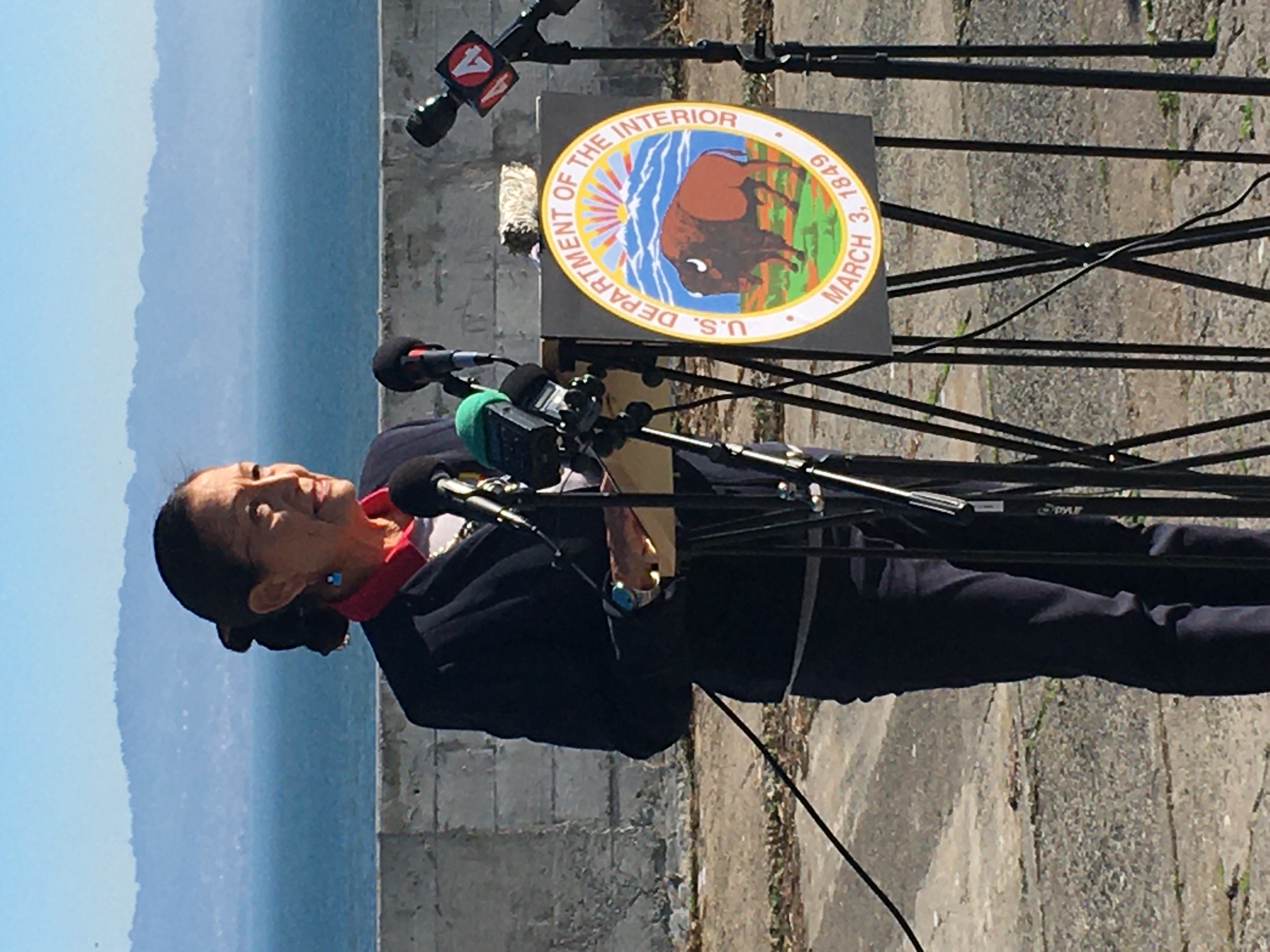 On Saturday, November 20th, Secretary of the Interior Deb Haaland (Laguna Pueblo) visited Alcatraz Island in San Francisco, Calif., to commemorate the 52nd anniversary of its occupation by Indigenous activists in pursuit of Tribal self-determination. Secretary Haaland delivered remarks about the progress that has been made in Indian Country since, as well as the work needed ahead.

Remarks as prepared for delivery are below:

Guw’aadzi haupa – greetings everyone. I am honored to speak today from Alcatraz Island. Like many of the public lands in the care of the Department of the Interior, these lands tell a story, and you can feel it.

Some may think of Alcatraz Island as a place that movies and novels have described where prisoners were kept in cells and tried to escape, but for me, and for many Indigenous people, this land tells another story.

I didn’t understand it then, but my very existence as a Native child was in some ways an act of defiance against historic policies to exterminate Indigenous cultures, traditions, languages, and essentially us as a group of people.

We are the descendants of grandparents, aunts, uncles and parents who were stolen from their homes and from their families so that their cultures, traditions, and languages could be wiped away from their memories. Many of us come from families who were relocated from our homelands with broken promises by the federal government that their children would have better lives.

In November of 1969, a history began with acts of defiance to “Take the Rock.” That history -- in many ways -- paved the way for the Tribal self-determination policies that President Biden and I championed just this week as we gathered with Tribal leaders for the first White House Tribal Nations Summit of this Administration.

52 years ago, the situation was dire.

The federal government had walked away from their promises to help Indigenous people who were forced to relocate to urban areas, federal agencies refused to abide by basic consultation standards, and many Native communities had lost large swaths of their lands.

When Indigenous people are separated from our homelands, from our traditions and from our people, the impacts are more than physical – they are spiritual. They manifest deep in our bodies... in our hearts... and they have lasting and inter-generational consequences.

I remember reading countless stories of young Indigenous mothers who couldn’t get housing or food for their children, Indigenous students facing discrimination at school, and terrible abuse of Indigenous people on the streets of many American cities.

It harkens back to the memories of other kids making fun of my braids or my dark skin when I was a little girl. I never told my mother about these things – I didn’t know it then, but I felt ashamed. So many of us did, and we didn’t have the words to describe it.

It is a feeling that tears at our souls and is in direct opposition to who we are as people. We cultivate community. We care for our environment. We help each other. We crave connection to our ancestors. We love the Earth.

The occupation of Alcatraz Island by Indigenous people in 1969 was more than a call for action, it was a cry for a sense of community and the lifeways that were stolen from us. Alcatraz was borne out of desperation. Out of this we gained a sense of community and visibility in the eyes of the federal government. But more than that, our Indigenous identities were restored.

Many people romanticize the occupation of Alcatraz, but we cannot overlook the hardships that families endured over those two years. But because of the sacrifices that were made in this place, we no longer have to act out of desperation.

The fact that I’m standing here today is a testament to that fact. I am here. We are here. And we are not going anywhere.

We are in a new era. An era in which we can embrace our identities as Indigenous people and be proud of how much we have accomplished. An era of real opportunities to engage with the federal government.

In which the President of the United States gathers Tribal leaders together for a White House Tribal Nations Summit so that the policies we create reflect the needs of Tribes. So that Tribal leaders have a real seat at the table before decisions are made that impact their communities.

It’s that commitment that drives the work we do at the Department of the Interior.

Whether it’s restoring Tribal homelands and empowering Tribes to make decisions for their communities or putting the power of the federal government behind the work to address the Missing and Murdered Indigenous Peoples crisis and the intensive process we are undertaking to heal from the terrible impacts that Indian Boarding Schools have had on our communities – we are centering Indigenous voices in all of our work.

We are still here. The will to survive is engrained in us - passed down through the generations by our ancestors.

It’s already having an impact – thanks to President Biden’s compassionate leadership:

I know what it means to visit a place where ancestors once walked and lived – to feel their presence and feel a spiritual connection to that place. It gives me chills just thinking about how just last month, President Biden announced permanent protections for our ancestral homelands in Bears Ears National Monument.

This week, we announced that Interior is taking action to protect Chaco Canyon and the greater connected landscape with its rich Tribal and cultural legacy in northwest New Mexico. Chaco Canyon is a sacred place that holds deep spiritual meaning for the Indigenous peoples whose ancestors lived, worked, and thrived in that high desert community and have cared for the area since time immemorial.

We also announced that Interior and 16 other federal agencies have formally committed to protecting Tribal treaty rights in agency policymaking and regulatory processes.

We launched an interagency initiative to preserve, protect, and promote the rights and freedom of Native Americans to use, practice, and develop Native languages.

Additionally, the President has signed the Bipartisan Infrastructure Law, which will make historic investments in Indigenous communities. This is billions of dollars that will bolster community resilience, replace aging infrastructure, and provide support needed for climate-related relocation and adaptation.

This funding and these efforts will be transformational in our communities. But investing in Indigenous people will not alone solve the challenges we face. We have schools and infrastructure to build. We have legacy pollution to address. We have communities that are literally being washed away by coastal erosion.

And there is a racism in this country that continues to target Native people. Offensive names, mascots, and rally cries are not a thing of the past. But their time has come. And as long as I have a platform to speak from, I will stand against them.

That is why yesterday, I used my authority to ensure that “squaw,” which is used in the names of hundreds of federal land units, is never used again. Our nation’s public lands and waters should be places to celebrate the outdoors and our shared cultural heritage – not to perpetuate the legacies of oppression. Indigenous people, and in particular women, know how offensive this word is. And I am proud to be in a position to rid federal places of it.

To this end, we have created important advisory committees that will advise on other derogatory terms whose expiration dates are long overdue. We will have a process that includes engagement with Tribes, state and local governments, and the public.

Representation matters. Being here matters. No longer do Indigenous people have to occupy a site to get the attention of the government. We are at the table and we are not giving up our seats.

We have a long way to go to fully heal from the traumas created by historical oppression. I know that removing racist names, investing in broadband for Tribal communities, and protecting Native languages won’t change everything. But change – even if incremental – is still change. And our moment is now.

With Indigenous voices in power, perhaps we can create the world that those who occupied “The Rock” envisioned – one of equity and justice.

I know that I stand here on the shoulders of so many leaders who came before me. I stand here, because the path that many carved ahead of me was clear, and I am very grateful for that.

I intend to work with and for all Native people so that we can ensure Indigenous children have every opportunity to achieve their dreams and one day stand on my shoulders to achieve more than we can even dream of.

Watch Secretary Haaland’s remarks on the Department of the Interior’s YouTube channel.