Protests Erupt in Oklahoma City and in Tulsa 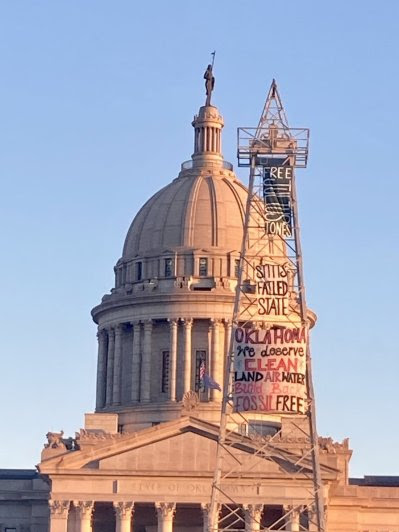 On Monday, two people were arrested during Governor Kevin Stitt’s fourth annual State of State Address inside the House chamber at the Oklahoma State Capitol and banners were unfurled on the oil derrick outside the state capitol building in Oklahoma City, while in Tulsa an officer was injured and two protesters were arrested at a demonstration of support for the release of Leonard Peltier.

According to the Indigenous Environmental Network, Indigenous women and their allies carried banners with messages about climate change, the state’s response to the COVID-19 pandemic, and uplifting tribal sovereignty, to the annual address. According to local law enforcement, they were arrested for “disturbing legislative proceedings.”

The names of the two women who were arrested were quickly released to the local news as Cheyenne Morgan, United Keetoowah Nation and Oglala Lakota, and Kelsey Cooper, Cherokee Nation and descendant of Choctaw Nation of Oklahoma. They were a part of an organized protest at the annual governor’s speech that also begins the state’s legislative session. Cooper was booked into the Oklahoma County Detention Center, but does not have a court filing in Oklahoma County, said the clerk’s office to Native News Online.

“Inside the Capitol, two Indigenous women from the Cherokee Nation--United Keetoowah Band and Oglala Lakota Nations disrupted Stitt’s speech by unfurling a giant red banner depicting Governor Stitt’s image with a covid mask and the words ‘land back’ etched into it behind the Speaker’s podium,” wrote the Indigenous Environmental Network in a press release. “From Black Wall Street to McGirt we will not let Oklahoma’s anti-Indigenous, anti-Black elected officials continue to get away with murder or violence against our communities and lands.”

Earlier in the day, it was reported that several banners had to be removed by the Oklahoma City Fire Department that were hanging outside of the state capitol building. The banners were hung on an oil derrick and read “Free Julius Jones,” “Stitt’s Failed State,” and “Oklahoma: We Deserve Clean Land, Air, Water. Build Back Fossil Free.”

“Since Stitt has taken office he has done everything he can to attack tribes and tribal sovereignty, wasting taxpayer dollars on frivolous lawsuits while doing it,” said the group of demonstrators in a statement. “Instead of working with tribes, Stitt has spun the narrative that Oklahoma is somehow now more dangerous while ignoring the fact that prior to [McGirt], the state only cleared 36% of reported robberies, murders, rapes, and aggravated assaults.”

The 2020 U.S. Supreme Court McGirt decision ruled that members of American Indian tribes who commit crimes on Indian reservation lands cannot be prosecuted by state or local law enforcement and must, instead, face charges in tribal or federal courts.

Stitt is a first-term Republican and an enrolled citizen of the Cherokee Nation. He used Monday’s address to present his executive budget proposal and renew his criticism of McGirt. “From the beginning, I’ve sounded the alarm on the Supreme Court’s McGirt decision,” Stitt said. “Oklahoma has been robbed of the authority to prosecute crimes.” The governor cited the state’s district attorneys, law enforcement leaders, and municipalities as supporting the returning jurisdiction to the state.

Stitt and Attorney General John O’Connor challenged the McGirt decision to be overturned. On Friday, January 21, 2022, the U.S. Supreme Court announced it will review only one aspect of its decision that changed jurisdiction for much of the eastern part of the state. The Supreme Court rejected the state’s request to consider overturning the entire decision.

Meanwhile in Tulsa, two people were arrested for assault and battery outside the Page Belcher Federal Building, during a protest for Leonard Peltier. Local news reported that an officer was injured and had to be taken to the hospital, after a confrontation that was partially captured by an observer. According to witnesses, the police officer who was injured agitated the peaceful demonstrator.

“He pulls up, parks, and starts agitating,” said Soulowla Williams to News on 6. “And then, he swung first and it’s on hundreds of cameras.”

Because Tulsa is on Indian lands, the Federal Bureau of Investigation (FBI) is leading the investigation into Monday’s incident. Neither organizers of yesterday’s protest in Tulsa nor the FBI have made a statement on the incident.

On Monday, there were at least six organized protests throughout the country advocating for the release of Leonard Peltier. On Friday, January 28, Peltier tested positive for covid-19, alarming many to advocate for his release. Last Friday, Feb. 4, Senator Patrick Leahy used Twitter to urge President Biden to release Leonard Peltier. “I urge Pres. Biden to commute Leonard Peltier's sentence & release him from federal prison. When our criminal justice has been contorted to propagate injustices, the Pres. should use his clemency powers to provide relief. It is the right thing to do.”

This story has been updated to include the tribal affiliations and descendancy of two of the arrestees.