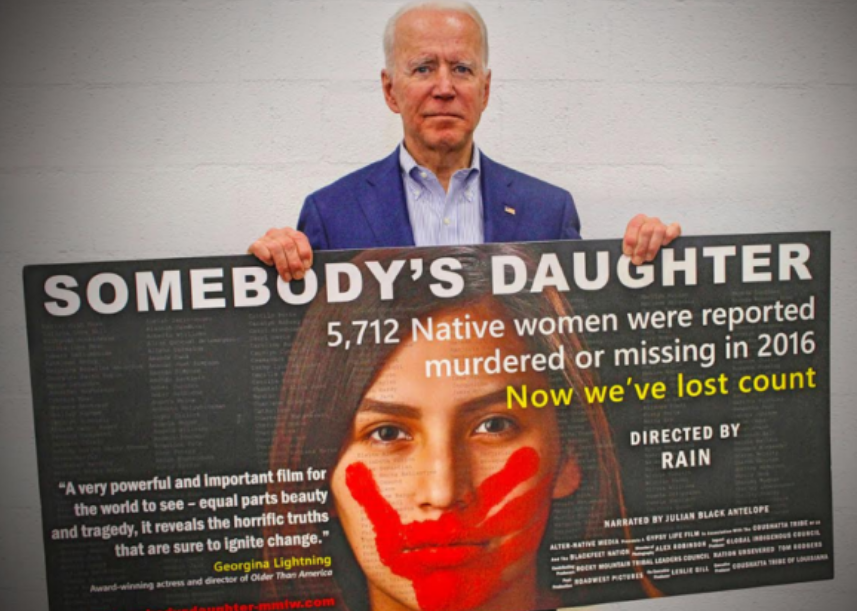 Today, thousands of unsolved cases of missing and murdered Native Americans continue to cry out for justice and healing.  On Missing and Murdered Indigenous Persons Awareness Day, we remember the Indigenous people who we have lost to murder and those who remain missing and commit to working with Tribal Nations to ensure any instance of a missing or murdered person is met with swift and effective action.

Our failure to allocate the necessary resources and muster the necessary commitment to addressing and preventing this ongoing tragedy not only demeans the dignity and humanity of each person who goes missing or is murdered, it sends pain and shockwaves across our Tribal communities.  Our treaty and trust responsibilities to Tribal Nations require our best efforts, and our concern for the well-being of these fellow citizens require us to act with urgency.  To this end, our Government must strengthen its support and collaboration with Tribal communities.

My Administration is fully committed to working with Tribal Nations to address the disproportionately high number of missing or murdered Indigenous people, as well as increasing coordination to investigate and resolve these cases and ensure accountability.  I am further committed to addressing the underlying causes behind those numbers, including — among others — sexual violence, human trafficking, domestic violence, violent crime, systemic racism, economic disparities, and substance use and addiction.  Federal partnerships to address the number of missing and murdered Indigenous peoples will be governed by the Nation-to-Nation foundation of our relationship with Tribal governments and respect for Tribal sovereignty and self-determination.  The challenges in Tribal communities are best met by solutions that are informed and shaped by Tribal leaders and Tribal governments.

Tribes across the United States have long worked to provide solutions for their communities.  In April, the Confederated Salish and Kootenai Tribes of the Flathead Indian Reservation, the United States Attorney’s Office for the District of Montana, and the FBI announced the Nation’s first Tribal Community Response Plan, part of a Department of Justice pilot project to address emergent missing person cases in their community.  When someone goes missing, it is often an urgent and time-sensitive situation.  The Tribal community response plan lays out a blueprint for how Tribal law enforcement; local, State, and Federal law enforcement; and community members can respond when someone goes missing from a Tribal community — resolving important issues of jurisdictional overlap and gaps in order to respond swiftly and effectively.  Other Tribes and Native villages such as the Muscogee (Creek) Nation in Oklahoma, Native Village of Unalakleet in Alaska, and the Bay Mills Indian Community in Michigan, are working with Federal partners on their own community response plans.

My Administration has made a priority of helping to solve the issues surrounding Native Americans who go missing and those who are murdered across the United States — including high rates of Native women and girls, including transgender women and girls.  We recognize there is a level of mistrust of the United States Government in many Native communities, stemming from a long history of broken promises, oppression, and trauma. That is why we are pursuing ways to build trust in our Government and the systems designed to provide support to families in need.  We must bridge the gap for families in crisis, provide necessary support services, and support opportunities for healing through holistic community-driven approaches.

I am committed to building on the successes of the 2013 reauthorization of the Violence Against Women Act (VAWA) by supporting the passage of the VAWA Reauthorization of 2021. Among other protections, this bill reaffirms inherent Tribal authority to prosecute certain non-Indian offenders — extending protections from domestic violence and dating violence to Native American victims of sexual violence, stalking, trafficking, child abuse, elder abuse, and assault against law enforcement or justice personnel when crimes are committed on Tribal territory.  Additionally, through the American Rescue Plan we provided an additional $35 million in grants for Tribes to provide temporary housing, assistance, and supportive services to victims of domestic and dating violence, as well as supplemental funding for the StrongHearts Native Helpline, and additional funding for services for sexual assault survivors.

My Administration has also committed to effectively implement the requirements of Savanna’s Act and the Not Invisible Act, legislation focused on combating the issues surrounding missing or murdered Indigenous persons.  The Presidential Task Force on Missing and Murdered American Indians and Alaska Natives continues to convene the Department of Justice, the Department of the Interior, and the Department of Health and Human Services, to address the issues from a combined public health–public safety partnership.  Furthering the efforts of the task force, the White House Council on Native American Affairs will bring together all relevant Federal agencies to work with Tribal Nations on exploring additional ways to enhance prevention efforts and improve access to safety and justice.

Furthermore, informed by Tribal input, the Department of the Interior recently established the Missing & Murdered Unit (MMU) within the Bureau of Indian Affairs Office of Justice Services to provide leadership and direction for cross-departmental and interagency work involving missing and murdered American Indians and Alaska Natives.  The MMU will help bring the weight of the Federal Government to bear when investigating these cases and marshal law enforcement resources across Federal agencies and throughout Indian country.

Our commitment to addressing these issues and to strengthening these critical partnerships is unwavering.  For too long, there has been too much sorrow and worry.  United by our mutual investment in healthy, safe communities, we will work together to achieve lasting progress.

NOW, THEREFORE, I, JOSEPH R. BIDEN JR., President of the United States of America, by virtue of the authority vested in me by the Constitution and the laws of the United States, do hereby proclaim May 5, 2021, as Missing and Murdered Indigenous Persons Awareness Day.  I call on all Americans and ask all levels of government to support Tribal governments and Tribal communities’ efforts to increase awareness of the issue of missing and murdered American Indians and Alaska Natives through appropriate programs and activities.

IN WITNESS WHEREOF, I have hereunto set my hand this fourth day of May, in the year of our Lord two thousand twenty-one, and of the Independence of the United States of America the two hundred and forty-fifth.