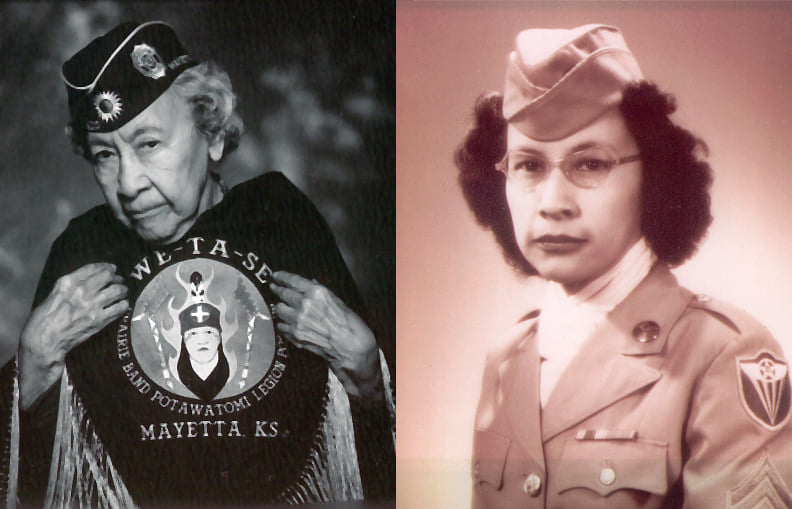 The Prairie Band Potawatomi Nation is mourning the passing of Julia Kabance, who was the Kansas tribe’s oldest living citizen and a World II veteran. She died on Tuesday, Nov. 16, 2021. Kabance was 111.

"We are deeply saddened to learn the passing of our oldest member Julia Kabance.  Julia was a proud member of the American Legion Post 410 We Ta Se, for her service in World War II. She was in inspiration to our tribe. My thoughts and prayers go out to her family and friends," Prairie Band Potawatomi Nation Chairman Joseph Rupnick said to Native News Online.

"Julia Kabance lived the life of a Warrior, patriot and respected tribal veteran. She was extraordinary in exhibiting a true zest for life. At her birthday party three years ago held in concert with the Annual Potawatomi Gathering hosted by our tribe she was a beautiful spirit sharing with us stories from the photos on display and instructing us to archive them at the tribal government center. I am sure she will be remembered with the utmost respect."

Born on the Prairie Band Potawatomi Reservation in 1910, she was the 11th out of 12 children. Kabance obtained her education at Haskell Institute, now Haskell Indian Nations University and later the University of Kansas.

According the tribe, Kabance, on March 17, 1943 she joined the Women’s Army Corp (WAC) during World War II and was stationed at McChord Air Force Base in Washington state in the Adjutant Corps.

Honorably discharged in 1945, she returned to civilian life where she continued to give of herself by volunteering for seventeen years at the Veterans Administration in Topeka, Kan. She was active with the Catholic Church and was a life-member of the American Legion We-Ta-Se Post 410.

Kabance remained single her entire life. "I never met the right one. I don’t want to spend the rest of my life with someone I can’t love,” Kabance told TV13 - WIBW, a Kansas television station, on her 108th birthday in an interview.

Her funeral will be held on Saturday, Nov. 20, 2021 at the Assumption Chapel, 200 East Mission Street, Saint Mary's Kan.