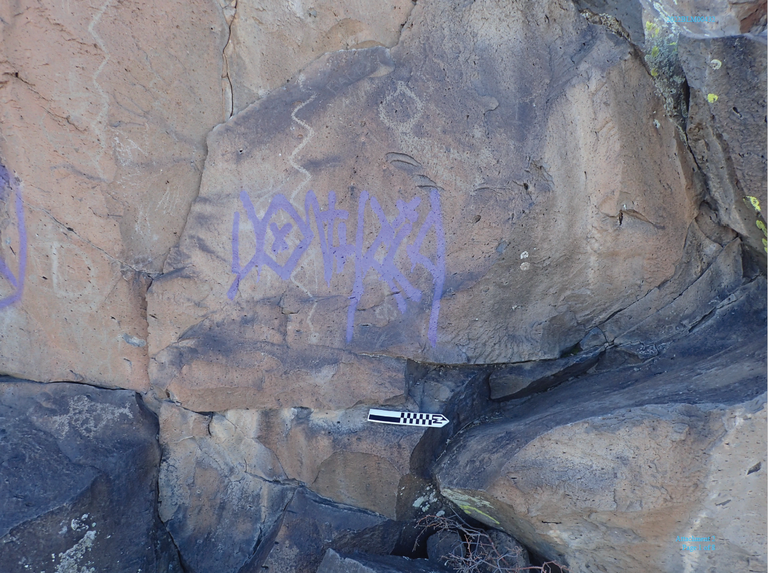 On January 19, the Bureau of Land Management (BLM) reported that graffiti was discovered on property that it manages just west of Santa Fe along the Santa Fe River, the La Cieneguilla Petroglyphs. The Santa Fe New Mexican reported that some of the petroglyphs were defaced with a pentagram, a swastika and several racial slurs. According to the BLM, it was the third time the site had been vandalized in less than a year and the most damaging of the three incidents.

“This area is very sacred to the Pueblo people. We have direct ancestral ties to it, and our oral traditions, prayers, and stories are linked to these places,” said Santa Clara Pueblo’s Tribal Historic Preservation Officer Ben Chavarria to Outside magazine. “We go visit them on pilgrimages, for ceremonial reasons, and to teach future generations about our ancestors, traditions, and culture.”

Most of petroglyphs date between the 13th and 17th centuries, and some are dated older than 8,000 years old, including the iconic hump-backed flute player, Kokopelli.

Under the Archaeological Resources Protection Act, it is a felony to desecrate or deface cultural sites and punishable by up to two years in prison and a $20,000 fine, or both. The Bureau of Land Management has been investigating the incident directly with the Federal Bureau of Investigation and the Santa Fe County Sheriff’s Office, but with little success.

On Monday, the Federal Bureau of Investigation announced that the agency is offering a reward of up to $5,000 for information leading directly to the arrest of the person or persons responsible for the vandalism committed at the La Cieneguilla Petroglyphs in Santa Fe, New Mexico. Some of the vandalism. (Photo Courtesy of the FBI)

Earlier this year, the New Mexico Wilderness Alliance announced that the organization is offering a $5,000 reward leading to the arrest of the individual(s) responsible for the desecration of the La Cieneguilla Petroglyph Site near Santa Fe, New Mexico.

“Visitors from around the world come to New Mexico to admire wonderful Native American cultural resources like the La Cieneguilla Petroglyphs," said Special Agent in Charge Raul Bujanda of the Albuquerque FBI Division in a statement on Monday. "It's hard to believe someone would try to ruin these priceless works of art and show such disrespect for this area’s unique heritage. The FBI is asking anyone with information about this vandalism to come forward so we can ensure this crime doesn't go unpunished.”

Anyone with information about this vandalism is asked to contact the FBI at 1-800-CALL-FBI (225-5324) or online at tips.fbi.gov.