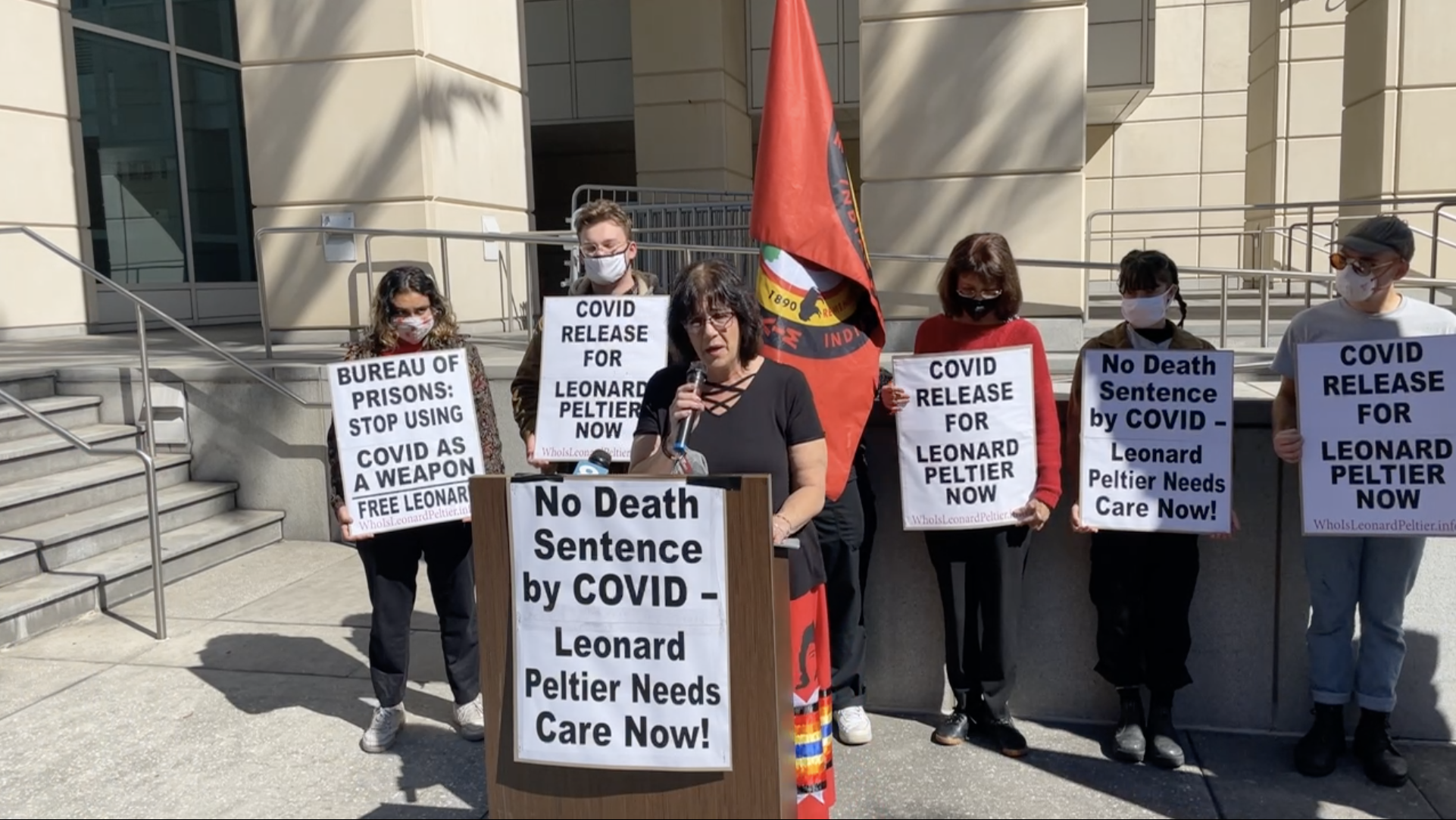 Earlier today, the International Leonard Peltier Defense Committee (ILPDC) hosted a press conference outside the Sam Gibbons United States Courthouse in Tampa, Florida, demanding that he be immediately released to either a more adequate facility or home. Peltier was diagnosed with COVID-19 on Friday and is currently in the maximum security prison facility in Coleman, Florida.

“On Friday morning, I spoke with Leonard on the phone and he was stressed. He had been sick all night long, he was coughing and could hardly breathe,” said ILPDC co-director Carol Gokee during a press conference.

Gokee updated the public on Peltier’s status, including that Peltier was in isolation for 14 days and that if conditions worsen, he’ll be transferred to a hospital. She also shared that she asked Peltier how he thinks he may have caught the virus. She says he reported to her the prison guards weren’t wearing masks.

Peltier, 77, is Anishinaabe, an enrolled member of the Turtle Mountain Reservation in North Dakota, and Lakota. Peltier has spent more than 46 years in federal prison for the conviction of the murders of two FBI agents on the Pine Ridge Indian Reservation in 1975. Peltier’s conviction has been challenged for decades by lawyers, organizations, politicians, and former judges. He suffers from kidney disease, high blood pressure, and diabetes, and his health has been a concern of supporters for years.

ILPDC’s co-director, Jean Roach, a survivor of the FBI shootout that left three dead in, spoke of the genocide of Native people and what she said are “double standards” that Native people have to live through. “We’re tired of the genocide,” Roach said during Monday’s press conference.

A long-time advocate for Peltier’s release, she spoke to the public of the federal government’s treatment of Native people by reminding those in attendance of the murders of some of Indian Country’s most renowned leaders.

“A long time ago, they killed our leaders Sitting Bull, Crazy Horse, and also put them in prison,” said Roach. “They’re doing the same thing to Leonard Peltier.”

Roach also spoke of the effects COVID-19 has had on Native communities. “The numbers for COVID are high for our people,” she said. “We want Leonard in a hospital immediately.”

Others have taken actions since they have heard of Peltier’s positive COVID-19 case on Friday.

“As Native people and public servants, we understand fully the sense of urgency our loved ones are faced with regarding COVID,” said North Dakota Representative Ruth Buffalo to Native News Online. “Add inhumane living conditions, and prison guards who don’t follow CDC guidelines, it is a recipe for disaster.”

Buffalo, a member of the Three Affiliated Tribes in North Dakota, is the first Native American woman elected to the North Dakota House of Representatives and currently the Vice Chair of the National Caucus of Native American State Legislators. On Monday, she organized a letter asking for the immediate release of Leonard Peltier to President Biden, U.S. Attorney General Merrick Garland, Director of Federal Bureau of Prison Michael Carvajan, and Southeast Regional Director of the Bureau of Prisons J.A. Keller..

“We request that Mr. Peltier be immediately released to serve the remainder of his sentence in extended home confinement or hospital care, recognizing the increased infectivity of the Omicron variant among the general and incarcerated populace,” said the National Caucus of Native American State Legislators letter on Monday.

Two days ago, the ILPDC started a petition on change.org asking for signatures supporting to hospitalize Leonard Peltier and to demand President Joe Biden grant Peltier clemency. As of this press time, more than 3,300 people have signed the petition asking for Peltier’s release.

“Even if Mr. Peltier had not been convicted under contested circumstances, his advanced age, ill health and the amount of time he’s served ought to be enough to reconsider his circumstances,” said Buffalo of Peltier. “We are beyond the stage of making an example, and sheer human compassion and clemency urgently needs to be considered. Continued imprisonment is surely a death sentence.”