Opinion: The Absurdity of Rush Limbaugh’s Presidential Medal of Freedom 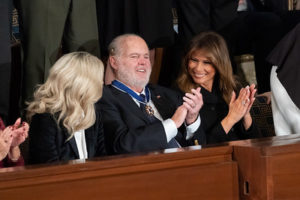 There are some things that happen in life that are hard to comprehend. Such was the case last Tuesday afternoon when my smart phone began to ping several headlines from various news sources that President Donald Trump was going to award Rush Limbaugh the Presidential Medal of Honor, the nation’s highest civilian award.

I did not get beyond the headline alerts and simply put them out of my head and continued to work. Later that night, I heard the president used the State of the Union address as the venue to bestow the prestigious award to Limbaugh. I began to see reruns of the president’s wife up in the House gallery putting the award around Limbaugh’s neck.  This moment came just minutes after the president acknowledged 100-year-old Tuskegee airman Charles McGee.

Limbaugh receiving the Presidential Medal of Freedom made me remember vividly the first time I listened to him on the radio. It was during a ride with a business associate who was in town from Nashville. He politely asked me to change the station so I could hear this man who had an afternoon talk show and was “not afraid to tell it like it is.” Not knowing what I was going to hear, yet wanting to be a good host to my out-of-town guest, I complied and soon heard a bold voice talking in a blunt, demeaning and rude fashion, spewing out things I found offensive and polarizing. As we drove through the city, my passenger, who was something of a good ol’ boy, had a look of admiration on his face, smiling as he took in like a sponge what he obviously enjoyed.

On that day, I decided I would rather stick to NPR, where the tone of thought was not so caustic.

During the intervening years, upon occasion I would hear or read about the outlandish things Limbaugh would rant and rave about. I remember his listeners once jammed some fax machines on Capitol Hill when Limbaugh told them to fax their members of Congress.

Through the years, under the guise of conservatism, Limbaugh told Americans who they should hate, such as Democrats, the Clintons, the Obamas, African Americans, Mexicans, and so on.

Back in September 2009, Limbaugh even mocked the fact some 90 million Indigenous people of this land were wiped out through the holocaust (we, Native people, label the vast killing of our ancestors as genocide) and with four million left, we should be happy because we have casinos.

The direct quote was: “They all have casinos. What’s there to complain about?”

Then, one Thanksgiving week, he even took the opportunity to say Native Americans have killed more white Americans because Natives introduced them to tobacco. Of course, as usual with Limbaugh style, he did not tell the whole story. He conveniently left out our ancestors did not put a bunch of deadly chemicals into the tobacco they used for ceremonial purposes and didn’t consume it to the point of two-packs of cigarettes per day.

Today, we live in a divided nation.

And it did not begin with Donald Trump. He has simply capitalized on what Limbaugh helped start along with Fox News two decades ago. All he had to do is add fuel to the fire of controversy. For several years, I have shared my opinion with friends that the great polarization of America began with Rush Limbaugh, who was a master of polarization and sowing discord. Trump, like Limbaugh, is a master at knowing what code words—or even blunt words—to use to enrage and embolden a whole group of people who seek heroes.

In 1963, President John F. Kennedy established the Presidential Medal of Freedom to those people who have made "an especially meritorious contribution to the security or national interests of the United States, world peace, cultural or other significant public or private endeavors.”

Even though I find it absurd Limbaugh was given the Presidential Medal of Freedom, it makes sense Trump is the president who gave it to Limbaugh. They are two of a kind.