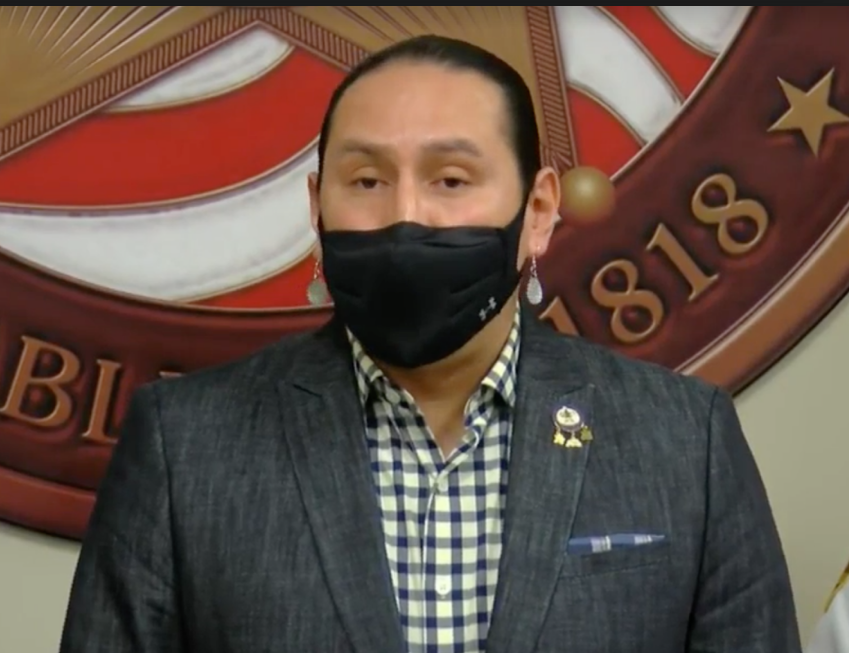 GREEN BAY, Wisc. — The Brown County Sheriff’s Office and the Oneida Nation hosted a press conference on Monday morning providing the community with an update on the targeted shooting at the Oneida Casino Complex, which contains the Radisson Hotel & Conference Center and the Oneida Main Casino that happened Saturday evening at approximately 7:30 p.m. - EDT.

Brown County Sheriff Todd Delain shared that the shooter, who was shot and killed by law enforcement, was a former Duck Creek Kitchen & Bar employee who had been terminated earlier this year. He was 62-year-old Bruce K. Pofahl and a non-tribal citizen living in the greater Brown County area. Pofahl was barred from entering the hotel/casino complex through a restraining order, according to court records.

He was employed as a food and beverage manager at the restaurant, according to an Oneida Nation spokesperson at the press conference.

The shooting took place in the restaurant, away from the casino, according to police dispatch audio. “He’s in the restaurant. Man with hat and glasses,” said an officer. According to Delain, the gunman used a 9mm pistol as a weapon. The sheriff said his office is investigating whether Pofahl was the legal owner of the gun.

The victims who were killed are: 35-year-old Jacob Bartel and 32-year-old Ian Simpson. They were also identified as Duck Creek Kitchen & Bar employees and are non-tribal citizens. They were killed at close range by a 9mm handgun with approximately 50 patrons in the restaurant said Brown County Sheriff Delain.

A third victim, 28-year-old Daniel Mulligan, was also shot and is currently in stable condition at a hospital in Milwaukee, Wisc. with non-life threatening injuries.

The Wisconsin Department of Criminal Investigation will continue to investigate the officer involved shooting as to who shot and killed the shooter. The motive to the incident is still under investigation, but the Brown County Sheriff shared that that over 230 individuals were interviewed on the incident.

“We appreciate everyone’s support and patience as we work through the investigation,” said Brown County Sheriff Todd Delain. “We are extremely proud of our law enforcement partners and they should be commended for their bravery to enter an active shooter situation.”

Oneida Nation Vice Chairman responded to questions about the security at the Oneida Casino and Radisson Hotel.

“We’re definitely are going to be looking at security for the hotel for our next best steps,” Oneida Vice Chairman Brandon Stevens said at the press conference. “A casino is a like a mall, there are multiple entrances and exits, but unlike the casino, the hotel doesn’t have security that checks people as they enter the facility. Our focus is how we can do this better and how we can keep our patrons safe.”

The Radisson Hotel and Conference Center, where the Duck Creek Kitchen & Bar is located, is the official Green Bay hotel of the Green Bay Packers. On Sunday the team released the following statement:

“Our thoughts are with all our friends with the Oneida Nation after the senseless and tragic shooting that took place last night. We extend our condolences to the family and friends of those who lost their lives, and we appreciate the actions of law enforcement officials in reacting to the dangerous situation.”