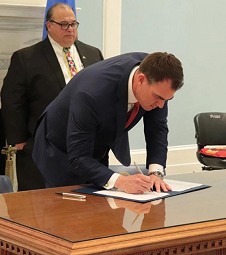 Documents obtained by KOSU show Oklahoma Gov. Kevin Stitt has retained outside legal counsel in an effort to advance contested gaming compacts with four Oklahoma tribes, and state legislative leaders didn’t know anything about it.

This article was initially published by the Native Oklahoma Magazine. Used with permission. All rights reserved.

In a notice sent to Timothy J. Kelly, a judge in the United States District Court for the District of Columbia dated October 11, 2022, the attorneys retained by the governor cite the Oklahoma v. Castro-Huerta ruling as a reason for wanting to dismiss a 2020 lawsuit by Citizen Potawatomi Nation, Cherokee Nation, Choctaw Nation and Chickasaw Nation, The four tribes were seeking to stop gaming compacts Stitt signed with four other tribes.

The compacts in question

The compacts the Governor signed with the Otoe-Missouria Tribe, Comanche Nation, United Keetoowah Band of the Cherokees and Kialegee Tribal Town were controversial from the beginning.

The agreements were signed in the months after the majority of tribes in Oklahoma believed the Model Gaming Compact between the state of Oklahoma and the tribes had automatically renewed.

"Moving forward, the state will continue to negotiate with individual tribes, leaving behind the one-size-fits-all approach to the model gaming compacts," Stitt said at a press conference on April 21, 2020, the day he signed compacts with the Otoe-Missouria and Comanche Nation.

Then-Oklahoma Attorney General Mike Hunter sent a letter to the United States Department of Interior on May 5, 2020, saying Stitt didn’t have the authority under the Indian Gaming Regulatory Act to enter into the compacts. In his message to the Department, Hunter said allowing the new compacts to go into effect would damage the relationship between the state and the tribes.

"Moreover, for all tribes in Oklahoma, approval of these agreements as gaming compacts will only cause greater confusion and uncertainty about how state-tribal relations should be appropriately conducted," Hunter said.

Oklahoma Senate Pro Tempore Greg Treat and Speaker of the House Charles McCall filed a lawsuit against Stitt in 2020 questioning the Governor’s authority to sign the compacts without the legislature’s consent. The Oklahoma Supreme Court ruled in their favor saying the compacts the Governor signed weren’t valid.

"Regarding state-tribal gaming law, the records of the Legislature and the law itself clearly show state-tribal gaming was always intended to be handled jointly, by both the legislative and executive branches of the State of Oklahoma. On this matter and many others, the legislative branch sets the policy and the executive branch executes the policy. The policy the Legislature has set at this time does not grant the executive the authority to unilaterally enter into the type of agreements signed yesterday," wrote McCall in a letter to Stitt dated April 22, 2020.

In August 2020, Stitt petitioned the Oklahoma Supreme Court to rehear the case. That request was later denied.

The matter remained dormant for more than a year as tensions continued between the Governor and tribal nations over a number of issues — criminal jurisdiction in Indian Country, hunting and fishing compacts and taxation.

In a move that appears to have been done in secret, Stitt has retained Washington D.C. based law firms Sullivan and Cromwell, and Troutman, Pepper, Hamilton and Sanders.

Counsel sent a message to Judge Timothy J. Kelly filed in United States District Court for the District of Columbia court earlier this month to argue the compacts are valid and to notify the court they intend to file a motion to dismiss the case against the agreements that had been brought by Citizen Potawatomi Nation, Cherokee Nation, Choctaw Nation and Chickasaw Nation.

The message to the Court read:

"On June 29, 2022, the Supreme Court issued its decision in Oklahoma v. Castro-Huerta, 142 S. Ct. 2486 (2022), holding that Oklahoma has jurisdiction to prosecute crimes committed by non-Indians against Indians in Indian country. In the wake of that groundbreaking decision, the Governor has conducted a review of pending litigation involving Oklahoma Tribes and the State. As a result of that review, Governor Stitt has retained the undersigned and now intends to assert the defense that [the complaint] fails to state a claim upon which relief can be granted. . . . As grounds for seeking that relief, the Governor expects to make additional arguments concerning the validity of the compacts at issue that the parties have not yet fully presented. In particular, the Governor will explain why . . . the underlying compacts are valid as a matter of law."

“It's unclear how the argument of Castro-Huerta would apply to a ruling on gaming through the Oklahoma Supreme Court,” said Stephen Greetham, Outside Counsel for Chickasaw Nation. "He's [Stitt] using Castro-Huerta like a magic wand."

When KOSU contacted state legislative leaders to ask if they were privy to the Governor’s decision to hire outside counsel to revive the gaming compacts, neither of them knew anything about it.

"The Governor did not inform this office of the decision or reasoning behind it," said House Speaker Charles McCall (R-Atoka).

And a spokesperson for Pro Tempore Greg Treat, (R-Edmond) told KOSU, "The governor has not made the Pro Tem's office aware."

KOSU reached out to Stitt's office via email twice — on Oct. 14 and Oct. 21 — asking for a comment on this story but received no response.

Tribal nations involved in the lawsuit were also unaware of Stitt's intention to have their lawsuit dismissed.

“This is another example of the Governor spending taxpayer dollars unnecessarily," said Sara Hill, Cherokee Nation Attorney General. "The Oklahoma Supreme Court made it clear that the compacts he’s defending were void a long time ago. I cannot understand why more taxpayer dollars should be used to prop up the actions of the Governor when he won’t even accept the judgment of the state’s own courts.”

Matthew Morgan, Executive Director of the Oklahoma Indian Gaming Association, said he was also surprised by Stitt's move to hire outside counsel.

William Norman is an attorney based in Washington D.C., and his practice regularly deals with tribal gaming compacts. Norman told KOSU that even though the U.S. Department of the Interior allowed the compacts in question to go into effect by not taking official action, that doesn't mean they're legal.

The Indian Gaming Regulatory Act (IGRA) was passed by Congress in 1988 to create economic opportunities for tribal nations. IGRA defines regulations and the role of the Department of the Interior for gaming. Norman said IGRA preempts state law when it comes to defining relationships between states and tribes with regard to gaming in Indian Country.

"So even though the clock ran [out] on the determination to be made by the Department of Interior, those are only valid to the degree that they're otherwise valid," said Norman.

Depending on where the money to retain the attorneys came from, Stitt may not have had the authority to spend it on outside counsel under HB2951, which he signed into law in 2021.

The law created a revolving fund for litigation between the state and the tribes, but it requires all expenditures be approved by a joint committee of the Governor, Speaker of the House and Senate President Pro Tempore.

At the time of publication for this story, the state of Oklahoma had not provided the contracts outlining the cost retaining the attorneys for this case, but other attorneys we talked to said the rate is likely between $800 and $1,200 per hour.

In Oklahoma v. Castro-Huerta, the state of Oklahoma spent $1.4 million with outside firm Weiss, Rifkind, Wharton & Garrison. That was double the original estimate.

There are 130 tribal gaming operations in the state operated by 35 tribes. They are governed by the Model Gaming Compact, which Stitt does not recognize.

The compact was approved by Oklahoma voters in 2004 in an effort to save the state’s horse racing industry. It allowed compacted tribes to operate new gaming machines and card games. Previously, all gaming operations in the state had to be based on bingo.

Compacted tribes agree to pay the state 12 percent of revenue from casinos, and that money is dedicated to Oklahoma’s education system.

Because of the language in the 2004 compact, Stitt and tribal leaders disagreed whether or not the Model Gaming Compact automatically renewed for another 15-year term on January 1, 2020.

The Governor wanted to renegotiate the agreement for a greater percentage of tribal gaming revenue. The tribes declined, pointing to their contributions to state infrastructure and community investments over and above the compacted money dedicated to education.

About The Author
Author: Allison HerreraEmail: This email address is being protected from spambots. You need JavaScript enabled to view it.