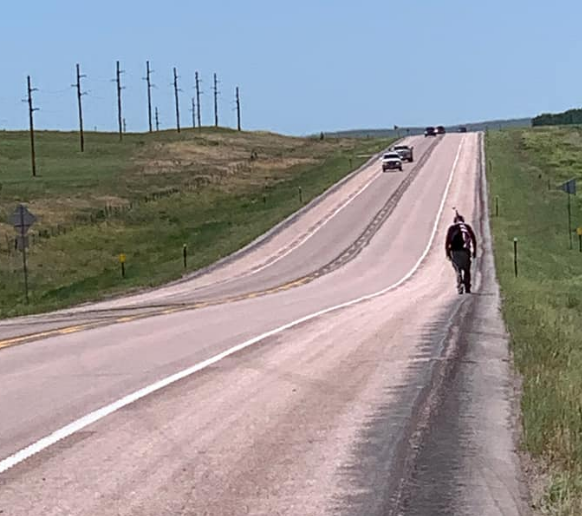 PINE RIDGE INDIAN RESERVATION — Marcus Palmier, 36, a tribal citizen of the Oglala Sioux Tribe, walked 22 miles from his home in Batesland, S.D. to the Veterans Powwow at Pine Ridge Village on the Pine Ridge Indian Reservation on Friday.

His 22-mile walk, under 90-degree temperatures along U.S. 18, was done to bring attention to the 22 veterans who in America on a daily average commit suicide.

Palmier served in his country in the U.S. Army from 2004 to 2011. He was deployed to Iraq and Afghanistan, serving in each country one year each. While deployed, he saw frontline battle and also served on humanitarian missions.

Palmier, who spoke with Native News Online on Friday evening, says he walked for the Til Valhalla Project, an organization committed to reducing veteran suicide.

“Today, I walked for the Valhalla Project. I have been a dark time in my life. Thankfully, I had a support system from my family and co-workers,” Palmier said.

“I have lost five people I served with to suicide. People need to know that when we get home, we still need support,” Palmier explained.

His family and friends put photographs of Palmier, wearing a black t-shirt with the word ARMY on yellow letters on it, carrying an American flag and a tribal Oglala Sioux Tribe flag as he walked his 22-mile journey.

Palmier knows firsthand what most Americans may not know. There is a severe problem in the United States with the large numbers of veterans who die by suicide.

Between 2005 and 2017, 78,875 veterans committed suicide, according to the most recent data from the Veterans Administration — more than the number of Americans killed in each major military conflict except for World War II and the Civil War.

“Some people may say walking 22 miles is a lot; some may say it was nothing. I do know I got tired. I got hungry and thirsty,” Palmier reflected. “I do know the little pain I felt today is nothing in comparison to the pain those who end up committing suicide have.”

Palmier is a single father with five children, who he shares joint custody with his former wife.