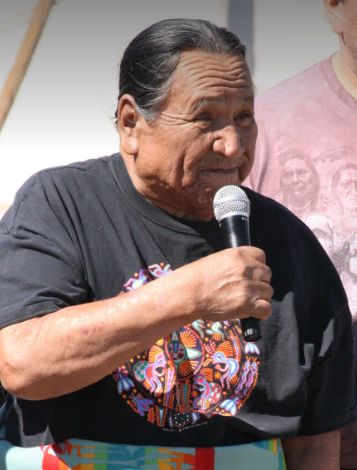 A spiritual leader who was nationally renowned for revitalizing Native American religion and advocating for Native rights, Chief Leonard Crow Dog (Sicangu Lakota), passed away shortly after midnight on Sunday, June 6 on Crow Dog’s Paradise on the Rosebud Indian Reservation. Chief Crow Dog leaves behind his wife JoAnn Crow Dog and many children and grandchildren. He was 78.

“Woke up early this morning and laid there pondering,” Leonard Crow Dog Jr, Chief Crow Dog’s son, said in a post on Facebook. “The teachings of my parents whom now both reside in the spirit world. Respect, compassion, generosity, love, kindness and care.”

Chief Crow Dog, who was descended from a line of four Lakota medicine men, was educated by his parents and elders from the Rosebud Sioux tribe. He learned traditional Lakota traditions, songs, and ceremonies that had been passed down for generations and kept the knowledge alive as a medicine man for the tribe. Later in life, Chief Crow Dog and Richard Erdoes created a book titled Crow Dog: Four Generations of Indian Medicine Men, which told the story of Chief Crow Dog’s influential ancestors. Chief Crow Dog was also a longtime member of the Native American Church.

In 1970, the leadership of the American Indian Movement (AIM) asked Chief Crow Dog to become the organization’s spiritual leader.

“And [Chief Crow Dog] told them, in order for that organization, for that movement to survive, they need to have a spiritual base,” said Lenny Foster (Diné), who was with Chief Crow Dog at key campaigns in AIM’s history, including AIM’s takeover of Wounded Knee in 1973. “So he took them to the sweat lodge ceremony and encouraged their participation in using the pipe in their prayers… he was a strong teacher of conveying these ceremonial ways of not only the Lakota people but the Indian world.”

Chief Crow Dog provided spiritual guidance during AIM campaigns, including protests after the murder of Raymond Yellow Thunder, the Longest Walk protest to Washington D.C, and the siege of Wounded Knee, among other AIM campaigns. Bordeaux said he was “instrumental in promoting the passage of American Indian Religious Freedom Act” in 1978 in a statement on indianz.com.

In 1973, the American Indian Movement occupied the hamlet of Wounded Knee for 71 days in protest of the Oglala Lakota tribal government, which was aligned with the goals of the U.S. federal government. During the following siege by U.S. law enforcement, Crow Dog treated wounded AIM members with traditional herbal medicine and led a Ghost Dance. He was jailed by the U.S. government following Wounded Knee and released after two years due to public pressure.

Chief Crow Dog was a spiritual leader and elder in the Rosebud Sioux tribe until the end of his life. He granted forgiveness in a December 2016 ceremony at Standing Rock where veterans apologized for the harm they, and the United States as a whole, caused Native Americans. On May 19, he advocated for the reclamation of the Black Hills at the Oceti Sakowin gathering of Sioux tribes.

“We’re not white people, we’re Lakota. And that’s basically the basis for how I’m [going to] look at him is be proud of who you are,” Bordeaux said. “Pray. And continue our ways. That’s his story. Always take care of the young ones, future generations, make sure they’re okay. Make a future for them. All the stories come down around that.”

Traditional Lakota services were held for Chief Crow Dog at noon on Monday at Crow Dog’s Paradise near Rosebud, South Dakota and were followed by burial services. The Rosebud Sioux tribe was closed Monday in his honor and will fly all flags at half staff all week.