Obama Joins Biden to Rally to Win Back Michigan 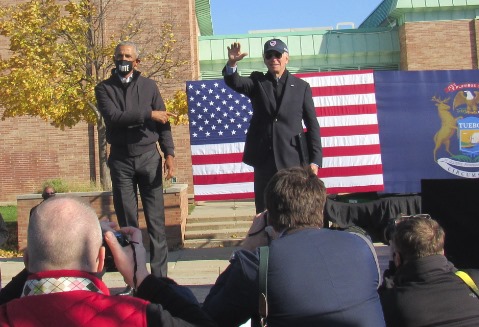 FLINT, Mich. — With only three days left before Election Day, the Biden for President campaign made a stop in Flint, Mich. on a breezy Saturday afternoon. The campaign brought the Democratic Party’s top gun, President Barack Obama, to rally Michigan voters to cast their ballots for his former vice president.

It was the first time Democratic Party nominee Joe Biden and Obama spoke from the same stage during this election year. The setting was outside Northwestern High School in Flint where Obama visited while president during the Flint water crisis.

Because of the Covid-19 pandemic, the Biden campaign hosts smaller rallies called drive-in car rallies as opposed to the rallies President Trump hosts that bring in thousands of Trump supporters despite surging cases of Covid-19. Obama, during his remarks, noted a Stanford University study that was released earlier Saturday that found 18 Trump rallies between June and September may have resulted in as many as 30,000 coronavirus cases and 700 deaths.

Saturday’s drive-in rally tracked 179 cars that filled the high school’s parking lot. A few people left their vehicles but were monitored by security to practice safe distancing. All wore facial masks that prompted Obama to say, “Happy Halloween. I love your masks.”

Obama went on to say that Tuesday is the most important election of our lifetime.

“You can choose a better America,” Obama said as he slammed President Trump repeatedly for how he has conducted himself as president.

“I never thought Donald Trump would embrace my vision, I understood he didn’t agree with my policies, but I did hope for the country’s sake that he would show some interest in the job, that he might take the job seriously," Obama said. “He never has. He hasn’t shown any interest in doing the work or helping anybody but himself or his friends.”

The former president said Trump completely mishandled the pandemic that has left almost 230,000 dead. Obama compared the United States to Canada, which has taken a more aggressive approach to fighting Covid-19 since the outbreak reached North America earlier this year and has only led to about 10,000 deaths nationwide.

Biden, in his remarks, said the first thing to do to rid America of the coronavirus is to get rid of Donald Trump on Election Day.

"People of this nation have suffered and have sacrificed for nine months, none more so than the doctors and front-line health care workers, and this president is questioning their character, their integrity, their commitment to their fellow Americans? It's more than offensive. It's a disgrace.” Biden said.

After Biden's remarks, Obama came back on stage to congratulate his former vice president. The two left the stage to Stevie Wonder's "Signed, Sealed and Delivered" as they made their way to Detroit for an evenng rally to mobilize yet more Michigan voters.