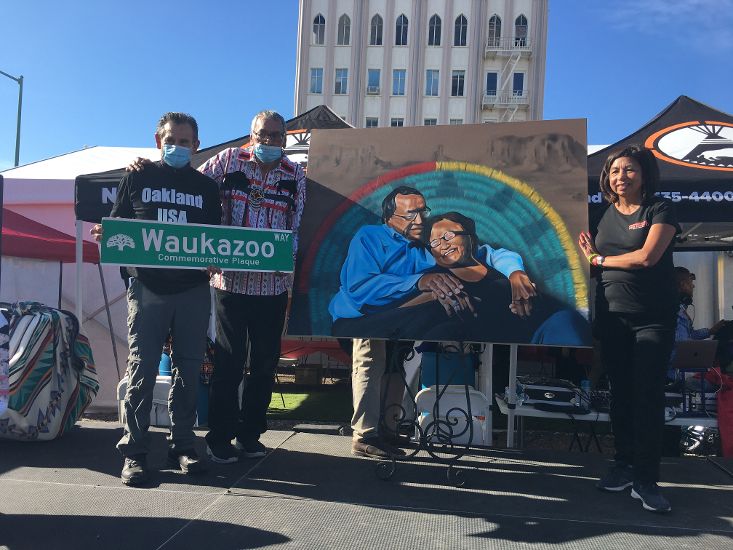 OAKLAND, Cailf. — Hundreds of Native Americans and non-Native Oaklanders attended a special ceremony to officially change the name of 31st Ave. in the Fruitvale neighborhood of East Oakland, Calif. to Waukazoo Way. The ceremony was in honor of the commitment of executive director and founder of the Native American Health Center (NAHC) Martin (Marty) Waukazoo and his late wife Helen Devore Waukazoo.

The commemorative street name change was sponsored by Oakland City Council member Noel Gallo whose district is the Fruitvale area of Oakland (District 5). Councilman Gallo has been a long-time supporter of the Oakland American Indian community and all of the various non-profit organizations that support and work together with the Native American Health Center.

In addition to the street name change, a portrait was commissioned by local Oakland artist Francisco Sanchez of the Waukazoos. Marty began the Native American Health Center and his late wife Helen began the Friendship House Association of American Indians, a residential alcohol and drug treatment center located in San Francisco in the 1970s. Both were extremely dedicated and committed to their work helping the Native American community members in the greater San Francisco bay area.

As Marty Waukazoo took the podium to speak, it was clear that as he approaches some sort of active retirement, he has mentored many who will carry on his vision. He summed up by telling the audience, “Here at the Native American Health Center we have worked hard to provide holistic health care for all our tribal people in Oakland and beyond. Our vision has been to provide excellent medical, dental, mental health within a model that encompasses the physical, cultural, spiritual, and is rooted in our tribal knowledge. We have also reached out to all communities here in Oakland, the Latino/Latina, Asian and Pacific Islander, African American, basically anyone who is in need of health care. We serve everyone interested in health care and no one is turned away. Our vision is better health for the entire City of Oakland."

Oakland Mayor Libby Schaaf spoke of her many years of friendship with Marty. "Marty, when I first began as a council member some fifteen years ago, you were one of the first people I met. I have also bore witness to the health and leadership you have demanded and provided for your community. You walk tall both figuratively and literally as one of our outstanding Oakland and bay area leaders because of your love, generosity, and wisdom. The Native American community here in Oakland has the largest demographic of COVID-19 vaccinations of any community. On behalf of Oakland, we thank you," said Schaaf. Native American Health Center has conducted over 60,000 covid 19 tests, and given over 20,000 covid 19 vaccinations since vaccinations were offered in Alameda county 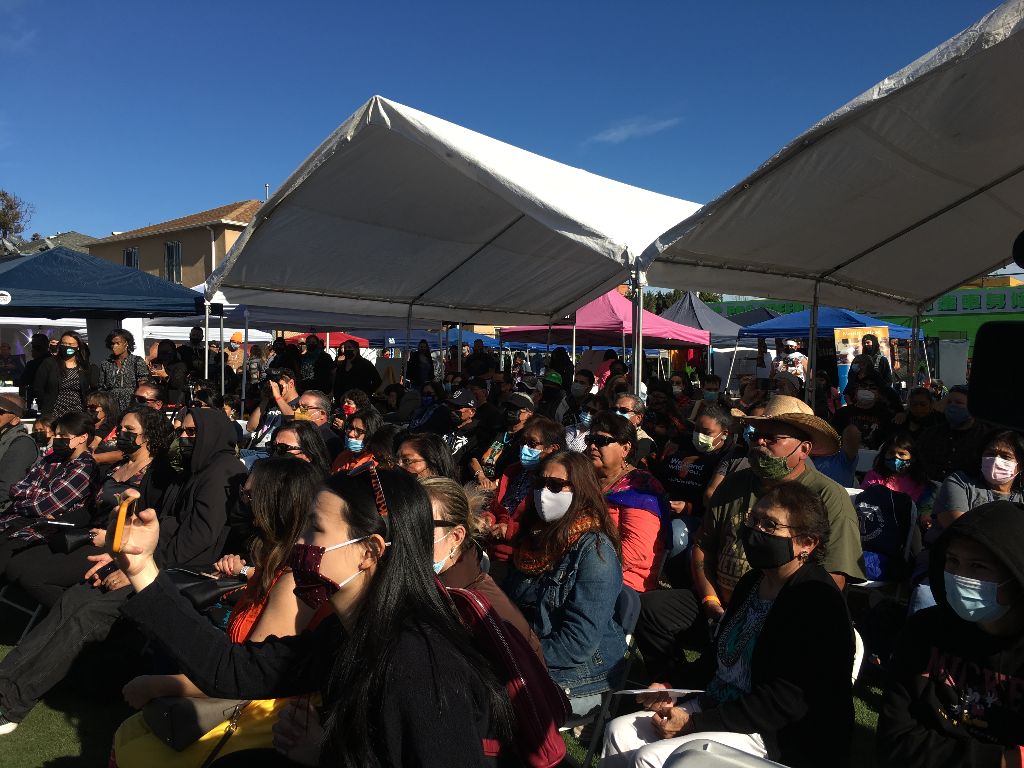 The crowd at the street renaming ceremony. (Photo/Nanette Deetz)

Karen Waukazoo, daughter of Marty and Helen, also spoke of her life growing up with such noted and dedicated parents. "My parents were both so very dedicated to our community. They were both great parents, he from South Dakota, mom from Arizona. We were a ‘blended family,’ but my Mom hated that word. She would always say, "in my language we have no word for ‘step’ or ‘half’ of anything. If she accepted you as family, you were her family."

Karen spoke of how her parents were extremely professional. "My parents never went to work complaining. They never asked ‘why do I have to do this? Whenever my dad would leave the house, mom would ask him, ‘Where are you going?’ and he would answer, ‘I'm going to help my people.’ Their dedication even extended to us kids. We were often asked to volunteer on the many activities sponsored by the Native American Health Center, and we have the many t-shirts to prove it,” she laughed. "Our home was never chaotic. Mom and dad supported and protected each other. Mom always made a big deal about celebrations. If she were here today, she would be beaming with pride.".

Marty and Helen Waukazoo were born and grew up during a time of intense racism against Native Americans. Helen went to boarding school, and Marty re-located from South Dakota at a similar time. Once they met and married, they began to fulfill lifetime dreams of helping their community not only survive, but thrive. The Native American Health Center now has locations in Oakland, San Francisco, and Richmond, and operates seven k-12 school-based health centers.

In 1982, the Native American Health center bought the property that this ceremony was held on today. In 2022, the Native American Health Center will break ground to begin construction on a health center for youth, and to construct a cultural center that will provide space for at least 300 people to hold speaking engagements, concerts, and continue cultural revival and renewal for the entire community.

Natalie Aguilera, the Chief Administrative Officer for NAHC told the crowd, "Under the leadership of Marty Waukazoo roots have been created for our Native American community here in the San Francisco Bay area. I have worked with Marty for 15 years, and his vision is really about preserving culture and traditions while providing health care for all. When you come to the Native American Health Center, you aren't just seeing a doctor or a dentist, you are also participating actively in your culture and traditions. We provide medical, dental, and mental health wellness but also provide a way to connect with other indigenous community members, share tradition and knowledge, renew language, and much more. After 40 years we are completing the circle begun by Marty Waukazoo and Helen Devore Waukazoo in Oakland."

Nanette Deetz (Dakota, Lakota, Cherokee and German American) holds a B.A. and M.A. from UCLA. She is a published poet whose work has appeared in numerous anthologies, most recently, Red Indian Road West; Poetry from Native California. In 2019 she was awarded a Lifetime Achievement Award from the city of Berkeley for her poetry and activism. She has published articles for Indian Country Today, Tribal Business Journal, Bon Apetit Magazine, Alameda Journal, Contra Costa Times, Mercury News, East Bay Times.