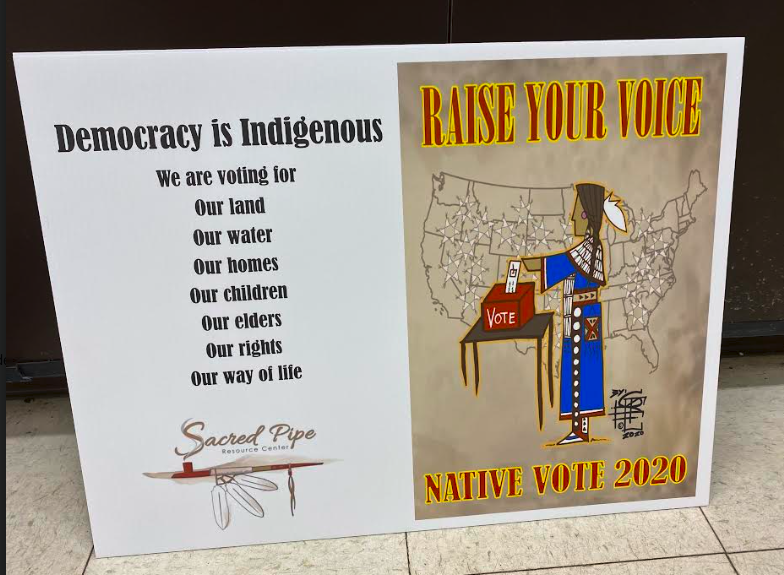 North Dakota is the only state in the nation without some form of voter registration. All an eligible voter needs to do to cast a vote on election day is provide acceptable identification, such as a state or tribal issued identification card that includes a physical address within the voting precinct.

Rooted in the state’s rural character and close-knit communities, North Dakota’s voting system presents challenges for many voters in the state, especially those living on one of the state’s five federally recognized Indian reservations regardless if they’re enrolled in a tribe.

The law in the state requires voters to submit one of four forms of ID that includes the voter’s name, date of birth, and residential address. However, most tribal IDs do not include a residential physical address. One of the reasons why many people living on the state’s Indian reservations do not have a physical mailing address is because they have never been established by tribes or townships. For years, people have been getting their mail delivered to the local U.S. Post Office rather than directly to their homes.

“A lot of our people on the reservations don’t have a physical address because of the lack of infrastructure that still exists,” said Nicole Donaghy, executive director of the nonprofit North Dakota Native Vote (NDNV), which was founded during the 2018 election to help organize and fight back against a voter suppression law that went into effect just weeks before Election Day.

“The law disenfranchised nearly 5,000 Native voters in North Dakota in 2018 because they used their tribal IDs to vote,” Donaghy told Native News Online in an interview.

Though a 2020 settlement between the North Dakota Secretary of State and two federally recognized tribes has eased some of the burdens of the restrictive law, NDNV is determined to make sure that type of interference doesn’t happen again. The organization is focused on civic engagement, electoral work, increasing Native voter participation, and recruiting, training and endorsing Native candidates running for office.

“Voting isn’t free in North Dakota, as many people would believe,” she said. “Travel and time to vote is cumbersome.”

ND Native Vote met earlier this year with North Dakota’s Deputy Secretary of State, the Director of Elections for North Dakota, and county auditors to answer questions about tribally issued ID cards. The meeting opened communication for many with the aim of making voting as simple as possible for voters who only have a tribal ID card.

In Sioux County, some voters on the Standing Rock Indian Reservation have to drive up to 29 miles to vote in Ft. Yates, which is the nearest voting precinct.

Regardless of the challenges that some living on reservation have had to deal with, organizations like NDNV and the Sacred Pipe Resource Center in Mandan, N.D. are dedicated to ensuring people in their communities are comfortable in going to the polls in the upcoming election in November. While NDNV is focused on reservation communities, the Sacred Pipe Resource Center is focused on serving Native voters in urban populations such as Bismarck and Fargo.

“We’ve been involved in civic engagement since the very beginning,” Sacred Pipe Executive Director Cheryl Ann Kary, Ph. D., said in an interview with Native News Online. “It is very difficult to discuss voting in North Dakota because so many Native people feel powerless.”

“Of course their votes matter,” she said. And to encourage some voters, the Sacred Pipe Resource Center created a “Native Vote In Style” initiative where the organization rents a limousine and takes people to the polls to vote.

“People love it because they never get to ride around in a limo,” Kary said.

“Our goals are to inspire voters to believe that their votes can make a difference,” Kary said. “Voting is one of the last few rights we have.”

According to the Bismarck Tribune, Native American people are approximately five percent of the state’s population and getting Native votes to the polls has been key to elections. In 2012, Democrat Senator Heidi Heitkamp won the election by a narrow margin of 0.9% against Republican Rick Berg, North Dakota's sole U.S. Representative. Heitkamp later stated that the Native vote was the only reason she ended up in Washington, D.C.

American Indians, or enrolled citizens of federally recognized tribes, have been allowed to vote in United States elections since the passage of the Indian Citizenship Act in 1924, but have been historically barred in different states from doing so.