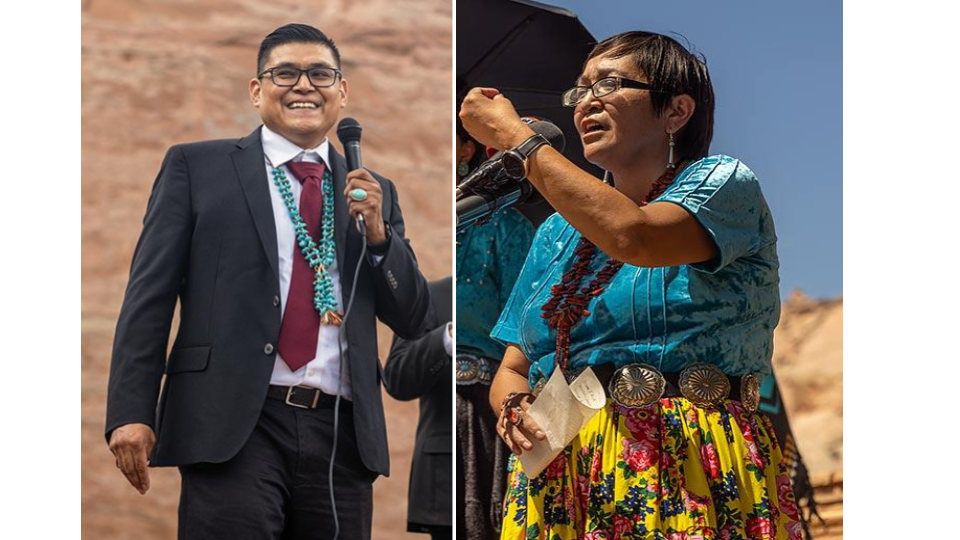 The two candidates running for Navajo Nation president announced their running mates on Monday, according to two reports in the Navajo Times.

Incumbent Jonathan Nez on Monday selected Air Force veteran Chad Abeyta as his running mate. Abeyta, 33, from Alamo, New Mexico, accepted the nomination, which took place at Veterans Memorial Park in Window Rock.  His wife, Paulene Abeyta, their children and his mother and father were present.

Abeyta said the top three priorities for the next vice president are to follow the Nahat’á plan the Nez-Lizer administration began, according to a Navajo Times story about the announcement. Abeyta said his second priority is to bring creative solutions to the table, adding, “And the third thing is to support President Nez and his decisions.”

The other candidate for Navajo Nation president, Buu Nygren, announced he has chosen Na’neelzhiin/Star Lake Chapter President Richelle Montoya, 45, as his running mate, according to a Navajo Times story about the announcement.

Nygren said he chose Montoya because the people wanted a woman to be in leadership and his campaign has always been about the voices of the people, the Time story reported. If she and Nygren are elected, Montoya promised to focus on four priorities: chapters, educators, elders, and veterans.

“Too many times, we’ve heard veterans and elders say that they’re just being used for votes and that nobody talks to them anymore,” Montoya told Navajo Times. “I want to be the person that talks to them, that listens to them, and brings their concerns and their questions back to OPVP (Office of the President and Vice President) so that Dr. (Buu) Nygren can help, along with the executive directors, to get their needs met.”

Nygren made the announcement about Montoya joining his ticket at Navajo Veterans Memorial Park, where incumbent Nez had made his selection known earlier in the day. Montoya was accompanied by her husband, Olsen Montoya, and two of her children.