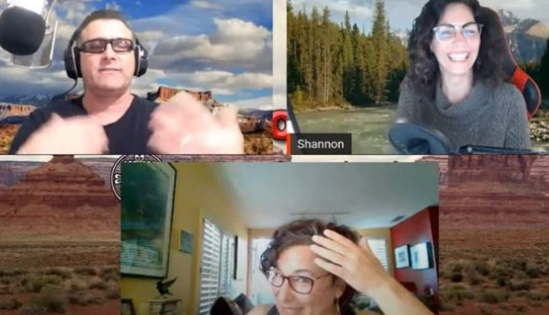 WASHINGTON — A nerve-wracking appearance on one of the world’s most popular podcasts a few months ago led Shannon O’Loughlin (Choctaw Nation) down an unlikely path to co-hosting her own weekly online show, “Red Hoop Talk.”

O'Loughlin, an attorney and executive director of Association on American Indian Affairs, co-hosts the new show, which streams on YouTube, with her longtime friend and “brother” Roy Melendez (Caddo Nation), a former marine.

Launched in mid-April, “Red Hoop Talk” streams on Friday nights (8 p.m. EST). The show features the pair chatting and interviewing guests about the week’s news and important topics throughout Indian Country. While the show digs into serious issues that affect Indian Country, O’Loughlin and Melendez also inject the show with history, culture, storytelling and more than a bit of humor.

“It’s not just news and not just doom and gloom, which is where our lives are right now with Covid-19,” O’Loughlin promised in the first episode of Red Hoop Talk.

The show’s genesis came back in mid-March, when O’Loughlin appeared as a guest on the “Joe Rogan Experience” podcast, a free audio and video show that regularly ranks among the most-downloaded podcasts on Apple iTunes and has a base of 8.7 million subscribers on YouTube.

“I felt extremely uncomfortable and out of my element,” O’Loughlin said.

In an interview with Native News Online, she attributed her nerves to the fact that she hadn’t had time to sit down and meet with Rogan prior to the podcast recording. Still, she held her own throughout the two hour and 40 minute podcast with actor-comic Rogan, who has self-described “obsession” with Native Americans and their history. O’Loughlin spent most of the podcast educating and talking to Rogan about the stereotypes that non-Natives have about what it means to be Native American today, as well as how tribes and tribal citizens got to where they are today. 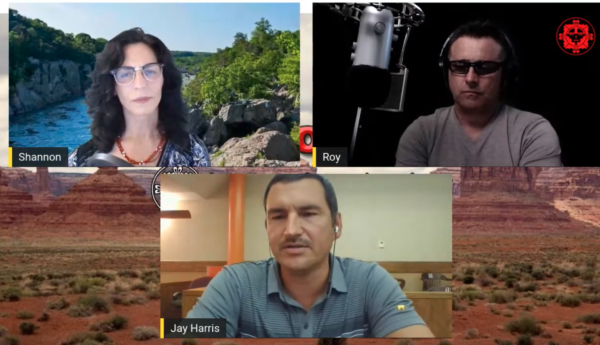 Episode 9's guest was Gerald "Jay" Harris, Crow Tribe and attorney for Big Horn County, Mont., who talked about staying close to culture, knowing your treaties and history“There are so many misconceptions about what it means to be Native American,” she told Rogan. “There’s some kind of fantasy or myth that many people in the U.S. believe about Indians.  It’s not like it’s taught well in schools or part of a normal dialogue.”

After the Rogan podcast, Melendez reached out to her and said, “You know what, we should just do this ourselves. We should be the ones to disseminate the information and the knowledge about our history as Native Americans. That way we can tell our story and not have to meet someone else’s expectations of what a Native American is.”

With the support of the AAIA, they launched “Red Hoop Talk” about a month later to talk about who Native people really are in 2020 and how they got here, according to O’Loughlin.  The show, which has a DIY, work-in-progress feel to it, features some opening talk between the co-hosts and then they bring on a guest.

Melendez said they purposely set out to have guests on the show who may not be well known in Indian Country but are making a difference in their communities and Indian Country as a whole. The show’s format allows for guests to share their knowledge of Indigenous Native American history past and present.

“We really pull from our relations that we have all across Indian Country,” Melendez said. Among the guests who have already appeared are Indian Child Welfare Advocate Jackie Crow Shoe, former Seminole Nation of Oklahoma Chief  Leonard M. Harjo and Walter Ruiz (Gray Wolf), director of the Southern California Chapter of AIM.

As co-hosts, O’Loughlin and Melendez share an easy chemistry, built over three decades of friendship. The two met in the early ‘90s at a Powwow in Long Beach, Calif., where O’Loughlin was a student.

On “Red Hoop”, they tease and pick on each other like siblings, but they also dive deeply into issues that affect Indian Country. O’Loughlin brings a wonkish level of detail to her comments, but laces them with humor and passion. Melendez injects quick wit and regular-guy relatability to the show, as well as a deep curiosity and pointed opinions about the topics being discussed.

They’re well-prepared and gracious interviewers, asking good questions and getting out of the way as guests share their thoughts and experiences. The pair spend time with guests before the show to make sure they feel connected once the show goes live, O’Loughlin said.

When they’re not interviewing guests, the interplay between the co-hosts is fun to watch, like on their ninth episode when O’Loughlin nerds out about sharing a blog that documents the environmental and regulatory rollbacks by the Trump Administration. 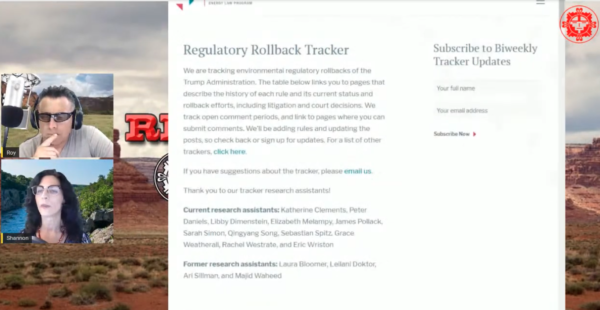 The interplay between the co-hosts is fun to watch, like when O'Loughlin calls up an envirnomental blog.  “I’m sharing this here, it’s from an environmental and energy law program,” she said as the blog appears onscreen.

They both smile, and O’Loughlin continues to talk as she scrolls through the list of energy projects like the Bristol Bay Pebble Mine and Keystone XL Pipeline.  As she talks, Melendez interrupts her.

“Scroll back up,” Melendez said. “See this stuff right here.  Scroll back up to the top.  This is, look guys, this is what this jackass clown of a president has done.”

“Hey, don’t get us kicked off YouTube, man” O’Loughlin said. “We’ve got things to say.”

The “Red Hoop Talk” show is streamed live on Friday nights at 8 p.m. EST.  To join the stream or watch previous episodes, visit the American Association for Indian Affairs YouTube channel. For more information about the show and upcoming guests, visit the AAIA website.