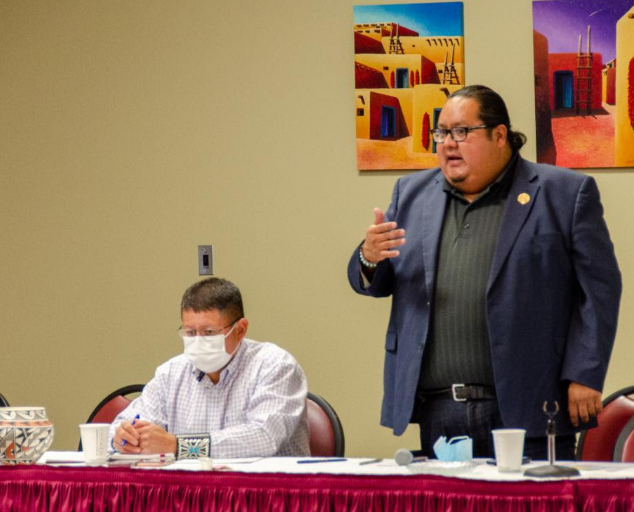 Once every 10 years federal and state districts are drawn up from data released by the U.S. Census. In New Mexico, the state’s legislature will vote in December to approve new redistricting maps.

Working to ensure tribal influence is heard by the state legislature, tribal leaders have been meeting to achieve consensus on tribal redistricting maps for New Mexico. Included in the process has been Navajo Nation President Jonathan Nez, Navajo Council Speaker Seth Damon and members of the 24th Navajo Nation Council.

Representatives from the Navajo Nation Human Rights Commission, All Pueblo Council of Governors, and Jicarilla Apache Nation were also present to provide input.

In March 2021, the New Mexico legislature passed Senate Bill No. 204 that creates an advisory commission to draw federal and state lines utilizing 2020 Census information. The committee continues to receive input during public meetings to then draw three plans for congressional and state district maps.

“If we are not on the same page as tribal nations, it is at the advantage of those against us who want to suppress or limit the votes of our Native communities,” Speaker Seth Damon said in a statement in a press release. “Every day is Indigenous Peoples’ Day for us and we come together to make important decisions to protect the power of the Native vote for our communities. We need one redistricting map that truly represents our tribal nations in New Mexico.”

Final map plans with written evaluations are due to the legislature by Oct 30. State lawmakers then can adopt, modify, or ignore the commission’s proposals.

According to the New Mexico Indian Affairs Department, there are approximately 228,400 Native American citizens in the state - making it 10.9 percent of the entire population. The Navajo Nation has chapter polling

“It is evident from the data gathered that Navajo voters do not participate in early voting activities, mail-in their ballots or travel to convenience centers that are widely available in urban areas like Albuquerque,” Navajo Nation Human Rights Commission Executive Director Leonard Gorman said. “The Navajo people vote in higher numbers on election day, so we have to ensure we make this process easier for them. Our studies show that a Navajo voter pays $20 for fuel to travel to a chapter house and then a state polling location to vote. Their voting experience is completely different to other tribes around New Mexico.”

Following the 2020 Census, New Mexico has apportioned three congressional districts, which was unchanged from 2010. New Mexico's House of Representatives is made up of 70 districts and the State Senate is made up of 42 districts.

Following a day of deliberations, all tribes agreed to submit one redistricting map for the State House of Representatives and to submit two (2) separate maps for the State Senate. The Navajo Nation will be submitting one map for the Public Education Commission while other tribes opted out to comment.

The New Mexico Legislature plans to convene a special session in early December to adopt the final maps submitted from the independent Citizen Redistricting Committee.