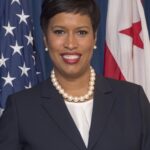 In a radio interview with The Team 980 on Friday, Bowser said, “I think it’s past time for the team to deal with what offends so many people.”

“This is a great franchise with a great history that’s beloved in Washington. And it deserves a name that reflects the affection that we’ve built for the team,” Bowser continued.

“Mayor Bowser’s statement represents a watershed development in Indian Country’s decades-long struggle to remove this and the many other offensive and degrading Native ‘themed’ mascots from sports and popular culture,” NCAI President Sharp said in the statement. “In this historic moment for racial justice, Mayor Bowser’s declaration reflects the growing tide among our nation’s leaders and all Americans to choose respect for Native people and all other people of color by ridding our country of the symbols of racism and intolerance that have long marginalized and dehumanized us.”

In the statement, the NCAI called upon the leaders of professional sports leagues, school systems, and state and local governments across the country to “condemn and abolish these mascots, which cause profound and well-documented harms to Native people, in particular Native youth.”

NCAI is the oldest, largest, and most representative national organization serving American Indian and Alaska Native tribal nations and their citizens, and has been leading Indian Country’s movement to eradicate offensive Native “themed” mascots from sports and popular culture for more than 50 years.